The price of the campaign to finish off the Germans was steep for Canada: 1,544 officers and 29,262 soldiers killed, wounded or captured 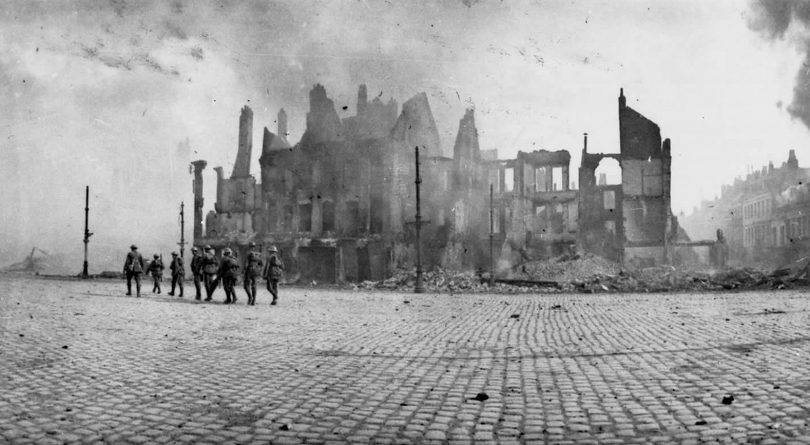 Canadians entering the square in Cambrai, France, with three sides of it on fire, in October 1918 (William Rider-Rider/Atlas Photo Archive/Alamy)

The First World War concluded on Nov. 11, 1918. In commemoration of its 100th anniversary, Maclean’s asked renowned historian J.L. Granatstein to tell the story of Canada’s final push to the end of the war, known as the Hundred Days. Read those dispatches here.

The Canadian Corps had a rest after the Canal du Nord battle, time to restore shattered nerves and rebuild unit strengths with reinforcements. Two divisions held the line a few miles from Cambrai, the Germans sporadically shelling their positions. Meanwhile, British infantry launched an attack on the city’s defences but were repelled.

In the very early morning of Oct. 9, it was the Canadians’ turn, the surprise attack at 1:30 a.m. by the Second and Third Divisions catching the Germans in the midst of a phased retirement to new positions further east. The attackers crossed the Canal de l’Escaut and took prisoners who told them that Cambrai was to be evacuated. But there was still heavy fighting. At the Pont d’Aire, the most important crossing over the canal, a small group of Canadian engineers seized a bridge moments before it was to be destroyed. Capt. Norman Mitchell won the Victoria Cross for his gallantry there, and more engineers quickly threw footbridges across. Additional battalions then mopped up the city outskirts, and soldiers from the Third Division entered the city centre.

Cambrai had been gutted. Whenever the Germans retreated, they habitually destroyed what could not be looted and set fire to buildings and farms where they could. Canadian engineers rushed in to try to control the fires in the city, whose inhabitants were quick to tell them of the hard treatment they had endured through four years of German occupation. One soldier, Robert Shortreed, wrote in a letter home that the enemy “has taken everything he could have … He has done his best to stop us by blowing up all the main roads, bridges etc and what he could not take that would be of value to us he has destroyed. Stacks of hay were still smouldering and all the mines . . . were damaged as much as possible.”

The Germans had begun to seek an armistice, but their actions as they now faced defeat on the battlefield had embittered the French government and people and infuriated the Canadians. Why were the Germans still fighting when it was clear they had lost? And how could they have treated the French so badly? Bombardier Harold Simpson from Bayview, P.E.I., told his family that he was horrified by “the untold suffering … of homeless refugees, widows and orphans made destitute by the war” but now “liberated from hell on earth … Nearly all the girls and women from about 15 years up are certainly in some condition.”

With Cambrai in Canadian hands, with their supply and transport system in northern France gone, the Germans’ aim seemed simply to prolong the war in the faint hope of securing more advantageous terms from the Allies advancing everywhere on the Western Front. But still the German soldiers resisted.

RELATED: The story of a soccer ceasefire in the First World War

Along the Sensée River, the enemy used a number of their few remaining tanks against the advancing Canadians—“My God,” one soldier exclaimed, “look at them houses moving”—and their counterattacks were fierce. Artillery had to be rushed forward to stop the tanks, and the machine guns mounted on the armoured cars of the 2nd Canadian Motor Machine Gun Brigade halted one more German attack very close to the lead Canadian infantry. The weary Canadians were then relieved and replaced by Tommies from the British First Army.

The Canadians had played an extraordinary role in the fighting since the attack on the Drocourt-Quéant Line began on Aug. 26. They had advanced 37 km against the Germans’ strongest defences. They had smashed 31 enemy divisions, taking 16,000 prisoners and killing or wounding thousands more. The four divisions of the Canadian Corps had defeated the enemy in the field in a succession of crucial battles.

But the price had been dreadful: 1,544 officers and 29,262 soldiers killed, wounded or captured. Col. G.W.L. Nicholson’s official history of Canada’s role in the war observed that “casualties were many, but by First World war standards not excessive in the light of their task.” That was true when compared to colossal battles at Verdun or along the Somme, where hundreds of thousands had been killed or wounded, but it was scant comfort to the Canadian casualties or their relatives and friends at home. The mother of Leslie Frost, a future Ontario premier, wrote to her son overseas that “these are such awful days although we are on the winning side now … But there are so many casualties it makes one heartsick and sore.”

The war was almost over, and the Canadians would soon resume chasing the retreating enemy into Belgium.