To live in Toronto is, increasingly, to mourn places, including spots like Sunnybrook Plaza. For locals, these places become imbued with all kinds of personal memories and nostalgia. 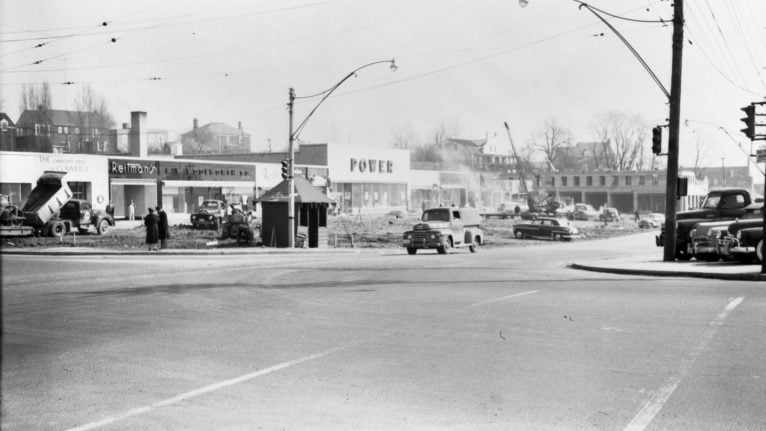 When it opened in 1952, the strip of shops set back from the intersection of Bayview and Eglinton in Toronto’s Leaside neighbourhood inaugurated a whole new era. Postwar affluence, the ascent of affordable automobiles and the suburbanization of North American life meant the end of Main Street-style pedestrian shopping. With plenty of parking and easy access to street-facing shops, Sunnybrook Plaza seemed like the future—its place in history enshrined as Toronto’s first strip mall.

Surveying Sunnybrook in mid-June of 2020, amid the continued coronavirus-related shutdowns, the place seems extra-abandoned. Its empty storefronts—an optician, a jeweller, a dry cleaner, an H&R Block, a UPS Store, a Subway and the rest—sit behind construction fencing, facing off against construction trailers decked out with mock-ups advertising the new, glassier future of the intersection: an LRT station and multi-storey condo units like the kind you’d find anywhere. Its tall, clay-and-cream totem, cataloguing bygone commercial tenants, stands like a hollow monolith of another era. Soon, backhoes and excavators will come for it. Then steamrollers to flatten out the rubble. Then the cranes that tell the story of a city whose whole history can seem like a cycle of destruction and rebuilding.

“Toronto is a mercantile city,” says Daniel Rotsztain, an urban geographer who completed a master’s thesis on strip malls. Torontonians, he says, experience the city as a fundamentally “commercial backdrop.” The idea rings true in an era fraught by concerns of gentrification, where the need for density scrapes against history. To live in Toronto is, increasingly, to mourn places: a favourite roti shop or live music venue, places that can’t keep pace with rising rents and an urban landscape trending toward corporatization and sameness. Against such forces, even a simple strip mall like Sunnybrook—the sort one could be forgiven for taking for granted—becomes suffused with nostalgia.

Shawn Micallef, the author and prodigious urban flâneur, first visited Sunnybrook Plaza shortly after he moved to Toronto to take a job at the nearby CNIB office. “I’d walk down the hill and it felt like a moment in time, frozen in amber or something,” he recalls. “It was actually amber-coloured.”

For Micallef, strip malls like Sunnybrook represent nothing short of “the landscape of Canada” itself. Especially in the 1980s and ’90s, as larger shopping malls sprouted up, strip plazas offered low rents, attracting smaller businesses and restaurateurs priced out of the downtown core. (It’s something of a Toronto cliché that the best Chinese or Indian or Filipino food can be found not in the ostensibly diverse urban centre, but in some unassuming plaza in its outer wards.) For locals, these places become imbued with all kinds of personal memories—birthday lunches, first jobs, awkward high-school dates, formative toots of sloppily rolled joints in parking lots.

For Doug Smith, former proprietor of the plaza’s Wrap-It-Up stationery store, who is described to me as “the mayor” of the plaza during his long tenancy, Sunnybrook was a community hub. “It was my first store in 1985,” he says. “There were a lot of good times there. A lot of good people.” (Among them: astronaut Roberta Bondar, who lived in the neighbourhood and regularly made use of Wrap-It-Up’s Canada Post outlet.) Hybrids of main streets and shopping malls, strips like Sunnybrook drew neighbours together. Smith says that the shuttering (or “redevelopment”) of Sunnybrook spells not just the end of an era for a neighbourhood, but for a certain class of small business. The writing was on the wall, he says, when he closed up shop in 2012. “Fighting all these shopping centres, all these big box stores, the SmartCentres and the Costcos . . . the small neighbourhood stuff was not going to survive.”

It might seem a bit gauche, lamenting the bulldozing of a stationery store or a Subway, and investing commercial real estate with the residue of memory. Rotsztain notes that commercial properties aren’t typically deemed worthy of protection, but adds: “Just because it’s commercial doesn’t mean it’s not worth our attention. Many Tim Hortons are community centres. You can have a rich, nostalgic relation to a placeless place.”

Such placeless places abound at that intersection of Bayview and Eglinton. Hollowed-out Sunnybrook lies just up the hill from a SmartCentre, in the shadow of an Amazon-owned Whole Foods, and abutted to the east by a 24-hour Metro and Beer Store and Shell station. To Micallef, its passing reveals the ways in which the cobbled-together character of memories attached to our surroundings is evolving. “There’s a change from this hodgepodge to a repeating, mall-like blandness,” he worries. “What are the memories people make at big boxes? At Costco?”

While it’s conceivable that families might congregate in the Costco cafeteria to celebrate a graduation over a supper of Kirkland Signature hot dogs, or that bleary-eyed teens may crouch behind one of those SmartCentre statues of shopping cartoon penguins to smoke some lunch-break pot from a pipe crudely fashioned from a pear, such images of a future nostalgia seem altogether soulless. If the decline of Sunnybrook offers a lesson in anything, it’s in how nostalgia is conjured after the fact, and that we may not even realize how much these places and spaces matter until long after the writing’s on the wall.

This article appears in print in the August 2020 issue of Maclean’s magazine with the headline, “Sun sets on the strip.” Subscribe to the monthly print magazine here.