Opinion: Is it a fair exchange when the fresh fruits and vegetables that we feed to our kids come at such a cost to other families and their kids? 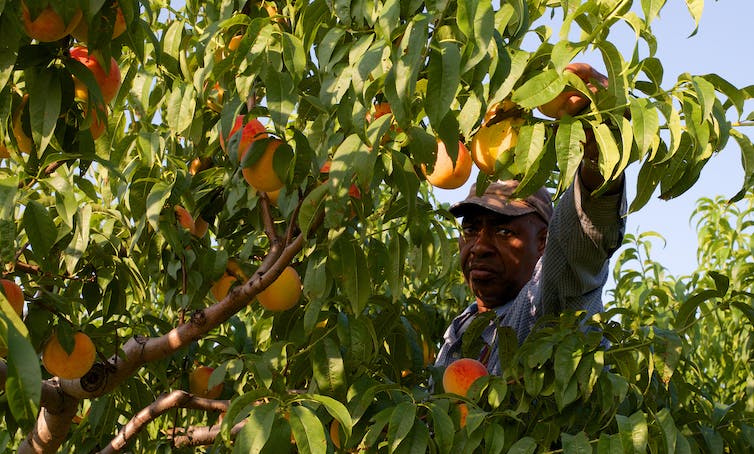 A migrant worker picks peaches in Niagara-on-the-Lake, Ont., in the summer of 2015. (Shutterstock)

When we decide what fresh produce to buy, we check our fruits and vegetables for colour and blemishes, and we make sure the price seems fair.

We’re looking after our families.

But there’s a problem that is not necessarily apparent, even under the bright lights of the produce aisle — one that harms a set of people who are vital to getting Canada’s crops to our tables but get almost no public support.

We’re not looking after their families.

Very often, the farm workers who harvest Canadian apples, tomatoes, onions and other crops are from countries such as Mexico and Jamaica. Countries where work is scarce and the standard of living is far lower than it is here.

Farm work is hard. It is heavy, it can be dangerous, and it often demands six or seven days a week. It pays poorly by Canadian standards — typically minimum wage.

That’s not necessarily attractive to Canadians, who prefer other jobs.

But it does offer a chance for migrant workers to help their families back home.

Some consumers feel that it’s a fair bargain. Farmers get dependable, flexible and affordable labour while migrant workers make money to send home. On the surface, it might seem like everybody wins.

In fact, there is a hidden cost to those workers and to their families.

Most of them come here under the auspices of the federal Seasonal Agricultural Worker Program, which allows farmers to bring labourers to Canada. About 53,000 temporary foreign agricultural worker positions were approved in Canada in 2015, of which 42,000 were through the SAWP.

The main goal of the program is to import labour, not people, creating a system that is flexible and sustainable. Instead, it is unbalanced and harmful to the people who do the labour we need them to do.

Seasonal agricultural workers can only be here for eight months each year. They cannot stay on when they are finished. Their years and sometimes decades of hard work — and their contributions to feeding Canadians —do not earn them any extra right to settle here in Canada.

All the while, they are producing and collecting our food for us, and Canada is deducting taxes and Employment Insurance premiums from their pay without permitting them to access the insurance benefits or rights associated with citizenship.

Cannot collect the EI they pay into

The workers are forced to leave the country after eight months. No one can collect EI from outside the country, so it’s impossible for them to be eligible.

They used to be able to collect parental and maternity benefits through EI, but the Stephen Harper government removed this right in 2012. The Trudeau government has yet to restore it, despite repeated calls from advocates to do so.

The federal government collects mandatory Canada Pension Plan payments, too, but offers only meagre payback when those workers retire in their home countries after giving their bodies to working on our behalf.

The invisible costs, as we have recently described in a paper for the journal Industrial Relations, include the high price that families pay when husbands and fathers leave for months at a time to work. Almost all migrant agricultural labourers — 97 per cent —are men and the vast majority have spouses and children back home.

No one forces them to come to Canada, but lacking viable options at home, they don’t have much of a choice if they want to support their families. This leaves their children without fathers for months each year. And it forces their spouses to shoulder the entire burden of managing their households.

It’s a cruel trade-off. To help their families, these workers have to hurt them.

Hardships for family back home

Ultimately, these hardships can be measured in tangible terms. There are higher rates of illness among these migrant workers’ families back home. Their kids have more mental illness, behavioural problems and trouble in school. Spouses report high levels of stress. Families sometimes fall apart.

Any parent can imagine what it would be like to leave home for eight months, without any chance to return for major family events, including weddings, funerals and graduations. That has a tremendous impact on relationships.

Yet it’s all perfectly legal and fully sanctioned by our federal government. In theory, it’s all voluntary, but in reality, it’s clear these workers have little choice to take the jobs Canadians won’t do — at least not for the pay and working conditions being offered.

Agriculture is a big business, and certainly everyone who has a hand in providing safe, fresh produce to Canadians deserves to make a living. Farmers face the weather and other challenges, including sub-standard living conditions in some cases, for uncertain rewards. Wholesalers and distributors — who are invisible to most consumers — make a significant portion of the retail price. Retailers make almost all the rest.

The hands that pluck the fruits and vegetables — typically brown or black hands, which matters in the racialized calculus of food pricing where folks with darker skins often have to work harder for less — receive only a small fraction of the retail price. Some provinces, including Ontario —where over half the SAWP workers are employed — will not allow agricultural workers to unionize, either.

Fairer access to rights, benefits and job protections, including employment insurance and open work permits, would not make much difference to the retail price, if any.

This brings us back to the question of the true sustainability of our food. Is it a fair exchange when the fresh fruits and vegetables that we feed to our kids come at such a cost to other families and their kids?

Does it matter less to us because we can’t see those kids and their mothers? Or because we delude ourselves into believing their fathers and husbands are satisfied coming here, paying into benefit systems they can never access, leaving their families year after year, with no chance to ever immigrate and build a future together?

Does that apple still taste as sweet when we know that a poor person’s hardships subsidized it for us?

It’s worth thinking about. It shouldn’t be this way.