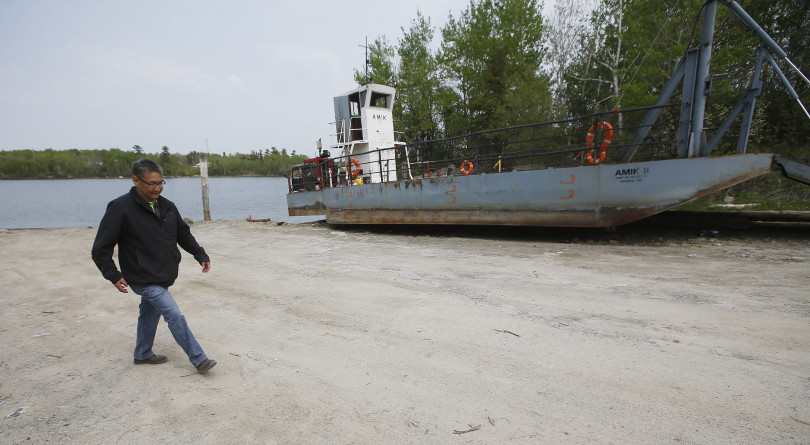 Chief Erwin Redsky of Shoal Lake 40 First Nation walks past the old ferry the community used to get to the mainland, May 30, 2019 (John Woods/CP)

Amik means beaver in Anishinaabemowin, the language of the Anishinaabe and of the 289 residents living on the Shoal Lake 40 First Nation—a number that has dwindled over the years. Amik is also the name given to the rusty, barge-style ferry that served for decades as the community’s only link to mainland Ontario. Most days, the Amik could be seen navigating a narrow channel—its name on the wheelhouse and up to four regular-sized vehicles parked on deck—then docking at nearby Shoal Lake 39, south of the Trans-Canada Highway.

The ferry regularly broke down, stranding residents. There was a winter road that was too dangerous to use during freeze-thaw cycles, and some would risk walking across the ice to escape the isolation. Over the decades, nine lost their lives. Shoal Lake 40 has wanted a road for decades and has tried negotiating with various levels of government. A road, it was understood, would help solve some of its problems. (It’s been under a boil-water advisory since 1997.) A road would set them free.

READ: Not a drop to drink

In June, at long last, the community retired the Amik. Residents held a four-day celebration for the completion of a new road connecting them to the Trans-Canada and the rest of the country for the ﬁrst time in more than a century. In doing so, they closed what the community sees as an obscure but signiﬁcant chapter in Canadian history. “Shoal Lake 40 is an iconic story of a broken relationship,” says Chief Erwin Redsky. “But it can also be the model of the new relationship that needs to take place with Indigenous peoples of Canada.” The way to the mainland is now a small bridge, followed by 24 kilometres of dusty gravel that has an equally iconic name: Freedom Road. As Kenora MP Bob Nault put it during the celebration, it is “much more than rock, sand and asphalt.”

In 1915, Winnipeg decided to draw its water from Shoal Lake. An aqueduct was built: to this day it carries water to Manitoba’s capital, while the First Nation’s water remains untreated. The construction, which cost the city $17 million—a sizable amount for the time—and required authority from both Manitoba and Ontario, forced members off their traditional lands and onto a nearby peninsula. Then, to divert murky water away from the system’s intake, crews dug a channel on the side of the peninsula that is located in Manitoba, surrounding the First Nation with water. Surveyors remarked at the time that the land was largely uninhabited “with the exception of a few Indians.” Redsky says the expropriation separated his people from more than 1,400 hectares of ancestral territory: “And we’ve been stranded on this man-made island for the past 100 years.”

The Freedom Road project was an eight-year effort between Shoal Lake 40, Ottawa, Manitoba, Winnipeg, other First Nations and the International Joint Commission, a U.S. and Canadian body that oversees shared-water issues. Shoal Lake 40 grabbed national attention when its members used a brassy campaign tactic, protesting outside Winnipeg’s Canadian Museum for Human Rights in 2014 to point out a glaring contradiction: the water flowing through the museum’s taps came from an isolated community without clean water and a road. Hundreds marched on the city’s streets, supported by dozens of churches and the popular Christian musician, Steve Bell. In 2016, the three jurisdictions agreed to cost-share the $30 million road. (Prime Minister Justin Trudeau visited the First Nation the same year, water jugs in tow.) 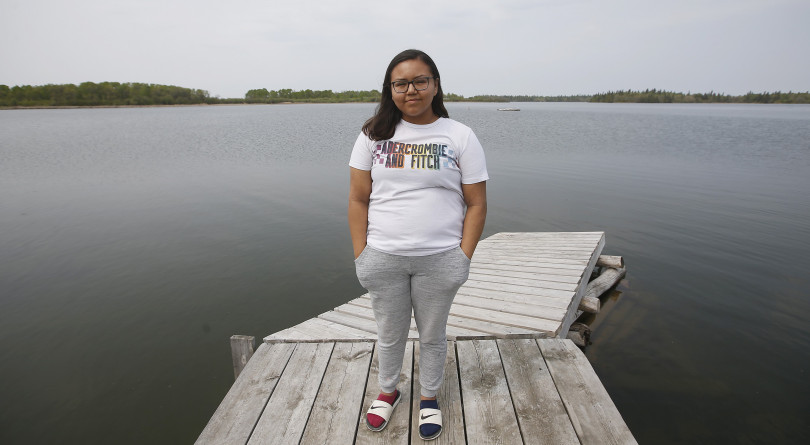 Ainsley Redsky, a 17-year-old member of Shoal Lake 40, says faces lit up when Freedom Road opened and have not dimmed since: “It felt like we didn’t really have nothing to live for. I thought I wasn’t going to see a road. It was just an awful feeling. I think all the youth here in Shoal Lake all kind of felt the same.”

Ainsley could skate by the time she could walk. A talented hockey player, she regularly hauled her gear across the frozen lake on foot, her grandma beside her, to catch rides to tournaments. She expects Freedom Road to pave the way for improvements: better housing and infrastructure; quicker access for ﬁrst responders; health services for expecting mothers; easier water deliveries. “Now that the road is actually there and I’ve driven on it with my family and I’ve seen it with my own eyes, I think I can ﬁnally say I have hope for this community,” she says.

Band councillor Roxanne Greene has always considered her people to be “professional crisis solvers” but allows that Freedom Road has already solved long-standing frustrations. Events such as powwows no longer need to be held only in winter, when a frozen road is available. Groceries no longer need to be hauled in sleds or canoes. They no longer need to abide by a de facto midnight curfew, the time of the last ferry sailing.

About the only unresolved question is what to do with the Amik. “Some of us have a love-hate relationship with the barge,” Greene laughs. “I’d like to sink the damn thing. We’ve been kept at its mercy for so many years. Some people want to keep it for emergencies. Some people want to keep it because of the memories it holds for them. At the end of the day, if we’re able to sell the barge, that might mean one more house for the community.”

Chief Redsky agrees. Their former lifeline is ofﬁcially up for sale, drawing interest from First Nations neighbours who might use it to reach nearby islands for ceremonies. Maintenance has been costly, though, and the 30-year-old vessel is tired. Yet Redsky believes it has some life left. “Hopefully somebody takes it over,” he says. “The beaver belongs in the water.”

This article appears in print in the September 2019 issue of Maclean’s magazine with the headline, “Bridging a bitter divide.” Subscribe to the monthly print magazine here.