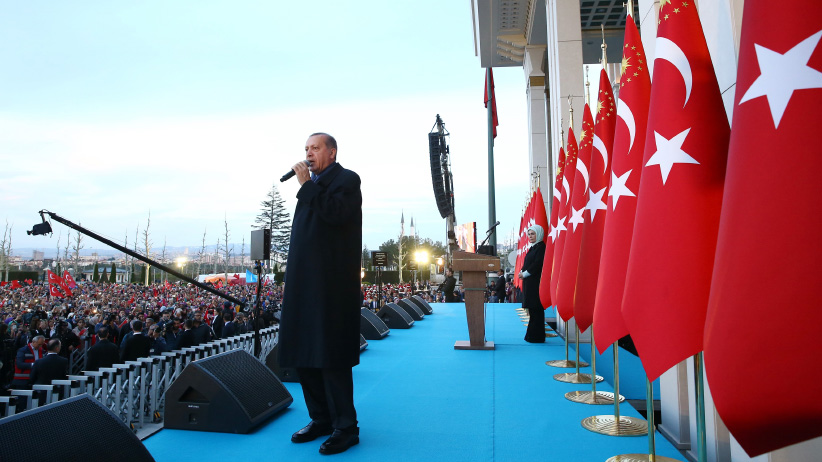 Turkish President Recep Tayyip Erdogan addresses the crowd, who are celebrating the results of the referendum, at the Presidential Complex in Ankara, Turkey on April 17, 2017. (Kayhan Ozer/Anadolu Agency/Getty Images)

Early last August, a group of Somali community leaders was invited to the Turkish consulate in Toronto to meet with some Turkish parliamentarians. The meeting was one leg of a Canadian tour for the visiting politicians, which also included trips to Ottawa and Montreal, and the theme of the tour was the July 15 attempted military coup in Turkey. The Turks, armed with a narrative worthy of a John Le Carre novel, laid out the details of how a secretive cult, with tentacles stretching around the world, had, over decades, infiltrated the power centres of the Turkish state, culminating in the violent attempt to overthrow the democratically elected government.

The group of 20 or so Somalis who were present greeted the Turkish delegation warmly. In 2011, Turkey rescued Somalia from a punishing famine and has continued to provide the Somalis with hundreds of millions of dollars in aid. “Anybody who cares about Somalia, cares about Turkey,” one attendee, Issa Muse, stood up and proclaimed.

The Turkish government has also cultivated a strong relationship with Canada’s Somali community, the largest Somali diaspora in the world. Liberal MP Ahmed Hussen, who arrived in Canada as a refugee from Somalia in 1993, was present at the Toronto meeting. He had developed close ties with Turkey’s ruling elite during his tenure as president of the Somali Canadian Congress.

MORE: Turkey is the new ‘sick man’ of Europe

Normally, a meeting like this would hardly raise eyebrows, but there was nothing normal about Turkey in August 2016. The coup attempt, which left hundreds dead and saw tens of thousands of civilians flood the streets to confront the putschists, left deep scars. In its aftermath, the ruling AK Party, led by Recep Tayyip Erdogan, declared a state of emergency and launched a massive purge to weed out what it described as the terrorist “parallel structure” responsible for the attack, the Gülen movement.

Hussen was in Istanbul on the night of the coup attempt, reportedly on vacation with his mother. But, according to local sources, he was also there as a guest of some high-level AK Party politicians, including Kenan Sahin, the mayor of Istanbul’s Pendik district, and Cemalettin Kani Torun, the deputy chairman of the Parliamentary Foreign Affairs Commission. The next day, he described what he experienced that night to Canadian media in glowing terms.

Others saw something very different. Some observers noted that nightly “democracy” rallies organized by the AK Party were infused with rhetoric that would make most democrats cringe. Erdogan was lauded as the saviour of the nation; songs were written in his honour and looped in public squares for hours on end. The international community watched with trepidation. Within days, thousands had been arrested, including judges and bureaucrats accused of being members of the “Fethullah Gülen Terrorist Organization,” or FETO. Foreign journalists, including a Maclean’s reporter, were harassed and detained, while many of their local counterparts were thrown in jail.

MORE: The death of democracy in Turkey

On April 16 this year, Turkish citizens voted in a referendum on a package of constitutional amendments that would transform Turkey from a parliamentary democracy into a highly centralized presidency, securing Erdogan’s dominance. By then, Gülen supporters all over Turkey were on the run.

The AK Party had also turned up the heat internationally. After the coup attempt, Gülen supporters in Europe and elsewhere, including Canada, had been put under heavy scrutiny by Turkey’s intelligence services. Some European Union governments took exception to Turkey’s referendum campaigning in their cities, arguing that AK Party leaders were using language that sowed discord among Europe’s large Turkish diaspora, including calling a “No” vote a vote for the “terrorists.”

The international community, including a small team of election observers from the EU, warned that the referendum results not only violated the basic principles of fairness, but would also lead to a dismantling of Turkey’s democratic institutions. Erdogan, with his signature bravado, accused Europe of having a “crusader mentality.”

In reality, the coup attempt gave Erdogan the tools he needed to ensure a referendum win. It set in motion a more aggressive Turkish foreign policy and it ignited an AK Party push to extend its influence—and pursue its enemies—around the world, including in Canada.

The August gathering of Somalis at the Turkish consulate in Toronto—to discuss a coup attempt led by Turks in Turkey—seemed odd to some of those who were present. “It was strange,” Omar Hassan, chairman of the Somali-Canadian Business Council, told Maclean’s. “The Turkish delegation referred to the Gülenists as terrorists and everyone clapped. Hussen talked about the close relationship between Turkey and Somalia but never contradicted the ‘terrorist’ label.”

A spokesperson from Immigration, Refugees and Citizenship Canada, where Hussen has since been appointed minister, told Maclean’s the meeting was only one of many Hussen attended that day. “He arrived late from another meeting,” Bernie Derible said. “And he didn’t stay until the end. He said a few words and he left.”

Derible added that there was nothing out of the ordinary about Hussen’s visit to Turkey in July. It was a trip that Hussen, who was not in Cabinet at the time, paid for himself and made in a personal capacity. “The minister is one of those guys,” he said. “He meets with people. He talks to local elected people. But there was nothing they talked about in an official capacity.”

Hassan, who has close ties to Gülen-run organizations in Canada, says he was nonetheless disturbed by what he witnessed at the meeting. The Somali prime minister at the time of the coup attempt, Omar Abdirashid Ali Sharmarke, who is also a dual Canadian-Somali citizen, had sided with the Turkish government. Within days of the failed putsch, Gülen-run schools and a hospital in the capital of Mogadishu were seized and turned over to the Turkish embassy.

Years of AK Party financial support to Somalia had paid off, Hassan said. “And it felt to me like, at that meeting, Turkey was trying to pressure the Somali community into marginalizing the Gülen community in Canada. And Hussen did nothing to challenge that.”

The Turks, however, were facing a less amenable audience elsewhere. Judy Sgro, the MP for Humber River-Black Creek in Toronto, home to the Gülen-affiliated Nile Academy school, told Maclean’s in October last year that Turkey should stop harassing Canada’s Turkish diaspora and “focus on the people living in Turkey.”

“This is such a wonderful community,” she said of the Nile Academy’s staff, students, and parents. “I’ve been visiting them for years and I can’t say anything negative. Their values are Canadian values.”

Still, a senior diplomatic source in Canada told Maclean’s that Turkey has been using whatever leverage it can find to sideline its critics in Canada, including putting pressure on other diaspora communities, like Somalis, who have close ties to the Turkish state.

The diplomatic mission in Toronto, he added, speaking on condition of anonymity, has been monitoring senior Gülen members and reporting their activities back to Turkey, a charge the Germans have been levelling against the AK Party in their country for at least a year.

Unlike Germany, Canada does not have a significant Turkish population. But, despite their small numbers, Gülenists in Canada play an outsized role in the Turkish calculus, the senior diplomat said, because of the close proximity of the U.S.-based Fethullah Gülen, the reclusive cleric who heads the group. Turkish authorities worry that Canada may provide safe sanctuary for him in the event the Trump administration decides to extradite him back to Turkey.

So far, Canada has tried to stay out of Turkey’s intrigues, though it has accepted the asylum claim of one Turkish diplomat, the former vice-consul at the Turkish consulate in Toronto, Gökhan Toy, who is accused in Turkey of being a member of FETO.

“Canadian governments, both the Liberals and the Conservatives, do not want to rock the boat,” the senior diplomat said. “Turkey is a key NATO ally and essential to the fight against ISIS. Canada doesn’t have a lot of influence over the Turkish government to begin with, so why would it raise tensions? There is nothing to be gained.”

Others, however, warn that if Canada does not take a position soon, it could ﬁnd itself at the mercy of Erdogan’s authoritarianism. The spying allegations are particularly worrisome, according to one security expert in Istanbul, who also requested anonymity.

Under Erdogan, he explained, Turkish intelligence agencies have been given sweeping powers to conduct operations at home and abroad with little to no oversight. Under the new presidential system, control of the intelligence community will likely shift to the president, who has already demonstrated his penchant for using it against his perceived enemies, particularly in Europe.

“Canada should not be so confident that it has been spared,” the expert warned. “As Turkey loses its diplomatic legitimacy in western countries, it will rely more heavily on secret channels to pursue its interests. We’ve seen this process before, in Iran for example. When the revolutionary regime came to power, it did so without the support of most of the international community. So instead of dealing openly with the world, it went underground. It relied on its spy agencies to get the information it needed. Turkey is heading in the same direction.”