Jason Markusoff: Arithmetic triple lutzes have kept the 2026 bid alive and a reluctant city now waits until the Nov. 13 plebiscite day to have its say 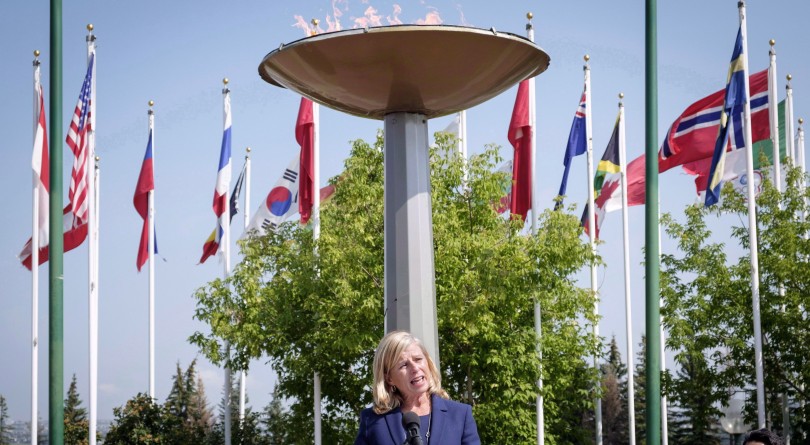 Just as Olympic games perennially showcase the unbelievable and sublime, every few years Olympic bidders produce their share of stupefying, jaw-dropping feats. The newest marvel—that Calgary council on Wednesday voted eight to seven to discontinue its bid for the 2026 Winter Olympics but it will nonetheless trudge forward—ranks fairly low in the annals of the gamesmanship that precedes any Olympics.

The executives behind the 2002 bid for Salt Lake City were indicted for bribing their way to a winning proposal; the head of Rio 2016 was arrested for a vote-buying scheme too. Russians initially projected Sochi 2014 would cost US$12 billion, not terribly more than the competition; they wound up with a $51-billion shebang.

In lower-level but nonetheless intriguing hijinks, the former aide to Calgary’s 1988 Olympic mayor once told me he had a fanciful sketching of pyramids east of the city’s downtown as a concept for an international media centre—it was never going to really happen, but boy did the foreign Olympic delegates gobble up the idea.

The Calgary 2026 bid corporation has shown no signs of malfeasance, grossly irresponsible numbers or imaginary pointy-topped buildings. But these civic leaders have proven adept and innovative in knowing how to shuffle around their messaging and the bid itself in order to placate just the right audience—a stingy federal government and a city council that wavers between rah-rah and nuh-uh this week. And now they must try to cajole a seemingly skeptical Calgary electorate, which votes Nov. 13 in a plebiscite to proceed or not with Calgary’s sequel Winter Games.

On Tuesday, 15 days before that referendum, there was no city-federal-provincial deal for the $3-billion Games’ capital budget, and council was set to end the mess. At 10 p.m. that night, high-ranking officials’ signatures appeared on a revised budget and a dizzyingly complex funding deal. On Wednesday, councillors took turns struggling valiantly to understand the figures and changes, but knew fully that their 8-7 vote to demolish Calgary 2026 would not do so—a two-thirds supermajority was necessary, and Mayor Naheed Nenshi was among the supporters who wanted Calgary to at least see through to the plebiscite.

The bid corporation tried various approaches to keep its project viable for a bit longer. It argues that the city taxpayers’ investment of $390 million yields the city more than $4.4 billion—or every dollar being spent on a Winter Games, as though all the money that compensates Belgian snowboard judges and overtime pay for visiting Saskatchewan police lands directly back in Calgary coffers. Board chairman Scott Hutcheson tried the how-dare-you approach to council, passionately warning them they’d “undermine the process” if it ended that day. And then, to counter common arguments that Calgary 2026 is a shameless play on nostalgia for 1988, the bid group ended its pitch to council with a three-minute video of ’88 hokum and more recent Olympic glory—a preview of what will be a heavy emotional appeal to the voting public. Adding to that bit of arm-twisting, former Olympians and other bid supporters and employees filled council chambers wearing red shirts saying “Calgary: it’s your decision.”

And here’s a highlight reel of the arithmetic flips and triple lutzes that Calgary BidCo performed to make all the numbers work, for the federal government to sign off as 50-per-cent contributors and not a dime more:

—Chopping off the to-build list 1,000 on-campus student housing units; but at least the planned affordable housing stays on the books, bid leaders reasoned.

—Slicing more than $150 million from the initial security budget of $610 million, which bid leaders say came after they applied scrutiny to the numbers the RCMP and other agencies compiled. History makes it abundantly hard to believe Calgary’s Olympics can reverse the trajectory of nearly every Olympics and major-events security costs; Vancouver Games’ costs ballooned from $175 million to $900 million. Securing Sochi cost more than $2 billion. And if with a few hard questions the bid group seriously managed to lop off one-quarter of the police and screening costs, every politician in Canada should take a long hard look at what police chiefs and RCMP superintendents have been asking for all this time.

—The City of Calgary declared it will spend $20 million on a $200-million insurance policy to cover any unanticipated cost overruns, as part of the $1.1-billion contingency budget already baked into the Olympic figures. One ironic hitch: city executives conceded they’re not sure if they can actually get that much insurance for the price they believe they can get, and would have to trim the Olympic budget further to prevent any additional overruns

—Scrapping plans to demolish an old inner-city bus barn by the river, the keystone site for a long-planned revitalization project

—There’s a sudden appearance of $150 million in money in the bid book for road improvements that were already planned and never tied to the bid. This was done simply to make it look like the city was putting up a bigger share of cash than it actually is, so that Ottawa can say it will put up its share to match what the municipality is. (Announcer: and the judges… seem to like it!!)

To the International Olympic Committee’s chagrin, this limping-along Calgary bid is actually the sturdiest one left in the mix. Organizers in Switzerland, Japan and Austria threw in the towel, as Oslo did in 2022, leaving that Games to go to not-very-wintery Beijing. Stockholm is on the shortlist, but its municipal government has pledged not to fund it at all; Italy’s leaders have pledged no federal money for its joint bid for Milan and Cortina d’Ampezzo. Should Calgary 2026 survive the plebiscite, it could well win hosting rights by default.

The Calgary bid group has always been looking for efficiencies in its Olympic budget, says Mary Moran, BidCo CEO, and second-from-the-top job at Calgary Economic Development, a person well-versed in lofty boasting about massive economic impact benefits. It’s only once the bid needed to be shaved down to make the numbers work for governments’ sign-off that Moran actually announced anything could be cut from the roughly $5-billion spending plan.

Therein lies the brutal paradox for an Olympics bid: one must keep a relatively tight budget so that politicians will sign on—$5 billion is still a puny number for the ever-expanding Olympics—but that limits the long-term benefits and projects a Winter Games can bestow upon a community. Calgary was going to refurbish old venues instead of building anew, and the slimmer budget bestows an even slimmer legacy.

Some councillors newly added their names to the list of Calgarians fed up with the brinkmanship and connect-the-moving-dots financial picture, while others still believe in the Olympic magic and potential uplift for an economically frustrated city. One optimist even suggested that Calgarians skip advance voting and wait until the Nov. 13 plebiscite day, in case more details emerge or shift before then.

Public open houses ahead of the vote have largely been packed with financially reluctant or simply firmly unwilling residents—the latest batch of numbers probably won’t impress them much. But maybe BidCo can just play that movie of Gaetan Boucher, Liz Manley and Sidney Crosby on repeat, because wouldn’t it all be so cool?