Pyeongchang 2018: Patrick Chan proves he can deliver under pressure

Could you have scripted it any better? 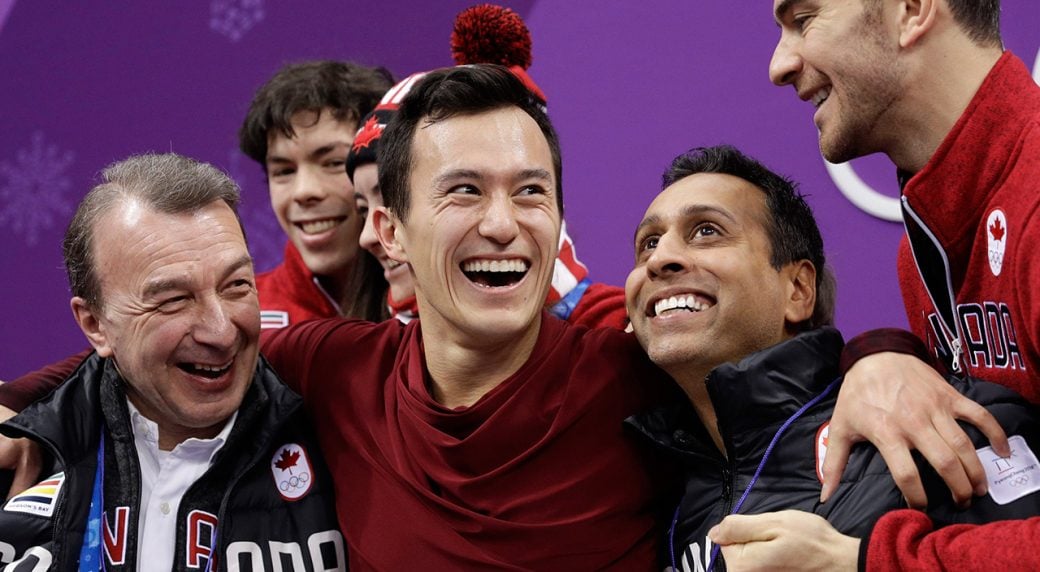 GANGNEUNG, South Korea — Patrick Chan was in the dining hall of the athlete’s village one day before he won the medal he thought he’d win four years earlier, but didn’t, and that’s when his teammate and long-time friend, Eric Radford, told Chan something he felt his buddy needed to hear.

“Patrick,” Radford said, “you don’t owe anybody anything.”

No, the figure skater who is one of the best ever, a three-time world champion and owner of two Olympic silver medals—and now, that elusive gold—sure didn’t.

But Radford delivered the message because he knew Chan was probably feeling a lot of pressure. The way Radford saw it, if Canada was going to win gold in team figure skating, the men’s free skate on Day 3 was the most important event ahead.

MORE: Photo essay: Behind the scenes with Patrick Chan in 2014

Could you have scripted it any better? Four years after he suffered the most disappointing defeat of his career on an Olympic stage, Chan, skating to Hallelujah, helped Canada win its first gold and became the first Canadian male singles skater to win Olympic gold, period. It’s basically poetry.

Chan got off to a great start in his long program, nailing his opening quadruple-toe loop, triple toe loop combination, and then another quadruple toe loop after that. He fell on a triple axel, put a hand down on a second, but still pulled together a season-high score.

When it was over, Chan sat in that kiss and cry area with his teammates and he clutched a white polar bear that somebody had thrown on the ice. Chan smiled and made that bear dance a little. Then he damn near exploded—and pulled his coach into a headlock—when he saw his score, which blew his season’s best clear out of the water. “This,” said Ravia Walia, long after he’d come free of that headlock, “was the Olympic moment Patrick has been waiting for.”

It was. It is. And Chan had a feeling it might be. Once he found out Virtue and Moir were coming out of retirement for one last crack at the Olympics, this Canadian team got together and decided they were going to win that team gold in South Korea.

It looked really good through two days of competition, Canada having built up a six-point lead. But it wasn’t until Chan delivered that, as Radford says, “It really hit me for the first time.” The gold medal was Canada’s.

For Virtue and Moir, it’s historic, because they’re now tied for the title as the most decorated figure skaters in Olympic history, with four medals (two gold, two silver). Barring complete catastrophe, that title will be theirs outright after the ice dance competition. But as they made their way through the barrage of media, that’s not what Virtue wanted to discuss. He wasn’t even asked about Chan, but he offered this up, anyway: “Patrick, I think, proved something to himself today.”

Chan did. He proved that he can deliver on this stage when the pressure’s on. As the three-time and reigning world champion who was expected to win in Sochi four years ago, that pressure of being the favourite got to him, and he settled for silver. It’s not that he didn’t feel it this time around—“let me tell you, it was nerve-wracking,” Chan said, of that free skate—but he proved he can thrive under that pressure at the Olympics.

And don’t try to tell Chan that this team gold means anything less than an individual medal.

WATCH: In conversation with Patrick Chan

“We are a very tight knit group, here in Canada, us figure skaters, and to me that means more than winning a medal individually. We can now embrace each other and know that we collectively did something amazing.”

Canada’s figure skaters really did. From the end of the first day through to the end of the last, this team led. Virtue and Moir didn’t even need to step on the ice for the last skate of the competition, because the win was already locked up after Daleman nailed her long program to officially clinch gold.

Virtue and Moir won the free skate, anyway, to give Canada another 10 points, and then the team got together in that purple booth and they group-hugged and jumped and yelled.

“We’ve been dying to do this together,” Chan said. “And to step on that podium with all of us together, having grown up as junior skaters all the way up— no other country has ever had that.”

While Osmond and Daleman represent the future (Osmond skated the short program in the team event, and Daleman skated the free), Chan and Radford and Duhamel and Moir and Virtue are all of the same generation, and they’re all retiring after this competition.

“Gosh, we’ve experienced so much together,” Chan said. “I’m talking outside of figure skating and outside of the Olympics. We’ve lived our lives together for so many years. I’ve grown up, they’ve taught me so much as a person and they’ve kind of nurtured me as a child, and look at where we are now. It’s quite a beautiful thing.”

It was a team effort, certainly, to help Chan win that Olympic gold. But on Day 3, the moment was all his on that Olympic ice. And if you ask his coach, Walia, “I think there’s a couple more great Olympic moments to come.”

At the flower ceremony at the arena, Chan jumped onto that top step of the podium with his teammates, where he received a plush tiger wearing a hat (the medal comes later). He looked up at his mom and his dad and his girlfriend, who were in the crowd, who all saw his greatest Olympic moment.

“It’s hard to describe,” he said, grinning, of that feeling he felt while standing on the top step of an Olympic podium.

“Aah,” Chan sighed, still smiling. “It’s like a huge weight off your shoulders.”