Tabatha Southey: Marilyn Gladu seems to think this medicine could easily get the Canadian economy back on its feet again. How to get through to her? Through poetry, of course. 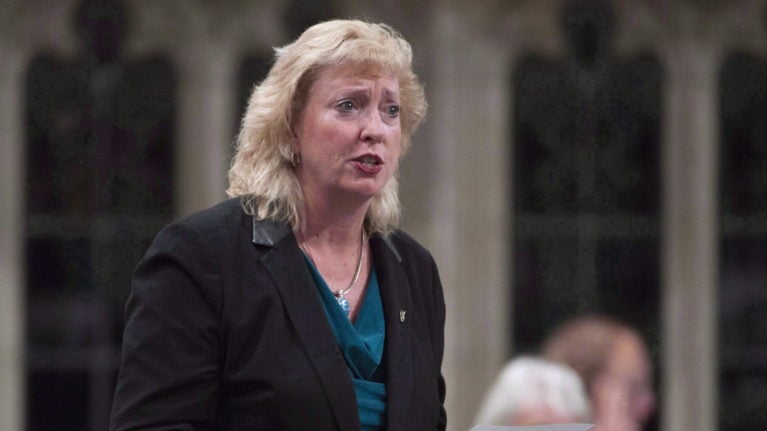 Conservative MP Marilyn Gladu in the House of Commons in Ottawa on May 6, 2016. The Conservative health critic says the Liberal government needs to do more to ensure that cannabis products available online are not attractive to young people. (Adrian Wyld/CP)

Last week, Sarnia-Lambton MP, former Conservative health critic and current candidate for leader of the Conservative Party, Marilyn Gladu, took time off from hoping to one day lead the country to promote the drug hydroxychloroquine as a miracle cure for the deadly illness that currently has much of the world on lockdown.

Ms. Gladu’s argument seems to be that this medicine, when taken with a disregard for human life, or at least the facts, could easily get the Canadian economy back on its feet again.

Hydroxychloroquine (which is used to treat rheumatoid arthritis, malaria and lupus) has not been found to be an effective treatment for COVID-19. Many were therefore surprised (and by that I mean appalled and alarmed) when, on Wednesday, Gladu told Blackburn News that, “In the United States they’ve been successful with the treatment of hydroxychloroquine, azithromycin and zinc sulfate. They’ve tried this on thousands of COVID patients, with nearly 100 per-cent recovery rate, and so the FDA has approved this as an emergency measure, but Canada has not.”

It would appear that Gladu is getting her medical information from failed frozen steak salesman Donald Trump, who has been flogging hydroxychloroquine as if he has a financial interest in it, which indeed he might. Everything suggests the hydroxychloroquine bee was put in Trump’s bonnet by Fox News’s Tucker Carlson. That’s where the “100-per-cent cure rate against coronavirus” claim Gladu is now repeating was first floated. Buoyed as it’s been by anti-vaxxer conspiracy theorists, QAnon devotees and now by the MP for Sarnia-Lambton, it’s been difficult to shoot down, despite the fact that everything so far indicates it is a lead balloon.

The president of the United States has been indulging in a lot of medical magical thinking around COVID-19. He has variously insisted that it’s not a real threat, that it was a threat that wasn’t coming to America, that it had already been sent packing from America, that he was never told it was coming, or how terrible it is, that he countered the grave threat well before anyone else was bothered by it, and that it can be easily cured anyway, with hydroxychloroquine.

Adopting Trump’s attitude toward drug approval would certainly simplify drug trials and marketing. No more research and development. No more rigorous testing leading to that singsong list of possible side effects. You know, the one that begins, “Ask your doctor about…”

In this Trump-inspired vision of Canadian medicine, rigorous approval processes following long and expensive research and development will be replaced with a quick TV spot informing Canadians, “I found this weird mould on the bottom of my shower curtain. What do you have to lose? Take it.”

There does not seem to be a lot of daylight between Gladu’s ideas on the crisis and how to solve it and Trump’s ideas. “Every [COVID-19] death is tragic,” Gladu said. “But, the reality is more people are dying of suicide, more people are dying from cancer and smoking and we don’t shut the economy down for that.”

Oh, dear, Marilyn. You said that out loud. I do like to think that if shutting down the economy for a spell would cure cancer, and also prevent suicide, we would do that. Neither of these sad and terrible things, however, are communicable diseases. They are not deadly viruses which all the best medical authorities are telling us can only, at this point in medical history, be arrested by staying the hell apart as much as is humanly possible and by washing our hands.

“So, where we see that there’s a remedy available and we see that for most of the population this is not a concern, people are losing their businesses in Sarnia-Lambton, they’re losing their livelihoods and there’s no end in sight,” Gladu complained.

While “there’s a remedy available” is concerning enough, what should chill you is “for most of the population.” This is simply not based on fact. Any suggestion that the solution here is to just quarantine the elderly and those with underlying conditions betrays ignorance about the virus, about who gets ill and how ill they may get. We also don’t know yet what the long-term effects of COVID-19 will be for survivors or if it will come back, but mostly we are a multi-generational society. There is no way to send the elderly to some kind of summer camp to do crafts alone while the rest of us work and go out for cocktails again. Let’s not pretend there is.

Gladu later Twitter-bristled that her remarks had been “taken out of context and do not accurately represent the full plan needed.” When reached for comment this week, her office copied and pasted her tweet.

How do we reach her? We need every Canadian in this fight. Well, Gladu did once read a poem in the House of Commons about the perils of legalizing marijuana, so I’m going to try this:

What the Blazes, Gladu?

You said hydroxychloroquine
Cures COVID-19.
Like Yanks all get well
But our gov is just mean.
There is so much wrong there that without being didactic
I suggest you stop talking and instead read this fact-check.

There’ll be days again for pot shots and innuendo,
For the throwing of stones from every glass window.
But maybe right now we should be less calculated,
We could care for every soul,
(Pretend they’re incorporated).
It seems right to me
But what do I know?
All I can say is
What the blazes, Gladu?