A race suddenly breaks out for the Conservative leadership

Stephen Maher: Jason Kenney's endorsement of Erin O'Toole is unusual, but could also deliver a powerful boost to a campaign already on the upswing 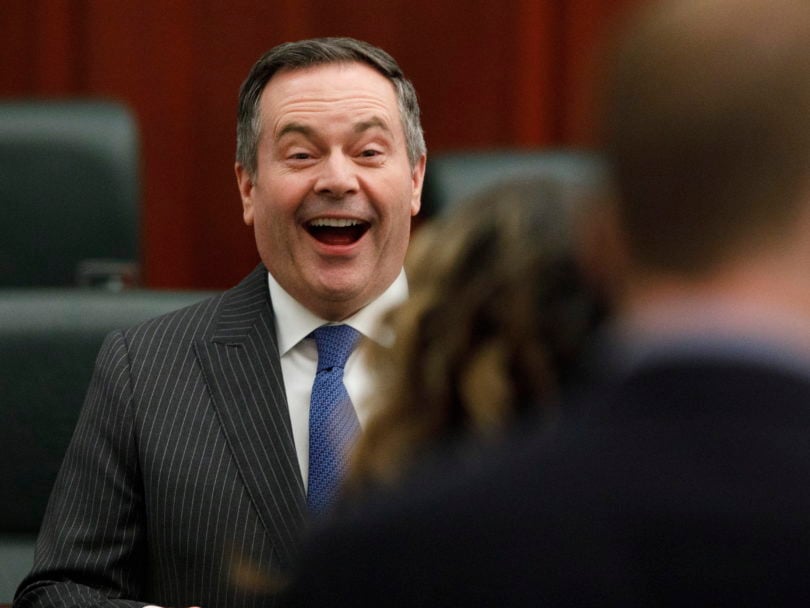 Kenney has a laugh after the Speech from the Throne in Edmonton on Feb. 25, 2020 (CP/Jason Franson)

On the way to Peter MacKay’s coronation, a race broke out.

Jason Kenney’s endorsement of Erin O’Toole on Thursday is significant, because it should pierce the sense that the leadership of the Conservative Party of Canada is sure to fall into the MacKay’s lap when Tories gather in Toronto in June.

MacKay still looks like the likeliest winner, but there is more racetrack ahead of MacKay than behind him, and O’Toole looks to be gaining on him.

Kenney’s endorsement sends a signal, in part because it is so unusual. Premiers normally sit out federal leadership races for the very good reason that they will have to work with whomever wins. Kenney, who is said not to have warm feelings for MacKay, has repeatedly made it clear that he would not like the Nova Scotian to run the party.

He earlier called for Rona Ambrose and John Baird to enter the race, so O’Toole shouldn’t feel too special, since Kenney only decided to endorse him after those two made it clear they would not enter.

I don’t know why Kenney is so against MacKay. It might be because of shared experiences in cabinet, or it might be because of old fault lines that are always just below the surface in their party. MacKay comes from the Brian Mulroney camp. Kenney is a former Reformer, the party founded by people who despised Mulroney.

Whatever the reason for the enmity, Kenney does not go out of his way to disguise it.

In his email to party members announcing his endorsement, he doesn’t mention MacKay by name, but references MacKay’s post-election comment blaming the party’s poor showing on Scheer’s social conservatism.  “No one will have their deeply-held beliefs dismissed as ‘stinking albatrosses’ under Erin O’Toole’s leadership,” Kenney writes.

He also takes aim at MacKay’s poor French: “It is also essential that our leader be able to communicate in both of Canada’s languages. Erin can promote conservative values and policies in French in Quebec, and across Canada.”

Kenney’s endorsement is significant because he has been such a tireless organizer in the federal party, collecting IOUs that he can now cash in.

In the days before the last election, Elections Canada records show, his riding association transferred more than $300,000 to more than 70 candidates across the country. He has signed up members, delivered speeches and collected cheques in church halls across Canada for a long time. If he puts his muscles into this endorsement, he ought to be able to deliver significant numbers of members to O’Toole.

And O’Toole has been running a more substantive, error-free campaign than MacKay. His key organizers—Fred Delorey, Melanie Paradis and Dan Mader—worked for O’Toole in the last leadership, which may explain why they have avoided some of the early difficulties that MacKay experienced in this race as he put his team together.

With small-c conservatives across the country fuming about the rail blockades, MacKay responded by tweeting support for Albertans who dismantled a blockade, then deleted the tweet when it was pointed out that he seemed to be encouraging vigilantism.

O’Toole, on the other hand, came out with a real policy proposal: new legislation that would make it extra illegal to block “critical infrastructure.” Personally, I don’t think we should have legislation like O’Toole is proposing, but he is making a forthright, practical policy proposal, which is what leadership candidates ought to do.

MacKay, in contrast, said in Alberta this week that he thinks Canada should stop importing foreign oil, which is the kind of dumb idea that sounds good until you think about our trade agreements for 30 seconds.

If O’Toole keeps making solid arguments, and MacKay keeps saying things that sound good until you think about them, O’Toole ought to do well in the debates ahead.

And O’Toole has also positioned himself as the backup candidate for social conservatives who will be looking for the most acceptable candidate to endorse when their champions drop off the ballot, which is how the party ended up with Scheer as its leader.

I think MacKay’s positions—a touch closer to the centre than O’Toole’s—would be better for the party in a general election where swing voters in Ontario will again cast the deciding ballots, but MacKay is not now in a general election. He is in a leadership race, and the membership of the Conservative Party of Canada is extremely conservative.

Recall that in the last leadership race, Conservatives opted for Scheer and Maxime Bernier over O’Toole, who was positioned to their left.

This time, O’Toole is running from the right, and he can count on Kenney reminding the membership of that until it’s time to vote.