Animal and climate activists are merging—and for good reason

Opinion: Mounting concern for both the treatment of animals on Canadian farms and the environmental harms caused by animal agriculture is fuelling an increase in activism 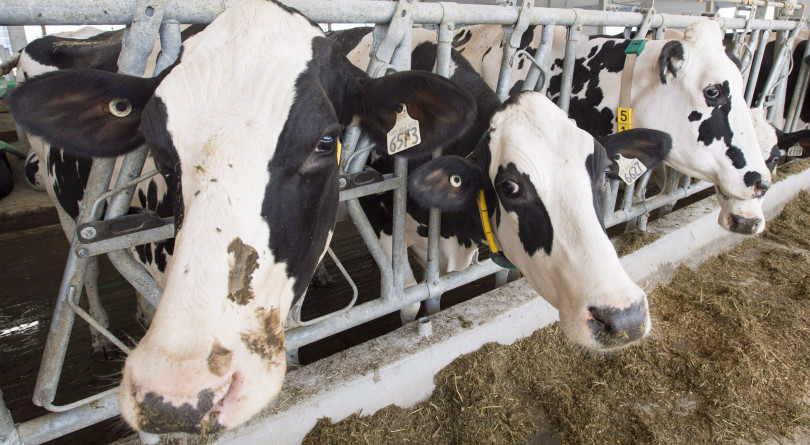 Dairy cows are seen at a farm Friday, August 31, 2018 in Sainte-Marie-Madelaine Quebec. THE CANADIAN PRESS/Ryan Remiorz

Jessica Scott-Reid is a Canadian writer, animal advocate and plant-based food expert. Her work appears regularly in media across Canada and the U.S.

On a cold weekend this past March, animal rights activists showed up unannounced at a dairy farm in southern Ontario, live-streaming their self-guided tour of the cows’ and calves’ living quarters. “I was shocked at the number of hutches outside, each one housing a calf just days or weeks old,” says Johanna Nikoletos, an activist with Canadian group Liberation T.O. and international group Direct Action Everywhere. “Rows upon rows, hundreds of hutches, filthy and stained with manure on the inside.”

The imagery is powerful, and offers a glimpse into the magnitude of the impact animal farming has on the environment, including the vast space it occupies and the pollutants it creates. A single dairy cow in Canada, for example, can produce up to 400 grams of methane a day. This equals out to about the same emissions as a mid-sized vehicle driven 20,000 kilometres. We farm over a million dairy cows a year in Canada, and slaughter over 800 million land animals.

Mounting concern for both the treatment of animals on Canadian farms and the environmental harms caused by animal agriculture is fuelling an increase in activism and inspiring a merger of movements. Animal rights and climate activists are increasingly becoming one and the same.

READ: Why everybody should rid themselves of old habits—and go vegan

Last year, global animal rights group the Save Movement created a new branch—the Climate Save Movement. “There was a recognition that the animal rights movement needs to work with environmental groups in a movement of movements,” says Toronto activist Anita Krajnc. “Roger Hallam, the co-founder of Extinction Rebellion, says ‘If we don’t work together, we are going to die together.’” Extinction Rebellion, a prolific U.K.-based environmental group, has since birthed Animal Rebellion, with chapters across Canada. In Kelowna, B.C. last month, a Rib Fest event was protested not by the usual animal rights activists, but rather vegan climate activists.

Activist groups around the world, both animal- and climate-concerned, are now engaging together in various acts of civil disobedience, including blocking off major city intersections, holding die-ins outside homes of prominent political and business figures, interrupting retailers and food producers and trespassing on farms.

Alex Cuc was part of Liberation Lockdown, a group that entered and livestreamed from an Alberta turkey farm earlier this month. She says the experience showed her first-hand how devastating farming in Canada is for both animals and the environment. “The air was filled with particles,” she describes. “Even through our N94-rated face masks [meant to remove 94 per cent of particles in the air] we were still coughing.” She claims the barns are not cleaned out for the duration of the birds’ lives—four months. “We were sitting on one to two feet of compacted litter, feces and roaches. There were decaying bird bodies as well.”

Animal waste is a prominent problem noted by activists. The most recent stat on farmed animal-waste production in Canada is from 2006, when about 200 million tonnes of livestock waste was being produced per annum; an amount far beyond that which the land can absorb. As animal farming has only increased, we can assume there is now more waste being produced, transported, stored, spread and leaked into our waterways than ever before. According to the National Collaborating Centre for Environmental Health: “Manure storage and land application tends to produce odour, greenhouse gases, microbes, and particulate matter, which can negatively impact the environment and human health.”

Greenhouse gas emissions are typically the topic of greatest worry in discussions about animal farming and climate breakdown. Globally, animal agriculture contributes at least 14.5 per cent—and up to, some experts believe, a staggering 51 per cent—of total GHG emissions. In Canada, animal agriculture is considered a relatively low contributor to national GHG measurements. However, the current 3.7 per cent figure is believed by some experts to be misleading, due to the exclusion of meat and dairy products imported from countries such as the U.S. and China, where contributions are much higher.

According to the World Animal Protection (formerly WSPA), industrialized farms in Canada and the feed crops they are dependent upon also threaten national biodiversity, “having reduced our Tallgrass Prairie and Carolinian Forest ecosystems to miniscule patches and destroyed the habitat for several species of wildlife,” adding that “roughly half of Canada’s ‘species at risk’ are found on agricultural lands.”

Land use is another concern for activists. On a global scale, at least 83 per cent of farmable land, or 45 per cent of the world’s entire non-ice surface, is currently used to raise and feed livestock (even with about 90 per cent of the world’s farmed animals primarily confined to factory farms). And even while taking up so much space, a landmark study published in the journal Science last year found that global animal farming produces only 18 per cent of our food calories and 37 per cent of our protein. Alternatively, without meat and dairy production, researchers found that farmland use could be reduced by more than 75 per cent—an area equivalent to China, the U.S., The EU, and Australia combined—and everyone could still be fed.

This mounting information regarding the role that animal agriculture plays in climate breakdown has been the instigator of increased acts of non-violent, though often illegal, civil disobedience by climate and animal activists in Canada, the U.S., U.K., EU and Australia. And as a result, the agriculture community has been fighting back. In Canada, farmers have recently called for better legal protection against activists, and animal agricultural lobbyists have sent out newsletters and published trade articles about the dangers of activists and how to prepare for their sudden arrival on farms.

But as scientists continue to warn of impending climate chaos caused in great part by animal agriculture, and as animal and climate activists join forces, growing greater in number and nerve, perhaps rather than focusing on activists, animal farmers should instead focus on fixing the problem. Mitigate environmental and cruelty concerns, transition to regenerative and ethical plant crops, and be more transparent with the public.

If animal farmers don’t want activists showing up to their operations, and if slaughterhouse owners don’t appreciate activists laying on their front laws, then perhaps they should stop giving them such reason to.

No one is trespassing on Saskatchewan chickpea farms, now are they?

Maclean’s is one of more than 250 media outlets participating in Covering Climate Now, an international journalism initiative co-founded by The Nation and Columbia Journalism Review. We will be publishing and sharing original coverage all through the coming week in the lead-up to the UN’s Climate Action Summit, to be held in New York on September 23. The summit is an attempt to spur world leaders to develop new plans to reduce carbon emissions by 45 per cent over the next decade and reach a target of zero net emissions by 2050.
FILED UNDER: animal rights climate change covering climate now Editor's Picks