Are you Liberals or are you Trudeau's men and women?

Andrew MacDougall: If backbench Liberals are operating on blind faith in the PM about the SNC-Lavalin scandal, they are running out of time to pull their heads from the sand 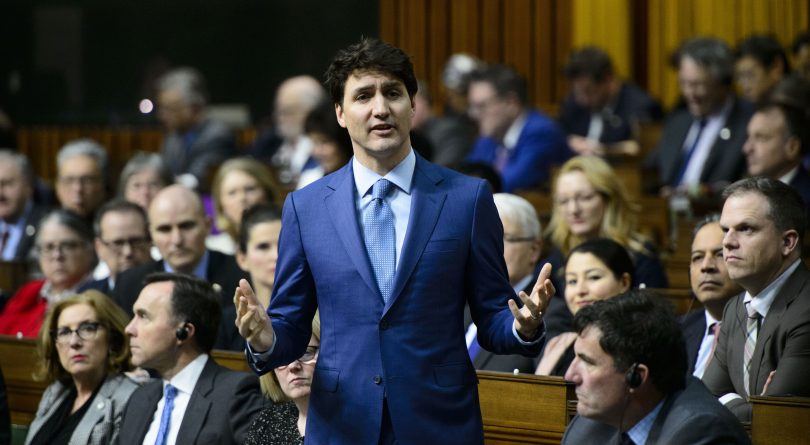 Trudeau stands during question period in the House of Commons on Monday, Feb. 25, 2019. (THE CANADIAN PRESS/Sean Kilpatrick)

When a leader increases their party’s seat count from 36 to 184, as Justin Trudeau did in his majority-winning 2015 election campaign, he’s entitled to some good will. The question now staring Trudeau’s Liberals in the face is: how much?

It’s a question at least some of the herd must be asking after their colleagues on the Ethics Committee shut down yet another potential line of enquiry into the SNC-Lavalin scandal. Or, if not that, the question is being asked in light of the government’s cack-handed (and pathetic) attempt to smear Jody Wilson-Raybould using the Chief Justice of Manitoba as a canvas, a move that finally got the legal community off its arse on the mega-issue dominating the political agenda.

Heaping smear on top of political interference in the criminal justice system isn’t what any Liberal ran on in 2015, and it’s something no Liberal should want to run on later this year. So why are most Liberal MPs still fronting Trudeau’s nonsense?

Come to think of it, do most Liberal MPs even know what happened? Have any of them pressed Team Trudeau for the truth, the whole truth and nothing but the truth? Does the backbench know what Wilson-Raybould and Jane Philpott (and presumably Cabinet) knows, or are they operating on blind faith?

If it’s the latter I would recommend they take their head out of the sand forthwith, because it’s their asses that are on the line. If Trudeau is caught up in something awful—an impression he grants every time he muzzles a person or an investigative body—they are going to wear it too.

READ MORE: On the elimination of inconvenient Liberals

At root, it’s a question of what our politics is meant to be. Solidarity come hell or (possibly criminal) high water, or a declaration of principles that are to be adhered to even if the King decides they are no longer convenient? All that’s certain is that Liberals of good faith are running out of time to keep the taint from the party brand that, believe it or not, should extend beyond their leader.

Every once in a while, anyway, there is a glimpse of steel. Wilson-Raybould and Philpott have clearly made their stand, and MPs like Nathaniel Erskine-Smith and Wayne Long have encouraged the Prime Minister to allow their colleagues to speak freely. Sadly, they are the exception that proves the rule of caucus solidarity. For every independent mind there is a ‘good soldier’ like Judy Sgro around to tell them to get back in line.

Now, someone like me would delight in all of this, wouldn’t I? But I speak from experience. I’ve put my cack hands to use in the service of scandal, too.

I will bet you the vast majority of Conservative backbench MPs in the last Parliament would rather we had vomited out the Mike Duffy business all at once so they could make their judgments about its propriety in 2013 rather than come election time, when it was before the courts. Sometimes the attempt at a political cover up becomes the crime (as it was with Duffy—with the caucus never losing faith in Harper as their leader), but other times the cover up is there to blanket an actual crime. It would be good for Liberals to know with which they’re dealing. At least you’d think. But politics is a funny business and partisanship is a hell of a drug.

Given that Wilson-Raybould herself has said the approaches made to her over the back end of last year on SNC weren’t—in her view—illegal, one suspects the unrevealed bits of the SNC saga speak more to Trudeau’s character, and not the legality of his actions, or the actions of those in his employ. Given the Liberals are so reliant on Trudeau as the figurehead and his image as their brand, it would explain why Trudeau’s office would fight tooth and nail to keep any contrary evidence out of public view. We’ve had a glimpse of angry Trudeau before, including the recent bust-up with Celina Caesar-Chavannes, and it hasn’t always been pretty.

Either way, the truth will out.

In case the Prime Minister hasn’t figured this out yet, the two former ministers arrayed against him are both smarter and more determined than he is. Given their un-shifting story, they also appear to be on firmer ground. They think Trudeau’s pulled some funny business and they aren’t going to rest until all of the dirty laundry is aired in public. And if the PMO tries to smear them, they will punch right back, and land the heavier blow.

And you know who will be cheering that on? Team Orange and Team Blue, that’s who. Forget that people aren’t really warming to Andrew Scheer; if Trudeau has done something very ugly it won’t take a political genius to beat him. Remember Doug Ford?

If I were a Liberal MP who was still in the dark over the truth I would be asking for some light. Stat. The Liberals not named Trudeau need to ask themselves what they’re in Ottawa to try to accomplish. Are they in it for their platform and their party, or are they in it for the (potentially dis)honourable Member from Papineau?

In other words, are they Liberals, or are they a Trudeau’s men and women?