Black and Asian solidarity against racism is powerful. But it is not the solution.

Alicia Lue: 'Reliving and assuming each other’s traumas will not dismantle white supremacy. The onus falls squarely at the feet of our shared oppressors.' 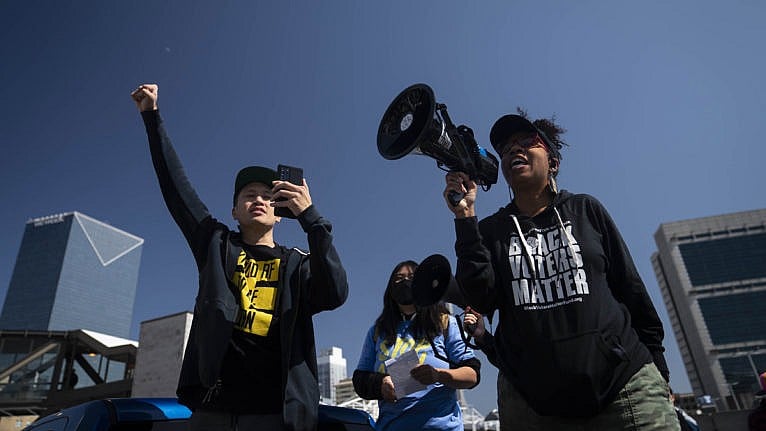 Activist William Lex Ham, left, and Wanda Mosley, Senior Coordinator in Georgia at Black Voters Matter, speak at a Stop AAPI Hate Rally in Atlanta, Georgia, U.S., on Saturday, March 20, 2021. Stop AAPI Hate, a group that tracks anti-Asian violence, said it had received nearly 3,800 reports of hate incidents since mid March, 2020, around the time that the Covid-19 pandemic seized the U.S. More than 500 of those came in the first two months of 2021. (Nicole Craine/Bloomberg/Getty Images)

I’ve written a lot about race. The present-day repercussions of slavery and colonialism; the machinations of racism; the impossible burden of being Black. I am intimately aware of the injustice and inequity that are systemically, and systematically, doled out to people who look like me, people who share my ancestry. But the alarming spike in anti-Asian racism in Canada and the United States over the past year has caused me to reflect on my ancestry in its entirety. I am one-quarter Chinese. Twenty-nine percent to be exact, as confirmed by the recent results of a popular DNA testing service.

My paternal grandfather immigrated to Jamaica from Hong Kong in the early 1940s. There, he met and married my grandmother. Their union produced three children, including my father. My grandfather died in 1973, 14 years before I was born. My knowledge of him sums up the full extent of my connection to my Asian heritage, a detail that I do not speak about much and one that is not extraordinarily obvious except for the common perception that I look racially ambiguous, and the fact that my last name is the 47th most common in China.

RELATED: The tenderness and tenacity of Black motherhood

I have an inherent feeling of belonging when I am amongst other Black people, whether in Jamaica, or Saint Lucia or Haiti. There is comfort in our shared history, even the horrific parts. On the other hand, I’ve never felt more out of place than I did walking down the streets of Shanghai, or than when I lived in Southeast Asia. I wasn’t just a foreigner. I was a Black foreigner, an unconcealable fact that would elicit stares and, quite frankly, anti-Black micro-aggressions. One lady in Shanghai asked me if I was proud that my then-four-month-old son was “fairer” than me. A classmate at my then-six-year old’s international school asked me one day why I had such dark skin. The most simplified response I could think of to tell him was that people in different parts of the world had different shades of skin. He wistfully responded that he wanted to be as white as a sedan in the school parking lot. He then proceeded to tell me all the precautions his mother had taught him—such as staying out of the sun—to ensure that he did not get darker, precautions my own Black grandmother had taught me growing up in Jamaica.

The market lady in Shanghai; my son’s classmate; me. All three of us had inherited the dregs of colonialism.

In the aftermath of the anti-Asian hate attack in Atlanta in late March that left eight dead, six of whom were Asian women, a social media firestorm was set alight condemning the attack and calling for solidarity with the Asian Americans and Pacific Islanders (AAPI) community. But calls for solidarity were met with scrutiny by many who felt that the AAPI community has historically distanced themselves from the Black community.

RELATED: Chinese Canadians share their experiences of racism during COVID-19

One Black critic wrote that “the Asian community has never liked us or gone to bat for us. So until they do better, they are a part of the problem.”

The criticism yielded responses such as: “I feel like I’m being held responsible for the actions of the old racist Asian Americans working in certain Black communities.”

It became quickly evident that there was a clear line drawn between the Black and Asian communities, the latter still raw from a tumultuous year of anti-Black police brutality and weary from bearing the brunt of systemic racism.

The media was quick to equate one community’s experience with the other’s, and touted allyship as a would-be Band-Aid for the onerous effects of systemic racism.  Sharing the load does not work when the “load” is over 400 years worth of compounded trauma. Once again, in the wake of violent white supremacy, the seemingly obvious response of condemning said white supremacy was abandoned in favour of the expectation that the traumatized group would pull themselves up by their bootstraps. Only this time, one traumatized group was expected to share the burden of another traumatized group.

RELATED: Desmond Cole: ‘Canada insists on being surprised by its own racism’

As I listened to Asian-American journalist Lisa Ling discuss the different limitations, and subsequent trajectories, historically imposed by racism on Black and Asian Americans, the similarities of the Black and Asian experiences in the U.S., and the “longstanding tensions” between both communities with James Woodall, president of the Georgia NAACP, what became abundantly clear was what I already knew. That the allyship that was needed would not, should not, be built on shared trauma. Reliving and assuming each other’s traumas will not dismantle white supremacy and end systemic racism. The onus falls squarely at the feet of our shared oppressors.

While both AAPI and Black communities have inherited similar traumas, we cannot be expected to carry each other’s burdens. Black people wanting white supremacy to be held accountable for Asian hate should not be misconstrued as apathy toward Asian racism, or vice versa. We must, however, collectively call for the weeding of the white supremacist roots that continues to give rise to fresh trauma. There is no doubt that allyship and solidarity in the face of white supremacy is a powerful force. But it cannot be the solution.

The construct of race was created to divide and conquer. Ultimately, a Black-Asian divide will only fuel the raging fires created by white supremacy. Which is why only the dismantling of white supremacy can be the answer to ending systemic racism. And to ending the continued infliction of trauma to both sides of my ancestry.