Canada must aim at stamping out COVID-19 spread: An open letter from doctors and scientists

Adopting a strategy of maximum infection suppression early in this epidemic—such as was seen in Australia, Taiwan and the Atlantic bubble—might have saved 21,000 Canadian lives 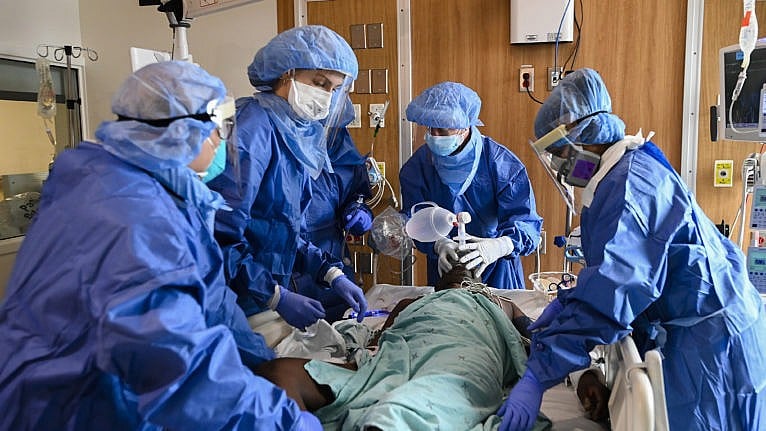 A 60-year-old COVID-19 patient fights for his life, desperately gasping for air as health-care staff provide life saving medical care in an emergency situation in the intensive care unit at the Humber River Hospital during the COVID-19 pandemic in Toronto on Tuesday, April 13, 2021. The patient was intubated and put on a ventilator successfully. (Nathan Denette/CP)

The authors of this commentary/opinion article are physicians and scientists with backgrounds in infectious diseases, critical care medicine and other health disciplines (details at bottom). Among them are internationally recognized university professors, clinician-researchers, former and current medical school department/sectional chairs, ex-senior government officials and public health experts including modellers.

Canada is in the middle of a third COVID-19 surge, one that is substantially more severe in many provinces than either of the first two surges. In the near future, some provinces will almost certainly exceed their health resource capacity and be forced to triage critically ill patients due to limitations of ICU beds and nursing staff.

It did not have to be this way. A maximum infection suppression strategy implemented early in the epidemic to reduce COVID cases to as low a level as possible, and then stamp out outbreaks as they arise, would have saved tens of thousands of Canadian lives. This approach, with some modifications, remains the best strategy right now.

For more than a year, infectious disease and acute care physicians, scientists and independent public health experts across the country have begged for decisive action to reduce and maintain case counts as low as possible, but have mostly been ignored by political leadership.

In the aftermath of this unfolding tragedy, no doubt there will be post-mortems (an apt term indeed). Politically driven deficiencies in strategic management planning will be discounted with the phrase “Who could have known?” or “We followed the best advice.” But this would be far from the truth. The simple fact is that many experts warned of poor outcomes given the half measures proposed by most provinces. Of course, those in power will also point to the fact that Canada is in the middle range of national outcomes; some other countries performed even more poorly.

Is that enough? Is that what our country should strive for? Is excellence no longer an option?

The undeclared strategy adopted by most Canadian provinces (as well as the United States, the United Kingdom and much of Europe) is focused on protecting health system capacity, in particular, ICU capacity. The concept is to use public health restrictions to control disease activity below levels that which would overload the system (resulting in a sharp inflection in the number of deaths), while ostensibly minimizing economic disruption. Unfortunately, both theory and practice have shown that this kind of fine-tuning of a highly contagious infection is extremely difficult, when doubling time of infections is as low as 10 days. In addition, deaths with this approach are much higher than should be tolerated.

Unfortunately, theory and experience demonstrate that an approach focused on protecting health system capacity leads to repeated provincial-level shutdowns associated with severe economic disruption and business uncertainty. The failure to suppress community transmission leads to an extremely high outlay of health care resources, exceptional stress on health care workers, and the temptation, when the strategy fails, towards draconian restrictions of civil liberties, as recently attempted in Ontario.

There is a better way that has been proposed but has sadly been ignored by most Canadian provinces and most countries. That is a maximum COVID-19 infection suppression strategy with the goal of reducing infections to very low levels, and halting new outbreaks with aggressive contact tracing and local measures. While it is not feasible at this stage in Canada to reduce case counts to zero (i.e. a true COVID Zero approach), aggressive suppression efforts to eliminate untraceable community transmission to the point that local measures can be effective is a viable strategy even now.

This approach, used by Japan, Taiwan, South Korea, China, Australia, New Zealand and the Atlantic provinces, is best initiated when case counts are low enough to allow effective contact tracing as well as local measures to control small outbreaks. However, we can initiate this strategy right now by starting with an intense circuit-breaker shutdown until case counts fall sufficiently to allow individual contact tracing, testing and isolation. Occasional limited local shutdowns, together with more rapid rollout of COVID-19 immunizations, can be utilized to control the epidemic.

Vaccination, without a doubt, is the long term solution to the devastation SARS-CoV2 is inflicting on Canadian society, but it alone will not restore normalcy for months. However, in combination with vaccination, the maximum suppression strategy described above can end the uncontrolled Canadian epidemic. This approach can minimize deaths and hospitalizations until vaccine uptake is sufficient to provide broad societal protection.

This maximum suppression strategy has many advantages. First and foremost, it minimizes loss of life and long term injury. In addition, both theory and experience suggest the approach minimizes economic disruption particularly for local businesses and industry. If implemented correctly, regional and provincial shutdowns can be entirely unnecessary for prolonged periods. Further, this strategy cumulatively in the long term also minimizes restrictions on civil liberties, including limitations of local travel and activities, compared to strategies that focus on protecting ICU capacity.

The advantages for the maximum suppression strategy are not theoretical. They have been proven. Countries that have adopted this strategy have far, far fewer deaths adjusted for population than Canada. Australia, a comparable country to Canada by many measures, implemented a maximum COVID-19 suppression strategy near the beginning of their epidemic using aggressive, well-staffed contact tracing, case/contact isolation, and where necessary, local and city-wide shutdowns. Adjusted for population, Australia has had 25-fold fewer cases and 17-fold fewer deaths than Canada. Some will argue that Australia, like Taiwan and New Zealand (whose infection and death rates are far lower than even Australia), isn’t comparable to Canada given that it’s an island with better control of its border. So let’s look at Canada’s four major Atlantic provinces which jointly adopted a maximum suppression strategy. Adjusted for population, the Atlantic provinces have 15-fold fewer cases and deaths than the rest of Canada and their local economy has fared much better, with far fewer shutdowns (even with the current situation in Nova Scotia) and substantially less severe restrictions on civil liberties.

Despite its clear advantages, adoption of this maximum COVID-19 suppression strategy is politically difficult in Western-style democracies. A strategy that focuses on avoiding health care system overload has the advantage, politically, of allowing senior provincial leadership to avoid restrictions of civil liberties until such time as there is an obvious need and demand for them due to obvious and extreme health system stress. Similarly, criticisms for substantial health care/public health and other necessary but costly expenditures are muted given the overt nature of the emergency. Some countries, such as those with authoritarian political systems or highly compliant/socially cohesive populaces have successfully implemented early aggressive COVID-19 suppression strategies. However, early adoption in Western-style democracies requires a scarce political commodity: credible, gutsy leadership willing to act in the best interests of their citizens before the need for such actions is obvious to voters. Late adoption of a maximum COVID-19 suppression strategy requires something even rarer among politicians: the ability to publicly concede a serious error in judgment.

As much as we might wish otherwise, COVID-19 is not done with us yet. The consistent failure to learn from the experience of other jurisdictions and even worse, failure to learn from our own miscalculations, is a sad statement on Canada’s political leadership. It is incumbent on provincial governments to recalibrate their approach given the positive experience of other countries and several of our own provinces. Had a maximum infection suppression strategy been adopted in Canada last year and had it been as effective as it was in the Atlantic bubble, simple high school math using raw data available on the Public Health Agency of Canada website shows us the likely outcome; hundreds or thousands of our fellow Canadians from each province would still be with us: Quebec, 10,530; Ontario, 7,370; Manitoba, 911; Saskatchewan, 434; Alberta, 1,877; B.C., 1,346 (data as of April 28, 2021). Given a more aggressive response with an aim toward maximum suppression of COVID-19 infections early in this epidemic, a total of over 21,000 Canadian lives could have been preserved.

How many more lives need to be lost before political leaders in this country adopt a better, more effective approach to this devastating, uncontrolled epidemic?