Canada’s admirable, doomed effort to save the world order

Terry Glavin: The ‘rules based world order’ is so badly broken that it now seems hardly worth defending. And the trouble started before Trump. 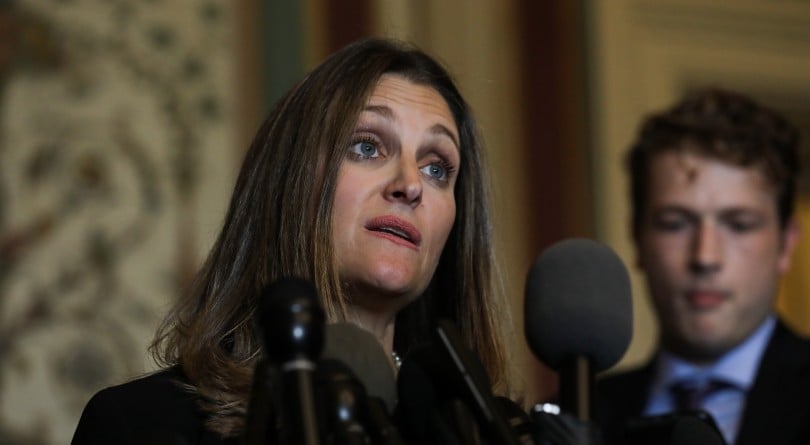 Amid the tumults set in motion by Donald Trump’s trade-war tariffs and his unhinged hostility following the calamity of the G7 summit in Charlevoix last week, the U.S. president’s weird carnival act with North Korea’s Kim Jong-Un in Singapore has only added to the anguish over the prospects for the “rules-based international order” that the Trump White House appears determined to abandon.

Because Canada is in the crosshairs of Trump’s belligerent invocation of “national security” as a pretext for protectionist American tariffs on steel and aluminum, and because Trump is giving every impression that the Canadian and European automobile industries are next on his hit list, it is fitting that Prime Minister Justin Trudeau and Foreign Affairs Minister Chrystia Freeland are rising to the global challenge of defending the post-war order that Trump holds in such contempt.

It’s heartening that the House of Commons is standing behind Trudeau and Freeland in a rare showing of cross-partisan unity. And Freeland was justifiably honoured this week with Foreign Policy magazine’s “diplomat of the year” award. But as eloquent and as articulate as Freeland was in her speech in Washington, D.C., Wednesday she sounded a bit like she was whistling past the graveyard of a thoroughly discredited global system that rewards crony capitalism, admits tyrants to its innermost circles, and has left the middle class of much of the world’s advanced economies “hollowed out,” as Freeland herself put it.

“The fact is, middle-class working families aren’t wrong to feel left behind. Median wages have been stagnating, jobs are becoming more precarious, pensions uncertain, housing, childcare and education harder to afford. These are the wrenching human consequences, the growing pains if you will, of the great transformative forces of the past 40 years,” she said.

A sterner-stuff assessment of the state of the international order Freeland defended in Washington came in another speech, also Wednesday, this one by German Foreign Minister Heiko Maas: “That world order that we once knew, had become accustomed to and sometimes felt comfortable in–this world order no longer exists.”

READ MORE: Can Chrystia Freeland talk some sense into the Americans?

Citing Trump’s “egoistic” America First postures, the Kremlin’s attacks on international law and state sovereignty, and the rapid, global advance of China, Maas said it was time for Europe to step in where the Trump administration has bailed out. “His policy of isolationism has left a giant vacuum around the world,” Maas said. “Who will fill this vacuum? Authoritarian powers? Anyone at all? Or will the European flag become the new banner of the free world, as the stars and stripes of the U.S. once were?”

Among Maas’s remedies: a proper EU-wide foreign policy and defence policy, an approach to Europe’s refugee crisis that focuses on curing the ills that produce refugees in the first place, and a place for a unified EU on the UN Security Council, in the chair where the German representative would sit.

One thing Freeland got indisputably right was her admission that in the free-market euphoria that followed the late 1980s’ collapse of communism in Russia and Eastern Europe, the world’s liberal democracies proceeded under an assumption that turned out to be exactly wrong. “This was the idea that, as authoritarian countries joined the global economy and grew rich, they would inevitably adopt Western political freedoms, too. That has not always happened. Indeed, in recent years, even some democracies have gone in the other direction and slid into authoritarianism—notably and tragically Venezuela. And some countries that had embarked on the difficult journey from communism to democratic capitalism have moved backwards,” she said, citing Russia and China as “a rebuke to our belief in the inevitability of liberal democracy.”

Within democracies, too, homegrown anti-democratic forces are on the rise, right at the moment that liberal democracy is under assault from abroad. “Authoritarian regimes are actively seeking to undermine us with sophisticated, well-financed propaganda and espionage operations. They seek to suborn smaller countries, those wavering between democracy and authoritarianism,” Freeland said. “The idea that democracy could falter, or be overturned in places where it had previously flourished, may seem outlandish. But other great civilizations have risen—and then fallen.”

It’s not just Canada and Europe that have been thrown for a loop by the rise of Trumpism, and the American retreat from the world began years before Trump’s election. The Middle East is in a state of upheaval unlike anything in a century. The vast benefits the Khomeinist regime won in Barack Obama’s nuclear deal with Iran—billions of dollars of sanctions relief and the promise of an end to trade isolation—have not exactly encouraged the ayatollahs to embrace the Universal Declaration of Human Rights. The opposite has happened, and the regime has simply re-invested in its Qods Force and Hezbollah terror operations on behalf of Bashar Assad in Syria.

Japan has become increasingly nervous that the United States can no longer be trusted to serve as a security bulwark against China and North Korea. This week’s Singapore summit, and Trump’s declaration that North Korea no longer poses a threat, and that decades of U.S. joint military exercises with South Korea will be coming to an end, have heightened Japanese anxieties.

Writing in the Japan Times this week, Shihoko Goto, senior associate for Northeast Asia at the Wilson Center’s Asia Program, warns that Japan’s long-standing focus on preserving the status quo is now untenable, and Japan’s post-war constitutional restraints on military power will need to be revisited. “Reforming the Constitution and increasing military spending will become a necessity, but at the same time, Japan’s need to enhance diplomatic relations with neighboring like-minded countries, especially South Korea, will only grow.”

While Trump routinely reverses himself, shifts erratically and contradicts his own stated policies, he’s not exactly a complicated person. He feels right at home in the world of the one-percenters, the gangster oligarchs and corrupt plutocrats who have flourished in all their gaudiness and vulgarity under the rules—or at least despite the rules—of the World Trade Organization, the International Monetary Fund, NAFTA, the European Union’s common market, and so on.

Trump knows very well that the game is rigged, and that the game is over. Following the economic crisis of 2008, huge swathes of the American workforce were cast adrift, and their prospects remain bleak. The United Kingdom’s hopes for a sensibly negotiated Brexit break from the European Union are growing ever dimmer, and Westminster is close to paralysis. The EU has been shaken to its foundations by the rise of gruesome authoritarians in Greece, Austria, France, Italy and Hungary, animated largely by the hundreds of thousands of refugees that have been streaming across the Mediterranean.

Trump’s remedy at home is twofold: enrich the American corporate sector with unsustainable tax cuts that threaten the long-term viability of social security, medicare and federal pensions, and rally the disaffected white working class with bread and circuses, national chauvinism and beggar-thy-neighbour protectionism.

Trudeau’s proposed formula to survive the challenges to globalization is to strengthen Canada’s “safety net” while extending the global reach of free trade, especially into China, in a modified, tinkered-with model that would purport to secure labour rights, women’s rights and environmental protections.

But that remedy, too, has been rendered largely obsolete by Chinese President Xi Jinping’s declaration that the Communist Party’s illiberal state-capitalist model should supplant the traditional American-led world order. Beijing has made it abundantly clear that Trudeau is going to get nowhere with his idea of a free trade deal with China that protect’s workers’ rights and the environment.

Besides, China openly ignores commitments it has already made under the International Covenant on Civil and Political Rights. Why would some codicil appended to a Canadian free-trade pact be any different?

The European Union spent years deluding itself in the assumption that Recep Erdogan’s Turkey would reform itself sufficiently to be granted full EU membership, but Erdogan has lately dragged the country back into an authoritarian dystopia that more closely resembles Russia or Iran than any western European country.

No better behaviour should be expected of Kim’s slave state, and there was nothing in the joint Trump-Kim statement released following their meeting in Singapore that anticipated a change in behaviour at all. With its nuclear program mothballed, Pyongyang would be permitted to persist as the administrative centre of a vast prison camp, and Kim’s cronies would carry on as the overlords of a brutalized, captive population of 25 million people.

That is the “rules based world order” for you. You can slaughter innocent civilians with barrel bombs but not poison gas. You can threaten your neighbours with mortars and rockets but not nuclear weapons. As long as you make a showing of following WTO rules, or you host foreign trade delegations eager to secure free trade agreements, you can imprison tens of thousands of Muslim Uighurs in re-education camps. You can get away with murder.

No matter how grave the threat Donald Trump presents to it, this is not a world order worth defending in the first place.