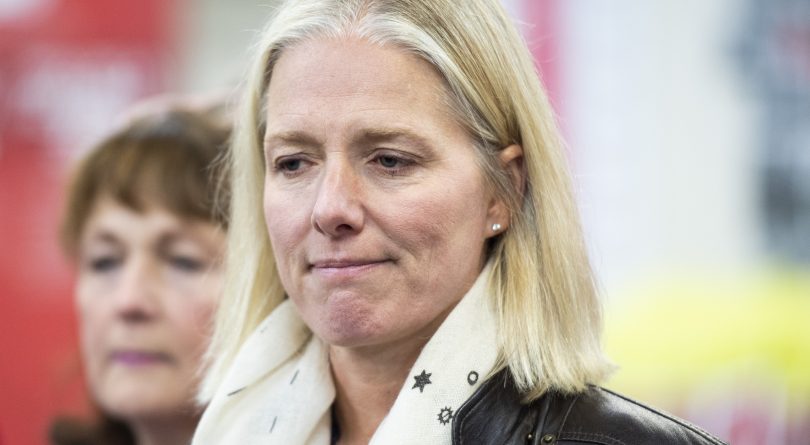 Re-elected Liberal MP Catherine McKenna speaks to reporters after her campaign office was defaced with a misogynistic slur, in Ottawa, on Thursday, Oct. 24, 2019. (CP/Justin Tang)

Catherine McKenna has had a difficult four years. The MP for Ottawa Centre and former minister of environment and climate change was faced with constant online abuse as she became the face of the Liberal carbon tax in an ever-intensifying culture war between climate change believers and deniers. Despite the negativity and vitriol, McKenna won her seat on Oct. 21 and was named minister of infrastructure earlier this month.

Even after the gruelling election was over, the hate towards McKenna continued, when a misogynistic slur was spray-painted on her campaign office.

She was in the news again recently, this time for tweeting a tearful video from her office in Ottawa, where she held on to a handmade calendar crafted by her children, counting down the final 10 days of the election. They wrote little encouragements on each page. She thanked her three children for their support during the campaign—they were the ones who helped her on the “hard days.”

MORE: Why would anyone hate Catherine McKenna?

The video gained plenty of attention and Twitter users were divided. Some were quick to respond with more ‘climate Barbie’ insults, accusations of victimhood, and rants about women’s emotion-based decision-making. In response to commentary about the video making some people uncomfortable, McKenna had few words: “I’m a woman in politics and I’m just going to own it,” she said.

I believe the video is vulnerable, inspiring and deeply human. And most of the responses on Twitter commended McKenna for her honesty. Showing emotion ‘proves you are human,’ one user writes. For me, it was also a source of inspiration; McKenna showed us that having emotions and an important job are not mutually exclusive. And her decision to share her feelings with an online audience—one that’s waiting to pounce—was a fearless move.

It’s heartening that a woman in power shared her professional challenges and struggles, as well as the fact that she leaned on her children to get through it. Children, McKenna says, motivate her to do her job. “It’s really about the future we want and it’s about our kids,” she states in the video.

For a lot of people across the country, myself included, this was a difficult election. Thankfully, even though they didn't sign up for this, my kids have been there for me since the beginning — and they helped make this election pretty special. I couldn't be more proud of them. pic.twitter.com/Zu9mSkwugh

McKenna’s perspective as a mother also reframes the role children can play in a politician’s life. They’re more than just props in a photo-op, set up to make a politician look family-oriented to voters. “They—[my children]—didn’t necessarily get into this,” she said. To me, McKenna was reflecting on all of the anger and hate targeted at her during a “difficult” and “negative” election, and how her children were witness to it.

After McKenna’s office was vandalized with the vulgar and sexist slur “c–t,” she called it an attempt to “chase women out of politics.”  Her resilience should encourage women. Her tears show us that she’s human and not some political archetype crafted by centuries of masculine ideals. McKenna teaches women that they don’t have to be emotionally detached while holding a position of power. There is strength in vulnerability.

Research suggests that showing emotion and vulnerability is a bad idea for leaders, while other studies say confidence, emotional intelligence and stability are markers of a great leader. This could be the reason why some people were uncomfortable or unimpressed with McKenna’s message, because it didn’t conform to how people believe a leader is always supposed to present herself.

McKenna’s emotional display demonstrates her authenticity and ability to be empathetic, traits we desperately need in all our politicians today.