Marie-Danielle Smith: 'Arruda matata' is but one variation on a theme. The stars of head doctors in British Columbia, Alberta and other provinces are also rising. But the diversion is not problem-free. 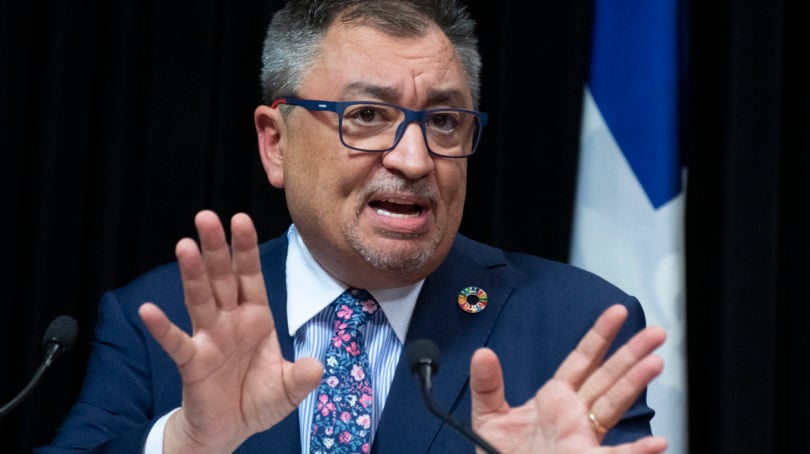 Horacio Arruda, Quebec director of National Public Health responds to reporters during a news conference on the COVID-19 pandemic, Tuesday, March 31, 2020 at the legislature in Quebec City. THE CANADIAN PRESS/Jacques Boissinot

“They put my face on a bread,” said the bespectacled man to the person taking his picture, holding up his phone to show an Instagram post of a round loaf with a bespectacled face emblazoned in the layer of flour on top.

The face is also on T-shirt designs and colourful jewellery. It is photoshopped onto the bodies of superheroes and religious and historical figures. Outlines of the face are made available on a regular basis so that devotees can print them out and colour them in, for submission to the fan page. Other admirers draw or paint the face from scratch. Someone recently made a felt doll.

The beloved man in the bold glasses is Dr. Horacio Arruda, Quebec’s chief public health officer, whose colloquial no-nonsense tone and dramatic gesticulations have become a comfort during a time of prolonged isolation and fear.

(The Journal de Montréal’s “Sac de chips” blog recently published a helpful quiz to find out which pair of his glasses you “are.” The thin-rimmed artist glasses, for example, show the light-hearted spirit of a comedian who wakes up humming a theme song. The thick, black science glasses indicate an enjoyment of cross-referencing statistics and rejecting fake news. The pins on Arruda’s suit are another subject of fascination.)

At daily briefings next to Premier François Legault—whose government is enjoying a 95 per cent approval rating for its handling of the coronavirus threat—Arruda’s serious public health advice comes with a side of humour. To socialize without leaving the house, he suggests organizing a line dance on FaceTime. To demonstrate “flattening the curve,” he smashes one palm against the other in horizontal applause (now a popular gif).

Arruda professed a love for Portuguese egg tarts early in March. Google trends show searches for “tartelettes portugaises” have skyrocketed. A 40,000-strong fan page on Facebook, “Horacio, notre héros,” live-streamed a cooking class. Your relatives in Quebec are, at the very least, passingly aware of the tarts. More likely, they have already downloaded a recipe. Probably Ricardo’s.

Although Quebec has perfected the art of public health fandom, Arruda matata (a frequent catchphrase of the fan page) is but one variation on a theme. (It ain’t no passing craze.) The stars of head doctors in British Columbia, Alberta and other provinces are rising, too—inspiring songwriters, fashion designers and regular people who need some hope to cling to while the terrifying COVID-19 statistics pile up.

Not to mention Dr. Theresa Tam, Canada’s Chief Public Health Officer, whose suggestion to #plankthecurve has inspired many a home workout, and whose face is now extremely well-known to those surfing Canadian TV channels, even if they haven’t been watching federal briefings.

In B.C., Dr. Bonnie Henry’s Twitter fan page—“a curated archive of gratitude and kind words” has just under 8,000 followers. It recently posted a graphic of Henry as Wonder Woman.

In Alberta, Dr. Deena Hinshaw wore a periodic table dress one day and caused a B.C. shop to quickly ramp up production of its design. A Facebook fan group for Hinshaw with about 6,000 members asks prospective joiners to affirm they have been social distancing before accessing its posts. Calgary fashion brands SophieGrace and Madame Premier collaborated on limited-edition T-shirts featuring portraits of Tam, Henry and Hinshaw. Meanwhile, a Twitter page celebrates the scarves of Toronto’s medical officer of health, Dr. Eileen de Villa. “We love a statement pattern,” says one post.

RELATED: ‘Am I at risk if I pass someone on a crowded sidewalk?’ (and 11 other coronavirus questions)

Over in Nova Scotia, a poll from the Coast newspaper prompted memes featuring Dr. Robert Strang as Marvel’s Doctor Strange. He and Premier Stephen McNeil are also (lovingly, we hope) compared to Statler and Waldorf from the Muppets. Strang’s daughter recently thanked neighbours for erecting signage near their house that thanked her father for his work.

A recent poll by Public Square Research and Maru/Blue shows Canadians put a good deal of trust in their public health officials. In Quebec, fully 64 per cent trust Arruda “a lot,” and another 20 per cent “somewhat.” In B.C., Henry is trusted “a lot” by 54 per cent and “somewhat” by 28 per cent; in Alberta, the numbers are 55 per cent and 30 per cent respectively. In Ontario, fewer people describe trusting David Williams a lot (21 per cent) or somewhat (28 per cent). There, the top doc is the subject of far fewer memes. Coincidence?

The numbers pollsters provided to Maclean’s reflect the views of about 800 people in each of those provinces between March 25 and 27.

RELATED: What to do if you’re laid off because of the coronavirus

Of course, all of this goodwill doesn’t mean no worries for the rest of your days, or even a diversion that’s completely problem-free.

To hear a smart person speak calmly about their field of expertise is a refreshing change from the often-empty-sounding talking points of our politicians. To know that a medical doctor is sitting next to your premier—or Zooming with your prime minister—during a pandemic is to know that the concept of “evidence-based policy” may genuinely be playing out.

But should Canada’s current COVID-19 strategy prove inefficient—and, really, even if it works—the same figures we hail today as our public health heroes could become targets of blame. The far-reaching implications of their advice could contribute to policy failures that are outside their control or expertise. We heart Dr. Henry, but we should remember that she is a formidable medical expert, not an economist or legislator.

RELATED: A heat map of coronavirus cases in Canada

Dr. Hinshaw’s Facebook fan group has already had difficulty moderating away comments that complain about the province’s response, or offer false urban legends about how to beat the ’rona. Dr. Tam, who is of Asian heritage, has received endless vitriol on social media.

The kindest thing public health buffs can do is be aware of the pedestal they’re putting their heroes on. If we respect these officials enough to follow their prescriptions and put their faces on our T-shirts—or on our bodies, because mark my words: when tattoo parlours eventually reopen at least one Quebecer will get an Arruda tattoo—we should respect them enough not to trust them blindly, or pray to their icons, to know that they are fallible humans, doing their best just like everybody else.

So let them continue to earn our trust. And if they inspire scarf-wearing or a creative twist on our nation’s new favourite pastime, stress baking? We could all use a little fun to “leaven” the situation.