Colin Kaepernick, Nike and the politics of brands

Anne Kingston: The NFL player's provocative deal with Nike shows how consumption can be conflated with political action 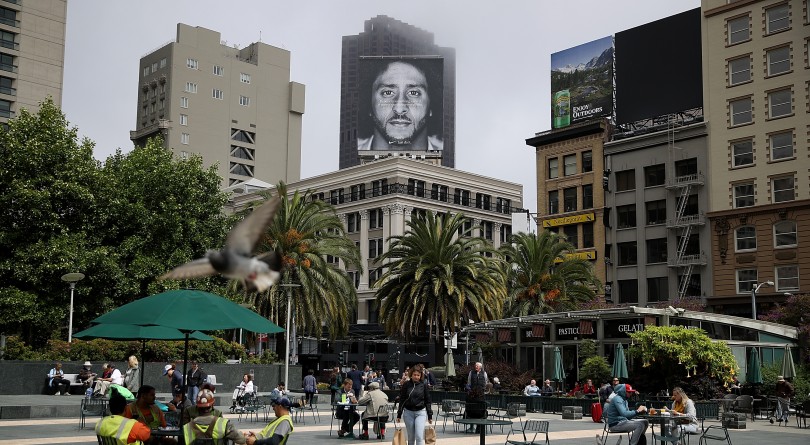 Nike’s first ad featuring Colin Kaepernick’s voiceover delivers the kind of inspirational, emotional wallop associated with long-ago political oratory. Its tagline, “Believe in something. Even if it means sacrificing everything,” has resonance given Kaepernick’s history: the former San Francisco 49er led NFL players in taking a knee during the national anthem to protest police shootings of unarmed black men. The ad movingly celebrates the very groups mocked and attacked by the Trump administration: the disabled, refugees, people of colour, those facing medical crises. Viewers will be so moved they’ll forget it’s an ad.

Don’t. It offers a reminder of how corporate brands have become enmeshed in the political process, and how consumption can be conflated with political action.

Nike is selling cross-trainers here, of course, via lofty ideals—to aspire, to defy, to take risks, to dream big. Bringing Kaepernick onside is brilliant: his act of conscience made him a target of Donald Trump, got him fired and now makes him unhirable in football. Nike no doubt anticipated the controversy. Rapturous praise on one side was countered by condemnation expressed in violent, self-defeating imagery: Trump supporters burned their Nike shoes and cut Nike’s swoosh logo off clothing while wearing it. Apex Marketing Group calculated Nike received some $43 million in media exposure in 24 hours—$19.01 million positive, $10.91 million negative and $13.76 million neutral.

READ: What Colin Kaepernick can teach us about citizenship

Nike knows its market, unlike The New Yorker, which, just as the sports giant unveiled Kaepernick, shot a hole in its esteemed liberal brand with news that the former Trump adviser Steve Bannon, now a global-white-supremacist-strategist-for-hire, would be interviewed by editor David Remnick at the magazine’s annual festival. The spectre of Bannon’s noxious ideology normalized in polite conversation at a glossy Lollapalooza for fashionable thought, met with predictable hellfire; within hours, the invite was rescinded.

Bannon’s brand, of course, is rooted in a presidency built on branding—and which is now systematically dismantling branding’s central tenet: trust. Historically, branding is a promise kept between producer and consumer; if broken, so is the brand. The 20th century saw an add-on as brands assumed symbolic, even transcendent meaning: the consumer absorbs, as if by osmosis, qualities of the brand—or its front-person, as seen with Trump. His supporters believed his glister-laden eponymous brand would rub off on them. Now, even as the Trump brand is repeatedly undermined—fines for the fraudulent Trump University, Trump’s lies and blatant attempts to monetize the office, Ivanka Trump’s failed clothing line—loyalty to the Trump brand has remained strong.

No surprise there. Trump may not understand the U.S. Constitution or government, but he gets branding. That’s why he singles out big brands—Google, CNN, the New York Times—for attack. It also explains his unusually temperate response to Nike hiring Kaepernick; he understood that the fuss would give Nike a bump. Talking with the right-wing website The Daily Caller, Trump said, “I wouldn’t have done it,” before laying out why business shouldn’t follow rules: “In another way, it is what this country is all about, that you have certain freedoms to do things that other people think you shouldn’t do.”

Brands’ new ability to survive a major breach of trust is also evident at Facebook and Twitter, whose platforms spread false information that paved the way to both Trump’s win and Brexit. “Trust is the cornerstone of our business,” Facebook COO Sheryl Sandberg testified before a recent Senate hearing into what social-media platforms were doing to stop misinformation. “People have to trust that what they see is authentic.” She went on to say that Facebook is countering fake news with “alternative facts.”

The confusion created by politicized branding was perfectly captured as people took to Twitter to announce they were cancelling their New Yorker subscriptions over the Bannon invite—at the very moment it was revealed Twitter CEO Jack Dorsey overruled staff to allow white supremacist Richard Spencer and conspiracy theorist Alex Jones* to remain on the platform, spewing hate and lies while generating profitable clicks.

Against such a backdrop, Nike’s bold, if divisive, hire of Kaepernick could suggest it’s sponsoring the resistance. But the swoosh isn’t going to trump TRUMP™ as a result of buying stuff or tweeting out Nike’s uplifting, heart-warming commercial. ‘Just do it’ is a consumer bromide that could variously mean ‘run a marathon,’ ‘rob a convenience store’ or ‘vote for change.’ As Colin Kaepernick has shown, without action, the words mean nothing.

* Updated: On Sept 6, Alex Jones and his network, Infowars, were permanently banned from Twitter.