Akolisa Ufodike, Susanna Ally and Louis Butt: In order to address systemic racism, we must discuss the Conservative Party's policies on immigration, the economy, education, cultural outreach and data collection 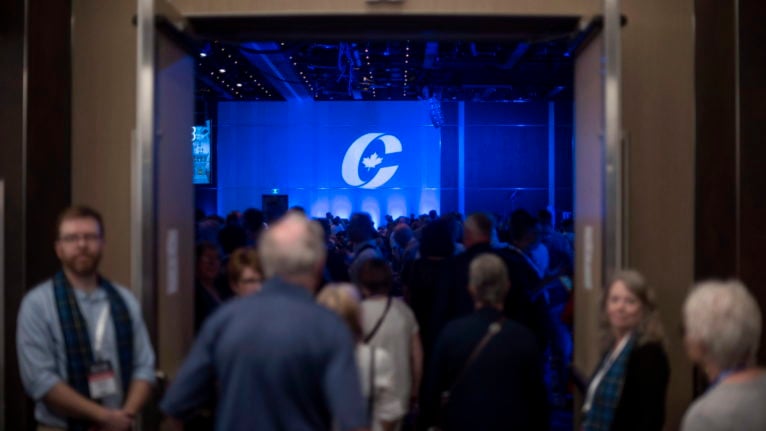 Supporters enter the auditorium for the opening ceremony at the Conservative national convention in Halifax on Aug. 23, 2018. (Darren Calabrese/CP)

Akolisa Ufodike is the chair of the National Council of the Association of Black Conservatives, and Susanna Ally is a board member. Louis Butt is a recent University of Toronto graduate in history and political science.

It can be argued that two topics leading discussions in 2020 are COVID-19 and racism, particularly anti-Black racism. While these discussions around anti-Black racism have been loudest in the U.S, Canada has not escaped the calls to address the systemic issues that exist here.

In a recent interview with the Globe and Mail, former prime minister Brian Mulroney discussed the need for Canadian political leaders to rethink current practices to address the economic damage of COVID-19 and the prevalence of systemic racism, especially Canada’s treatment of Indigenous people. His recommendations prioritize strong economic and social policies including a dramatic increase in immigration.

It is unfortunate conservative values do not first come to mind when reflecting upon best practices to address systemic racism.

The Association of Black Conservatives believe that a Conservative Party anti-racism framework which includes bold economic and social policies is achievable. In order to address systemic racism, we must discuss the Conservative Party’s policies on immigration, the economy, education, cultural outreach and data collection.

The Conservative Party can no longer afford to have its immigration policies defined by opponents who are able to paint an inaccurate picture of the party’s stance on immigration. While the Harper era increased the length of time required to become a Canadian citizen, Jason Kenney, Canada’s longest serving immigration minister, welcomed the highest number of permanent residents under any minister.

Increasingly, immigrants have come to Canada as skilled economic migrants. In developing an immigration policy, the Conservative Party should look at legislation which does away with employers’ ability to request “Canadian experience” as this discriminates against immigrants. We have heard first-hand stories from newcomers facing difficulties gaining professional employment due to the Canadian experience requirement, and would encourage collecting more formal data on this.

In addition, there must be a discussion on Foreign Credential Recognition (FCR) for newcomers. The Conference Board of Canada estimates that $17 billion could be generated in the Canadian economy if newcomers could work in their respective fields of interest and/or study. Easing these systemic barriers will have positive results for Canada. Various provinces have taken steps to address this.

Most recently, Alberta passed Bill 11, the Fair Registration Practices Act, which will not only speed up the process for getting credentials recognized, but also ensure registration practices are transparent, objective and fair. Policies like this should be replicated at the national level.

Left-leaning parties respond to what they perceive as the core concerns (immigration and social issues) of visible minority communities with symbolism.

This is illustrated by Alberta NDP MLA David Shepherd when he was asked about what initiatives the Alberta NDP undertook to address police carding. He responded by acknowledging they did not take the necessary steps to address carding however, they “worked to empower these communities and to lift them up, to include them in the $25-a-day daycare, to make sure they had the opportunity to access grants, to make sure that they had the opportunity to sit with us and tell us what they needed”.

In response to the anti-racism protests of 2020, Prime Minister Justin Trudeau bowed a knee but offered no substantive actions to address the issues. This is in contrast to Alberta, where Justice Minister Doug Schweitzer committed to speed up the review and modernization of the Police Act and address the lingering issues of systemic racism, such as carding.

Education is an important topic for all Canadians. About one-third of the population lives with children at home, this is the same for minority groups. A 2016 Statistics Canada survey on education and labour market integration of Black youth in Canada found that among Black youth aged 15 to 25, 94 per cent of them wanted to achieve higher education, but their optimism about what they were expected to achieve dropped to 60 per cent. Contributing factors include socioeconomic status (21 per cent of Black adults are low-income compared to 12 per cent of the rest of the population), lack of representation of Black teachers, and negative attitudes and perceptions of Black students.

For example, in Ontario, this has led to students being discouraged and streamed into “applied” fields when they could easily excel in the “academic” streams. This practice of streaming has heavily disadvantaged Black students. The Conservative government of Ontario recently announced it would end this systemic discriminatory practice. Decisions of this nature will go a long way in opening opportunities for minority communities. In addition, we should look at developing matching grants and scholarships to further reduce barriers and provide greater access to continued education for racialized students.

Representation matters. We can no longer hide under the guise of “identity politics” or the idea that “targets are quotas” and hence, bad. The Conservative Party needs a meaningful and deliberate policy on multiculturalism. The Association of Black Conservatives is one such effort towards encouraging multiculturalism and ethnic outreach; this is a model that should be welcomed and replicated within other minority communities by the party.

The party needs to actively commit to targets to achieve equity, diversity and inclusion starting with party membership, party staff, candidates, political staff and board appointees. There is an argument that doing this means quotas, but this argument falsely assumes that qualified or competent visible minorities candidates do not exist. Not only is this false, but multiple studies, such as a 2020 study by Zuhra Abawi and Ardavan Eizadirad of Niagara University and Wilfrid Laurier University, respectively, have shown that there is a range of biases in hiring practices for racialized candidates, including being far less likely to be called for an interview, compared to their non-visible minority counterparts who have equivalent qualifications and experience. The party needs to adopt policies that are intentional about diversity.

Lastly, Conservatives value evidence-based decision making. Therefore, let’s advocate for better data to inform our policies. Data collection is an important step in being able to identify and address an issue.

Take COVID-19 for example. The Centers for Disease Control  noted “long-standing systemic health and social inequities have put many people from racial and ethnic minority groups at increased risk of getting sick and dying from COVID-19“. Currently, Canada has not collected race-based data for COVID-19, regardless of repeated calls to do so. We’ve recently learned, thanks to the data from the City of Toronto, that 83 per cent of COVID cases in the city are racialized people.

Most Canadians may know that Canadian immigration laws prior to 1962 included racial and other discriminatory provisions. However, most may not know that  it was John Diefenbaker, a Conservative prime minister, who introduced the Bill of Rights in 1960 and thereafter Order-in-Council PC 1962-86, which eliminated all racial discrimination from Canadian immigration laws and instead replaced it with the skilled-based points system which continues until this day.

Conservatives can continue to lead on the issue of anti-racism over the symbolism of left-leaning parties by instituting meaningful policies that empower communities.