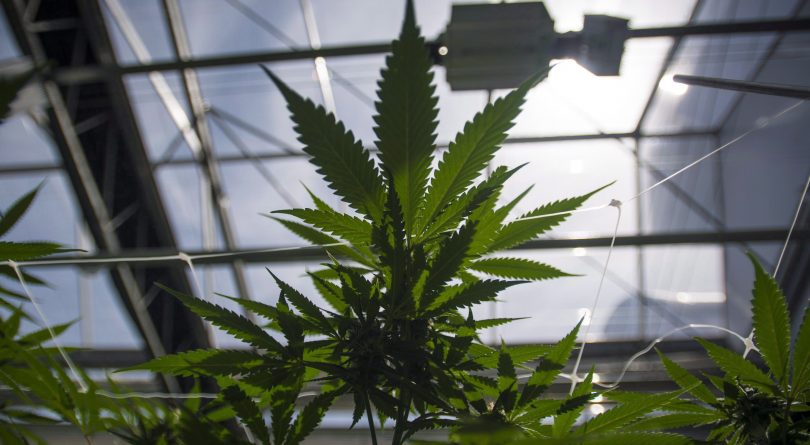 CannTrust Holdings Inc. says its board has terminated CEO Peter Aceto with cause amid an ongoing Health Canada investigation into alleged illicit activity at the cannabis company. Cannabis plants are photographed during the grand opening event for the CannTrust Niagara Greenhouse Facility in Fenwick, Ont., on Tuesday, June 26, 2018. (Tijana Martin/CP)

Kate Robertson has covered Canada’s cannabis industry for three years. She has written for the Globe and Mail, The Guardian, NOW Magazine, as well as cannabis-focused publications such as Leafly and Weedmaps.

Conservative pundits are already blaming Justin Trudeau’s Liberals for the latest scandal to hit Canada’s burgeoning cannabis industry. After a whistleblower tipped off Health Canada that Ontario-based CannTrust had grown cannabis plants in unlicensed rooms, a Globe and Mail investigation indicates that company executives were not only aware of the situation since last fall, some of them suspiciously sold off $6 million in shares the same day the chairman was notified of the unlicensed grow. Insider trading, in other words.

“The legalization of cannabis for adult recreational use was an opportunistic, ill-considered, policy by the Liberals,” wrote Financial Post columnist Diane Francis on July 30. “Corporations went public in haste, and this first scandal should make investors cautious.”

Sorry, but it’s way too late for investor caution. Thousands of Canadians, many of whom have never and will never even try cannabis—people like my electrician and my next-door neighbours—have invested their hard-earned coin in Canadian weed companies, convinced by mainstream media and [mostly] men in suits that the industry is a legitimate one.

MORE: The reason that cannabis is now legal in Canada

Scandals like CannTrust’s—along with OrganiGram, Bonify, Aphria, Agrima, and yes, Canopy Growth—affect a lot of Canadians. They, along with the sizable and sophisticated illicit market, are solid ammunition to direct at the Liberal party.

Conservative leader Andrew Scheer has walked back statements he made last year about re-criminalizing cannabis (likely from pressure from the numerous members of the weed world that are card-carrying Cons), the last thing the industry desires is more regulatory oversight and expensive rules to comply by.

What’s not too late is for Conservatives to politicize challenges with the Liberals’ weed plan in this October’s election and pitch radical changes to the program.

But what, exactly, would Andrew Scheer’s team do with the already highly regulated, very-expensive-to-comply-with Cannabis Act and Health Canada regulations? As it turns out, mandating that a camera needs to record and account for every single centimetre of a licensed grow room doesn’t prevent bad behaviour.

If not more compliance, then what? Harsher penalties for offenders? I don’t agree Trudeau is to blame here. Instead, we need to ensure that the consequences for offenses are consistent and fair.

MORE: Cannabis is legal. Now about those pardons for pot possession?

The weed community tends to loathe any kind of criminalization associated with cannabis, but we’ll be watching two things very closely: how authorities deal with legal cannabis market offenders and how they compare to those who make parallel offences in the illicit market; and how an insider trading scandal in the weed industry is dealt with compared to other insider trading scandals in other industries.

How authorities proceed should send a warning to the industry to follow securities law and the Cannabis Act while also protecting shareholder interests. That’s a delicate balance, and will likely create another unfair schism between the black and legal markets: public, legal companies are already facing fewer and less harsh consequences to the same offences under the Cannabis Act seemingly for that reason.

On July 29, Toronto Police charged a 37-year-old for possessing one gram of illicit cannabis outside a dispensary while three executives at Winnipeg-based Bonify did not face any criminal charges after it was alleged that 200 kg of illicit product was purchased to resell to medical consumers. Instead, they lost their jobs and the company’s licence was suspended.

A National Post report revealed that the RCMP chose to keep an illicit cannabis seizure “of unfathomable quantity” on a Canopy Growth plane a secret. Why? Partly out of concern for how the company’s shareholders would be impacted, according to documents.

MORE: The Maclean’s Quiz: How much do you know about cannabis?

As for everyone in Canadian cannabis, please try to remember that you wouldn’t exist without people investing in you. Most public cannabis companies are “pre-revenue.” Their operations, salaries, the flights to panel discussions at pricey, international conferences, and the coveted free swag that consumers are collecting? It’s funded by shareholders, many of whom just lost a huge chunk of dough gambling on you.

The reported actions by CannTrust executives have let them down most of all and should be sobering news to the cannabis industry. Stop worrying so much about pushing the envelope or not being the most egregious offender—think long-term, not short-term, and learn to grow stellar, regulated bud. That will win us over.