Pick our fruit, get COVID-19

Sadiya Ansari: Canada's immigration system doesn’t provide citizenship paths to so-called 'unskilled' labour, fails to recognize their worth and, as a result, fails to protect them 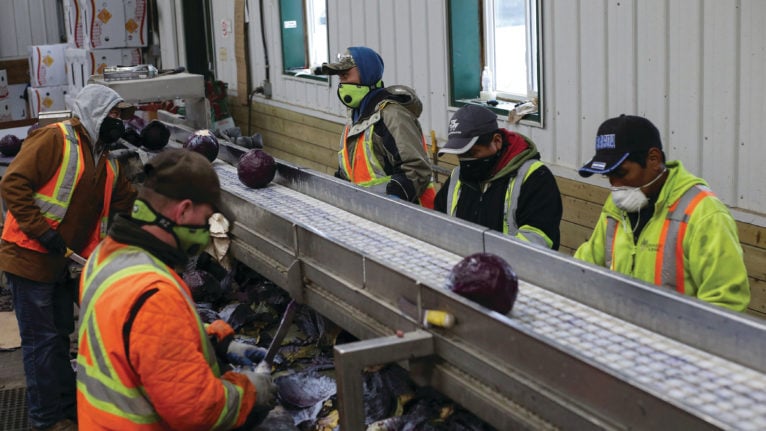 In June, after a third migrant worker died from COVID-19, Ontario Premier Doug Ford announced that asymptomatic farm workers with the virus could continue to work. Over 600 migrant workers across Canada tested positive for coronavirus by the end of June.

During a global pandemic, when every government is focused on halting the spread of a virus that can kill, how can Canadian workers be treated with such disregard? Well, that’s the crux of the problem—they’re not Canadian. Nearly 60,000 farm workers in this country are largely from Mexico and the Caribbean, here to do a job Canadians no longer want to do—grow the food that sustains us.

The coronavirus has further exposed Canada’s exploitative immigration practices—an immigration system that doesn’t provide citizenship paths to so-called “unskilled” labour, fails to recognize their worth and, as a result, fails to protect them. These workers are essential enough to cross the border into Canada during a pandemic, but their poor living conditions exacerbate their vulnerability to the virus.

Farm workers have been coming to Canada for over 50 years through the Seasonal Agricultural Worker Program, first launched in partnership with Jamaica, which now includes 11 other countries such as Mexico, Barbados and Grenada. Canada has a permanent labour force shortage in the sector, projecting a lack of 123,000 workers by 2029. To fill this gap, the government thinks it’s appropriate for people—mostly Black and brown people from much poorer countries—to spend up to eight months of the year working away from their spouses and children without a social safety net, rather than inviting them here as permanent residents. Some workers have returned every year for over 20 years.

Most work permits for these workers are tied to employers, creating conditions for abuse including overcrowded housing, wage theft and surveillance. A 2019 Toronto Star investigation detailed 3,100 complaints made to Mexico’s ministry of labour about the program since 2009. About 40 per cent of those complaints were regarding living conditions, including a rat infestation, no running water, open latrines, and sleeping on tables and chairs.

Recently established federal regulations stipulate that workers must be quarantined for 14 days after arriving in Canada, and paid the equivalent of 30 hours a week during this time. If a worker gets sick after their quarantine, they may be eligible for CERB under the same restrictions as other Canadians—having worked 5,000 hours in Canada in the last year. But paid sick leave isn’t guaranteed, as it depends on provincial regulations. Like most provinces, there is no requirement for employers to pay sick leave in Ontario, where most migrant workers are located. In Quebec, which brings in the second-highest number of farm workers (over 14,000 in 2018), two days of sick leave are legally mandated but access isn’t guaranteed—lack of access to information, language barriers and fear of employer reprisal are real barriers.

A report published in June from the national advocacy group Migrant Workers Alliance for Change, which compiled complaints from more than 1,100 workers, showed that 316 workers weren’t paid in part or in full for their quarantine period, and 539 reported they didn’t have enough food to eat.

Once on the job, 128 workers said they had to work intense hours, sometimes weeks without a day off. “We’re treated like machines,” said Raymond, a worker from Jamaica who was quoted in the report and who has been coming to Canada for 11 years. “We just want them to recognize that we’re still human.”

The federal government has committed to step up inspection efforts. But that won’t take much. Its inspections of housing conditions on farms in Ontario from March to June were done remotely, without travelling to the actual sites. It’s not surprising no violations were found.

While there are reports stating that some workers only have the personal protective equipment (PPE) provided to them by their own governments before arrival, Health Minister Patty Hajdu acknowledged that PPE was likely the least of their worries.

“All the PPE in the world will not protect you if you are sleeping in a bunkhouse that is housing 12 to 15 people that may not have any ability for distancing, certainly no private washrooms or kitchen,” she told senators on the social affairs committee in late June.

When Sen. Ratna Omidvar asked if that meant the government was going to implement housing standards for migrant workers, Hajdu didn’t answer the question: “Minister [Carla] Qualtrough and I are working right now on her ideas on how to reform the temporary foreign worker program.”

It’s downright disingenuous for the government to act like the deplorable living and working conditions these workers face is new information that requires new ideas for reform. This follows the government’s penchant for taking up social justice causes with empty words and gestures—take Justin Trudeau kneeling in front of protesters at an anti-racism rally—as if they are advocates themselves. They most certainly are not. They have had all the power to change these well-documented problems.

While being paid for quarantine time and access to paid leave are small steps toward the safety net migrant workers need, these are band-aid solutions to a much larger problem. The solution to a labour shortage that stretches back over 50 years is clear: give these essential workers a path to Canadian citizenship.

This article appears in print in the August 2020 issue of Maclean’s magazine with the headline, “Pick our fruit, get COVID-19.” Subscribe to the monthly print magazine here.