Could Chrystia Freeland save Canada?

Max Fawcett: If the Liberal government wants to contain the spread of Western alienation, they should turn to their most powerful Albertan—Chrystia Freeland 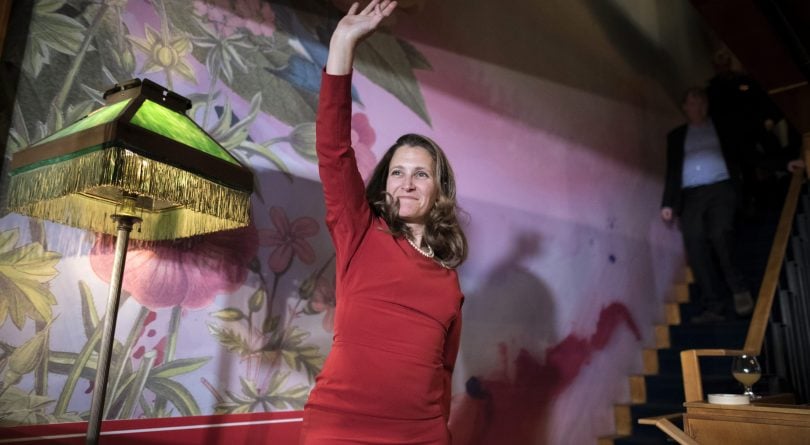 Liberal candidate Chrystia Freeland waves to her supporters as she arrives at the Peacock Public House to celebrate her win on election day in Toronto on Oct. 21, 2019. (CP/ Tijana Martin)

It’s been a long time since separatism was a meaningful issue in Canada, but Monday’s election results seem to have brought it back to the fore. In Quebec, the Bloc Québécois surged back to political relevance by winning 32 seats, while the Liberals were shut out of Alberta and Saskatchewan in a way that was reminiscent of the last Pierre Trudeau government in the early 1980s.

In some ways it’s worse in Alberta and Saskatchewan now than it was a generation ago, as former politicians like Jay Hill and Danielle Smith give voice—and political oxygen—to the so-called “Wexit” movement. Never mind, for the moment, that the idea of Western separation is fundamentally flawed, or that it would solve none of the problems (principally the restoration of the energy sector to its past glory) that its supporters like to pin on Confederation. Illogical economic and political arguments didn’t stop Britain from supporting Brexit, after all.

If the Liberal government wants to contain the spread of Western alienation, it should turn to the most powerful Albertan in its midst to do it: Chrystia Freeland. Yes, she technically represents the downtown Toronto riding of University-Rosedale, but her Alberta roots are deep. She was born and raised in Peace River, and her paternal grandfather was a farmer who rode in the Calgary Stampede. Her mother even ran for office as a New Democrat in 1988 in the riding of Edmonton-Strathcona.

And in a government that has no elected representatives in Alberta, Freeland is the most obvious choice to serve as its political minister, and its champion. Yes, they could appoint someone (or, perhaps, ask recent Senate appointee Paula Simons to take on the mantle for a while), but Freeland is a far better fit. She’s one of the government’s most influential voices, and as their lead in the recent NAFTA renegotiations, she’s someone who knows a thing or two about dealing with hostile political leaders.

That skill set is going to be needed, too. The premiers of both Alberta and Saskatchewan seem intent on continuing to stoke the separatist fires that are currently raging in their respective provinces, with Alberta’s Jason Kenney explicitly blaming Justin Trudeau for having set them in the first place. Never mind that Trudeau bought a pipeline, or made tax concessions that allowed LNG Canada (the biggest energy project in Canadian history) to begin construction. And never mind that it was Stephen Harper—not Justin Trudeau—who first mused about the need to “phase-out” the oil sands. For many Albertans right now, the federal government is the perfect target for the rage they’re feeling, and they have a premier who is more than happy to continue directing it Eastward.

That rage may not abate any time soon, regardless of what the federal government does. Yes, it’s supporting the construction of the Trans Mountain Pipeline expansion, which will help Alberta’s beleaguered energy sector. But that won’t increase global prices, and it won’t change the fact that global demand for fossil fuels may peak much sooner than anyone had predicted even a few years ago.

Alberta and Saskatchewan may want the federal government to “get out of the way,” as many Wexiteers like to say, by letting it do what it does best. But the problem is that what it does best may not be as essential to the global economy in 20 years as it is today, and there aren’t enough pipelines in the world to change that. And so, what Alberta and Saskatchewan need is someone with the courage and credibility to lead a conversation about what comes next for the West—about how it can prepare for the challenges and opportunities that lie ahead.

There might not be anybody in government today that’s better equipped to do that than Chrystia Freeland. As a former journalist, she knows how to communicate with people. As a student of the global economy, she understands the trends that are at work, and the pace at which they’ll unfold. And as an Albertan, she can empathize with the people who are being affected by it and speak to their experience in much the same way that Rachel Notley did when she was Alberta’s premier. It won’t be easy work, and it certainly won’t be pleasant. But if Freeland can contain the anger that’s spreading across the Prairies, she will have earned the respect of the rest of the country, and maybe the chance to lead it.