Could the coronavirus financial crisis lead to another populist storm?

Ken Boessenkool and Dan Robertson: The government says it will spend double on wage subsidies for businesses compared to individuals and families. In 2020, it's families that are "too big to fail." 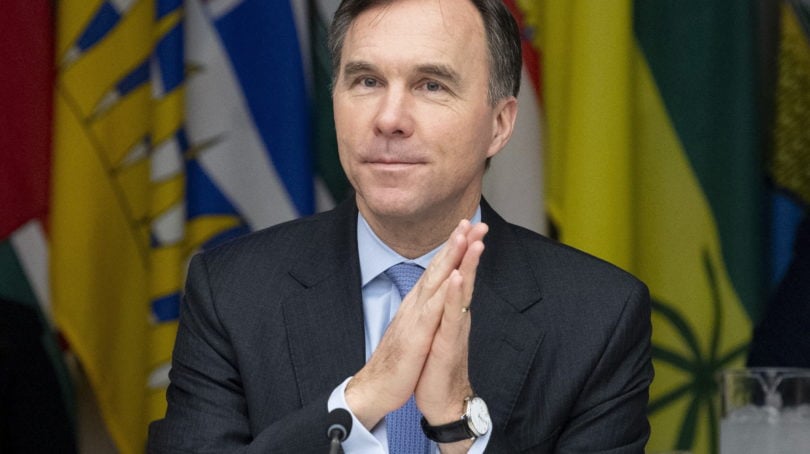 Minister of Finance Bill Morneau waits to begin a meeting with federal and provincial counterparts on Dec. 17, 2019 in Ottawa. (CP/Adrian Wyld)

The economic impact of financial crisis of 2008-2009 still reverberates. The most consequential result of the financial crisis, however, was not economic but political. People blamed the elites for causing the crisis in the first place. Their anger was compounded when those seen to be responsible for the crisis were considered “too big to fail” and received a bailout instead of the punishment many felt they deserved.

Big business and big financial institutions got help. The working and middle-class got Darwinian struggle. It propelled a tide of rightwing populism throughout the Western world. Across Europe, established centrist parties were swept aside. Prime ministers and presidents fell. In the United States, it fuelled Donald Trump’s hostile takeover of the Republican Party and ascendancy to the White House.

Canadians assume we are insulated from these forces. We are not. And if we’re not careful about how we respond to the economic consequences the COVID crisis, we could easily find ourselves swept up in the populist storm. The federal government has proposed a very substantial three-pronged response to replace some or all of working income that Canadians have lost due to coronavirus-imposed physical isolation.

First, Employment Insurance (EI), the program intended to catch temporary job loss pays up to $2,484 per month. Second, a new Canada Emergency Response Benefit (CERB) for anyone who doesn’t qualify for EI, will pay $2,000 per month. The government is forecasting $24 billion over three months and we can expect another $10 to $12 billion for Employment Insurance.

Third, a new Canada Emergency Wage Subsidy (CEWS) for any firm that sees a drop in sales of 30 per cent will pay up to $3,669 per month for each employee. If the government had limited this to firms with less than say, 100 employees, it would cover 6.5 million employees. But it didn’t, so the benefit will cover an additional 10.1 million employees. The federal government initially set aside $71 billion for this subsidy, but numerous amendments suggest that’s a lower bound.

Justin Trudeau has warned of “very stiff and severe” penalties for businesses that abuse this wage subsidy program. Yet firms exist to maximize income. If firms can find a way to qualify, they will find a way to qualify. Already Bay Street is offering webinars on how to take advantage.

MORE: What the Canada Emergency Wage Subsidy means for workers hurt by Covid-19

Does that matter? From an economic perspective, it really doesn’t. But if you are worried about this crisis driving a further rise in populism, it might matter a lot.

The 2008-2009 financial crisis triggered the populist surge that threatened 75 years of Western governing and economic consensus. Just imagine the political consequences of the COVID-19 crisis which is vastly more profound. It has created the perfect storm of fear, anger and anxiety which will propel populism at an even greater pace. “This particular crisis is perfectly designed for those who want to push back against the trends of globalization,” said Sean Speer, assistant professor in public policy at the University of Toronto’s Munk School of Global Affairs and Public Policy. He’s right.

With that it mind, do we really want to compound the challenges we will face after this crisis by directing a larger portion of our COVID-19 response defraying costs to businesses—including big business—than on direct benefits to individuals and families? Some might argue that there was no other way in the financial crisis. But that is not true today.

Here is a better way. A crisis basic income of $2,000 sent to every Canadian who filed an income tax form could function as an indirect wage subsidy. It could get us through the crisis by giving money to people, not business, avoiding the popular anger we saw 11 years ago. In devising emergency assistance policy, the Trudeau government must, of course, take economic factors into consideration. But it cannot ignore the social and political factors. In 2020, it’s families that are “too big to fail.”