COVID-19 in Canada: What will happen next?

Timothy Sly: We have to face the possibility that once coronavirus has spread within the community, the rate and scope of that spread is uncontrollable 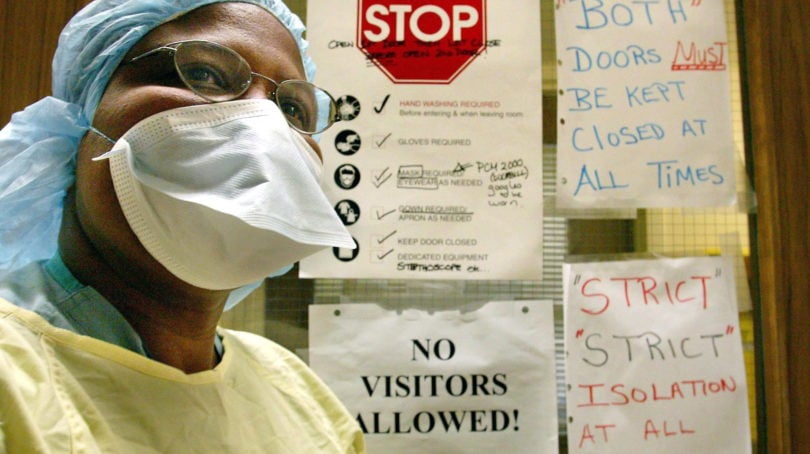 A nurse wears the protective clothing used when treating patients with atypical pneumonia (SARS) outside the door of a quarantined patient diagnosed with the illness in a ward at Sunnybrook and Women's Hospital in Toronto on Mar. 17, 2003. Ontario health officials say some front-line workers scarred by their experience with SARS are stepping up precautions against the novel coronavirus. (Kevin Frayer/CP)

“Why all the hysteria? It’s just another kind of flu!” I respond to a lot of questions on Quora, a global Q&A site, and lately, the doomsday believers are almost balanced by the naysayers. For a reality check about what to expect, let’s visit the local hospital.

The emergency reception area is a potential hot-spot for transmission to whoever accompanies those staggering in the sliding doors; medical and nursing staff, other patients and family members accompanying them, as well as cleaners, paramedics, and volunteers—sometimes up to 100 people—are vulnerable. And though they may not appreciate it, the triage nurse, the first person encountered by the incoming patient, holds an important key to preventing transmission of any stray virus by carefully asking about recent travel and current symptoms, and acting accordingly.

The entire hospital, in fact, functions on a just-in-time basis with little reserve in human resources. If a nurse from a pediatric surgical ward, or a microbiology laboratory technician is unwell for a day or two, others will close ranks, fill the gap, and operations will usually continue seamlessly. Even yearly seasonal flu can present serious challenges, largely because Canada has been facing a growing nursing shortage for years, and we may be in need of 60,000 full-time RNs by next year, according to the Canadian Nurses Association. More than a handful of back-up staff at times of need are simply not available.

MORE: Coronavirus latest news: The outbreak is now a pandemic, declares the WHO

A large hospital may have 1,000 nursing staff. Now consider, hypothetically, the prospect of 300 (30 per cent) of the nursing staff unable to come into work due to an outbreak of acute viral respiratory sickness, and another 100 (10 per cent) who are staying home because they are quarantined due to being contacts of family members who are ill, all during a one-month period at the peak of the outbreak. Anything even remotely resembling “normal” will be a distant memory, with 40 per cent of staff missing. Wards, units and entire departments may have to close.

It gets worse. On a daily basis, a formidable surge of anxious citizens will be heading toward the hospital with sick family members in tow. With a possible incidence rate in the community of at least 30 per cent (possibly much more), worried crowds will be lined up outside the ER entrance, banging on the door, trying to find someone to attend to their elderly family members who are already turning slightly blue as their cough becomes worse and pneumonia sets in.

Planning for such eventualities in the long-term, we must consider that at least one per cent of those who were sick will not survive, meaning that 30 permanent positions will be posted in the staff-wanted section not just for this hospital but for all such similar-sized hospitals in the region, the province and the country.

Far-fetched? Far from it. This is exactly what happened in October-November of 1918 in the U.S.A., U.K., Canada, Sweden, France, Germany, Belgium, and every other country affected by the Spanish flu. No one today has a first-person memory of such scenes, and few photographers and filmmakers were able to capture the desperation. But authors were making notes, and if they survived, they wrote about it in great detail.

So, what is likely to take place during the next few weeks?

Harvard epidemiology professor Marc Lipsitch predicts that within the coming year, 40 to 70 per cent of the global population will become infected by the virus that causes COVID-19. This does not mean that everyone will be experiencing severe illness. Most, probably a far greater proportion that we currently estimate, will experience moderate, mild, or even asymptomatic infections. Somewhere between one and two per cent of those infections will be fatal, with the predominance being among the elderly and those with underlying pathologies such as chronic cardiovascular, respiratory and hypertensive conditions. But just as with influenza, most cases will resolve without medical care.

MORE: As coronavirus spreads, Americans need a leader who soothes and unites. Instead, they have Trump.

Although certain aspects of COVID-19 are comparable to the Spanish flu pandemic, the current virus has some especially worrisome characteristics: the longer incubation time (two to 11 days, but mostly between five and seven days) allows longer period of communicability; the apparent ability of the virus to be shed from a mild or asymptomatic person for longer periods; the period from illness to death being three weeks; a reproductive number (Ro) of around two; and a case-fatality rate assuming at least one per cent. If we put these factors together, we have to face the possibility that once community spread has begun, the rate and scope of that spread will be quickly uncontrollable.

Here’s the analysis, perfectly described by Adam Kucharski, associate professor in epidemiology at the London School of Hygiene and Tropical Medicine: “Assume we have just found the first death from a case that was unrelated to travel or any other case. That means they were probably infected three weeks ago along with another 100 people who did not become fatalities. But each of those 100 people have been infecting up to two others (doubling each week), with the inevitable conclusion that aside from the one observed death, we may have as many as 800 active cases we don’t know about walking around, spreading virus.”

Initial containment is therefore extremely important, and worth every effort. Once the genie is out of pandora’s box, there’s not much that can be done, other than keeping individual distance and hand sanitation. No time for hysteria, just hygiene.