Dear Mama: 'You were a superhero in my young mind'

Deidre Olsen: 'I was only three when my 17-year-old babysitter sexually assaulted me...You pursued justice during a time when criminal charges for sexual assault were scarce. Justice did not prevail, but you did, and I love you for it.' 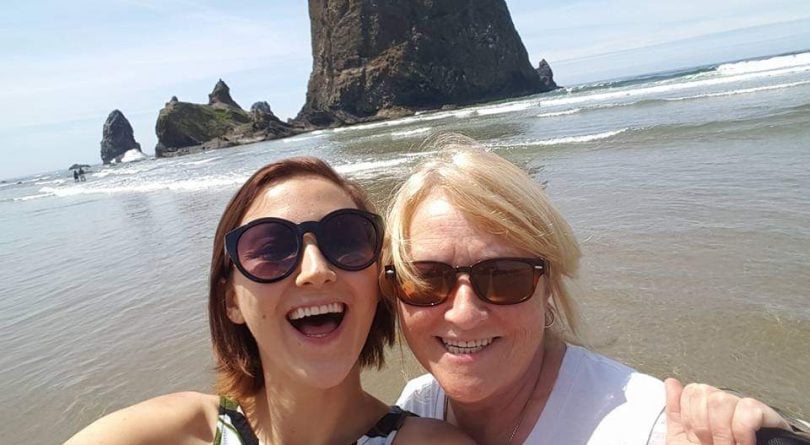 It’s difficult to imagine myself as you once knew me—three years old, bright-eyed and playful. But I sing lullabies and cry for that little girl, too. I protect and take care of her, and I do so fearlessly, just like you did. I know you had hoped that child wouldn’t share your fate and grow up with the same pain, but forces beyond you had other plans.

Our family had left the Lower Mainland of British Columbia and headed north in search of work. On our journey, we lived on each end of the Highway of Tears, from Prince Rupert to Prince George. I remember our house—3112 Spruce Street. The sandbox I played in was right by the raspberry bushes that lined our backyard. It attracted hungry bears. I recall you squeezing me tightly after a ranger shot one that wouldn’t leave. You let me reach out my tiny hand and touch its sparse brown fur.

You were relentlessly hard-working. Sometimes you’d be away for days at a time on long-haul trips as a locomotive conductor for the Canadian National Railway company. But you’d always come back. I remember you in your worn-in denim overalls, kicking the snow off your boots at the front door. I’d run to you, and you’d pick me up and hold me tight. You were a superhero in my young mind.

READ: ‘I try not to spend too much time regretting the years we were not in touch’

We would sit in the bathtub together, and toys floated on the warm water like boats on the open sea. One time, we both screamed when a black wolf spider crawled out of the faucet. You whipped me into your arms and carried me out of harm’s way.

Then a real monster ended up inside our home. I didn’t know how to put what happened to me into words. I was only three when my 17-year-old babysitter sexually assaulted me.

Now I think of you, the young mother, who was pregnant with her third child. I admire your bravery as you took care of me and my one-year-old brother while going to meetings with doctors, lawyers and the police. You were our rock. You kept a strenuous job while attending to the needs of three children. It’s difficult for me to imagine doing the same, as you were only a few years older than I am now.

READ: A widowed mother to her son: ‘Your small life was so powerful, it saved mine’

I’d tried for so long to bury the pain deep inside me but I couldn’t hold up the dam any longer. I was in my early 20s and still living with you in Ladner, B.C., when we finally spoke about what happened—we were drinking red wine in the living room. After a few glasses, the questions I’d been desperate to ask you began spilling out. I watched as your deep pain ruptured to the surface of your skin. Your green eyes welled up with tears and your face formed a tight frown. You fought through choked sobs, pausing for a moment to catch your breath.

You told me what you could remember. I learned that you are also a victim of child sexual abuse. I can only imagine the pain you must have felt, knowing that someone you trusted preyed on me.

You were unable to tell me everything I wanted to know. But I don’t blame you for trying to forget. It felt good to speak frankly about what happened. The conversation meant we could move forward—it was cathartic. Instead of living with a painful secret, we could now live in truth. I want you to know that no matter how much guilt you’ve carried with you, Mama, it’s not your fault.

On countless nights, I cried. I cried for you and all the little girls who had their agency stolen from them. You pursued justice during a time when criminal charges for sexual assault were scarce. Justice did not prevail, but you did, and I love you for it.

Earlier this year, I found a brown envelope in my mailbox. Inside was a CD from the RCMP that had arrived after a seven-month wait. I immediately headed to the Runnymede library in Toronto and saved the 72-page-long PDF to my Google drive. Records obtained through a freedom-of-information request can fill in the blanks that memory and trauma sometimes can’t.

Over the phone, I told you that a social worker had written, “Roberta is acting very appropriately” in underlined, capital letters. You sobbed, feeling reassured. Until that day, you weren’t sure that you had done the right things. I promise, you did everything right.

I’m 28 now. You still live in British Columbia, and I live in Ontario. While there are 4,300 km between us, we are closer than ever. We speak nearly every day, and nothing is left unspoken. In the past, we lived with lumps in our throats, unable to express the sadness we carried with us. But today, those words flow freely. Thank you, Mama, for always being there for me.

This essay appears in print in the February 2020 issue of Maclean’s magazine with the headline, “Dear Mama…” Subscribe to the monthly print magazine here.

FILED UNDER: Before you go Editor's Picks motherhood sexual assault and harassment