Michael Coren: The U.S. president's demand that churches reopen is an attempt to exploit a uniquely American view of Christianity 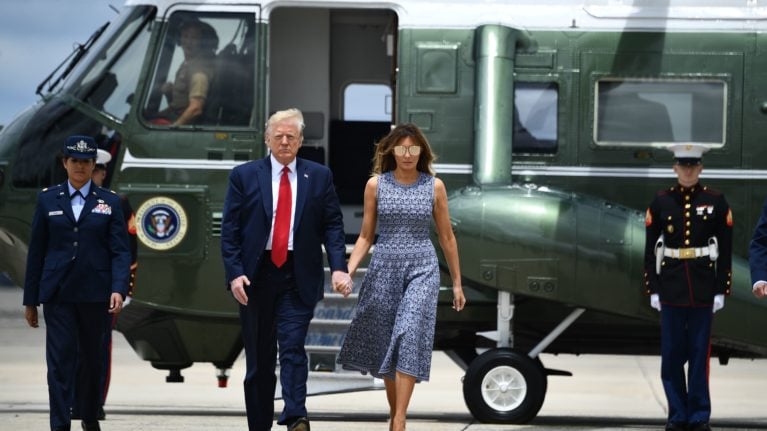 Trump and Melania Trump walk to Air Force One at Andrews Air Force Base on May 27, 2020 (BRENDAN SMIALOWSKI/AFP via Getty Images)

At the end of last week U.S. President Donald Trump followed through on a long-standing threat and called on, “governors to allow our churches and places of worship to open right now”. He continued, “These are places that hold our society together and keep our people united. The people are demanding to go to church and synagogue and to their mosque.”

Actually, that’s not true. There have been very few calls from the Jewish and Muslim communities for venues to be reopened, and the vast majority of Christian denominational leaders have supported church closures and even locked them in an attempt to halt the spread of coronavirus.

There have been some exceptions within mainstream churches, such as Catholic Archbishop Bernard Hebda in Minnesota, but for the most part the churches and pastors demanding reopening—and often questioning scientific evidence around the virus—are on the hard right of the evangelical movement.

Trump went even further, arguing that, “The governors need to do the right thing and allow these very important, essential places of faith to open right now, for this weekend. If they don’t do it, I will override the governors” when in fact the president doesn’t have the constitutional authority to do so. Attorney General William Barr then said, quite disgracefully, that, “I think the intransigence on this makes me feel that undergirding some of this is really animus against religion,” with Trump adding: “Some of these Democrat governors, they’d be happy if you never opened again.”

The truth is that a number of these Democrat governors are actually devout Christians and weekly church attendees, many of them intimately active in their congregations. But in a darkly clever move, Trump and his people have depicted Democrats and liberals as being opposed to faith. Freedom of religion, along with gun rights, is part of the U.S. conservative and even greater American DNA, so these men and women are damned if they do, damned if they don’t. As opposed to Donald Trump, who is just damned.

The other approach from the White House is to draw an utterly insidious juxtaposition with services considered essential. “Some governors have deemed abortion clinics as essential,” Trump said. “It’s not right. So I’m correcting this injustice and calling houses of worship essential.” Thing is, whatever one’s view on abortion, as a medical procedure with an obvious time limit it is indeed essential, but in making this pairing the president is quoting directly from the anti-abortion and conservative movement’s playbook.

Most Christian denominations recommend but don’t insist on weekly church attendance, and those that do—Roman Catholicism being the most prominent—have responsibly and wisely ruled that receiving the Eucharist each week is suspended while health and safety are under threat.

Churches have provided on-line services and meetings, and on a personal level my own church—St. Cuthbert’s Anglican in Oakville, Ont., where I am Deacon Assistant—has increased attendance by Zoom for Bible Study and Morning Prayer by more than 120 per cent, and weekly services even more so. Nobody would argue that this replaces what was, but places of worship across the world have acted quickly, constructively and empathetically to provide worship, fellowship and support.

Trump’s motives seem obvious. He is reminding the 81 per cent of white evangelicals—and many conservative Catholics—who voted for him, and who are so enormously influential in the Republican Party, that he is their friend and supporter. The authentic Christian response during a health and human crisis, however, is to care for the poor, sick and marginalized, and to work to promote justice and peace. Open churches are important but secondary, and often a downright digression.

Whether this U.S. model could even happen in Canada is a fascinating point to consider. It won’t under Justin Trudeau of course, but would also be extremely unlikely with any other prime minister, whatever the party. Canadian Evangelicals are much fewer and not quite as conservative as their southern brethren, and Canadian Catholics—though numbering more than 40 per cent of the population—haven’t voted as a bloc in generations.

But there’s something more profound than this. The great Oxford historian, and I should say a friend, Sir Diarmaid MacCulloch has written about how the Protestant Reformation had come to a virtual halt in Europe by the late 17th-century. It had lost France and the parts of Eastern Europe, where it had once seemed to be developing, was under siege elsewhere, and beyond Britain, Northern Germany, and Scandinavia was dormant. It was America, what would become the United States, where the Reformation was born again, if you’ll excuse the pun.

It was America, the land of the Protestant immigrant, that became a superpower, a Protestant superpower, allowing and encouraging the same fierce, compelling voices and ideas of the roaring reformers to take hold and dominate. Canada was divided, a product of compromising Anglicanism, French Catholicism, and a Scots and Irish Presbyterianism more interested in confirming its own position than promoting any form of reformation.

This, then, is the bible belt of the U.S., this is the evangelical imperative, this is the Godly city built on the hill, this is God Bless America, and this is the culture that Donald Trump—clearly not a man of any noticeable faith—has discovered how to exploit. The less callow of his supporters know he’s insincere but they think of the flawed Emperor Constantine who empowered Christianity, or the Persian king of 2,500 years ago, Cyrus the Great, who allowed the Jewish people to return to Jerusalem. This may all sound laughable, but spend any time on Christian conservative websites and magazines and you’ll realize how deep the malaise goes.

So, a few churches will open, a few Governors will be humiliated, people will die, and Donald Trump’s popularity in the quarters he cares about will increase. God, in every sense, help us.