Earth to Trudeau: lead by example

Andrew MacDougall: The PM needs Canadians to believe in his climate plan. Not regularly jetting across the continent on holidays might put him in a better position. 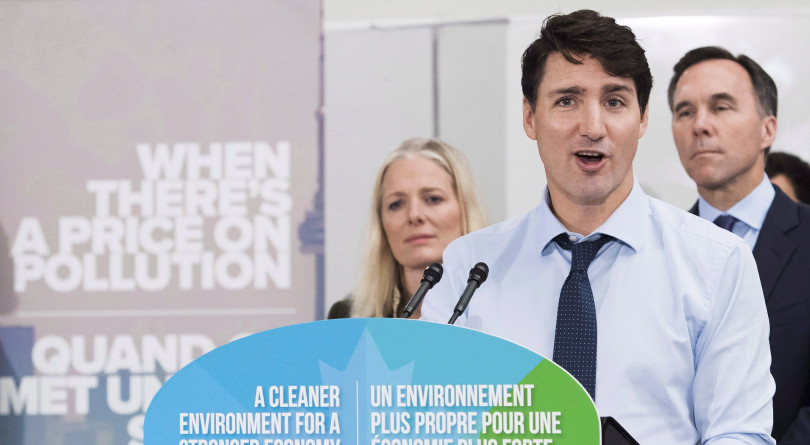 Trudeau speaks to the media and students at Humber College regarding his government's carbon tax in Toronto on Tuesday, Oct. 23, 2018. (THE CANADIAN PRESS/Nathan Denette)

Justin Trudeau took to the water this week to celebrate Earth Day, surfing with his family in Tofino on Canada’s far left coast. The waves were part of a three-day B.C. Easter break for the Prime Minister, a reprieve from Ottawa’s stormier climes.

The familial hang ten capped a long weekend that began in Hamilton and Toronto, where the Prime Minister attended Good Friday and Passover events, respectively. The religious events were themselves the cap to a busy week that saw Trudeau ping from Vancouver (Vaisakhi parade) to Ottawa (private meetings) to Kitchener-Waterloo (government announcement) to Ottawa (government photo op) to the GTA before jetting back out to Tofino to surf.

It is with this carbon footprint in mind that we should read Trudeau’s Earth Day plea.

“Climate change is already affecting us here at home,” Trudeau wrote. “Canada’s North is heating up at three times the global average. Glaciers are shrinking. Sea levels are rising. Our oceans are warming and acidifying as they trap carbon dioxide. Floods, fires, heat waves, tornadoes—extreme weather phenomena are becoming more intense and more frequent, threatening communities across the country.”

READ MORE: Trudeau and Kenney: Well, this was coming

The Prime Minister then largely repeated his words during a visit to flood-impacted communities in Quebec, which he reached following a brief stopover in Saskatchewan for “private meetings”. After sandbagging Gatineau Trudeau then left for Montreal for an environmental conference.

Whatever your position on climate change—and I am someone who believes we need to act using a carbon tax among other policy responses—we can all agree the Prime Minister is exacerbating the problem he seeks to solve. If everyone jetted around like Trudeau the earth would be toast in record time.

Yes, the Prime Minister deserves time with his family. That’s not the point. We all do. But it doesn’t mean we have to be carbon pigs doing it. If Trudeau can fly all the way across the country for a few days of rest and relaxation then the ordinary Canadians who the Prime Minister is trying to convince to limit their carbon footprints can go to the Caribbean (or points further) for the same.

What climate gospel can Trudeau possibly preach when he took the Challenger jet back and forth to Florida on vacation twice in one week?

And yes, the Prime Minister needs to meet with Canadians. That’s the reality of the job. But what do you then say to the truck drivers or taxi drivers who also have a carbon-intensive reality? Or the business people who have to shuttle between their markets? Or do we just expect that someone else will make the needed reductions?

Indeed, this is the climate debate in a nutshell; people are all for doing something until they have to do something. The Extinction Rebellion protestors who have been messing up my public transport here in London, U.K., over the past few weeks want a zero-carbon reality by 2025. Left unsaid is just what would have to be done to achieve that reality.

So much of the debate on climate in Canada is about leading by example. The federal carbon tax won’t get the planet to its emissions targets by 2050 but at least it’s a step in the right direction. But is it not right, then, for Trudeau to lead by example and not use the gas-guzzling Challenger jet as his personal limo whenever he needs a bit of sun or fun? It’s not quite “Al Gore heating his 20-room mansion” territory, but it’s close.

You might think Stephen Harper a climate villain, but at least he didn’t regularly light gas tanks on fire going on holiday. Other than a yearly weekend sojourn to New York City to see some plays or watch some tennis or baseball with his kids, the former prime minister never left the country on his personal trips, either retreating to Harrington Lake (a 25-minute drive from his office) or back to Calgary for his rest. Trudeau’s travel habits make Harper look like David Suzuki.

But here’s the thing: you can’t imagine that Justin Trudeau. Because he doesn’t exist. This Prime Minister likes to say the right thing, not do the right thing.

This is a Prime Minister who will tell you the woman should always be believed—and act on it—until a woman says he’s done the wrong thing. And then it’s all about her experiencing things differently.

This is a Prime Minister who will fly down to NYC to receive an honorary degree from NYU, use the occasion to tell the kids they need to embrace intellectual diversity, without ever demonstrating any ability to heed his own advice.

This is a Prime Minister who will promise to change the way elections are done in Canada to better reflect Canadians’ views, and then abandon it because his un-preferred version would destabilize Canada.

This is the feminist Prime Minister who promised to do politics differently who kicked two of his female ministers out of his caucus for having the courage to call him out for doing politics the same way it’s always been done on SNC-Lavalin.

And so why should Canadians do anything Trudeau asks of them on the environment if he’s not going to lead by example? “Climate change is bigger than any one of us,” Trudeau wrote in his Earth Day statement. “We only have one Earth, and that’s what’s on the line. Our environment is our future. We’re going to fight for it, for all of us.”

All of us, except Justin Trudeau, apparently.