Michael Coren: The statue of the British slave trader was dumped into ocean. More importantly, the fight for equality and decency pushes ahead. 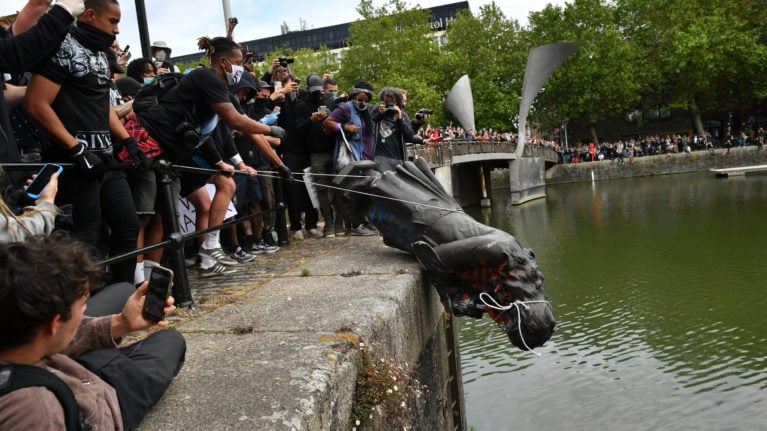 Bristol, Liverpool and London were the three main slave ports of Britain in the 18th and early 19th century. It was an inconceivably lucrative business, and financial failure was virtually impossible. Ships sailed off to Africa, loaded up on human cargo, exchanged men, women and children in the West Indies for sugar or in America for cash and goods, and then returned home to sell what they had. Countless people made fortunes, and if slaves died on the voyage—and many did—there were plenty more to steal. And rape, beat and torture.

One of those profiteers was Bristol’s Edward Colston, who in the late 1600s as a prominent member of the Royal African Company transported more than 80,000 people, making what today would be tens if not hundreds of millions of dollars. He was also a moneylender. When he died in 1721 he left a substantial amount to local charities, perhaps out of a guilty conscience. There were oceans of blood on his hands.

It was the statue of this man that was torn down and thrown into the harbour last week in Bristol, and became a pulsating image throughout the world as those protesting against racial inequality had their long overdue say. Ten thousand people demonstrated in the western city of Bristol in a peaceful show of defiance, and when they disposed of the repugnant Colston the local police not only refused to intervene but also explained that they understood.

What hasn’t been emphasized is that the statue itself was not some city tribute placed by the man’s friends and colleagues but a political statement made by a single politician in 1895, more than 250 years after the slaver’s birth. Rather like those endless memorials to Confederate generals in the southern states, this wasn’t a contemporaneous tribute but an anachronistic message. There has been local criticism for years now, and a plaque outlining how the man had made his money was supposed to be added some time ago; it was delayed by disagreement over the precise wording!

So good riddance to the swine, and into the water he goes. Just a cold, stone representation of course, unlike the warm, breathing, living bodies of myriad Africans whose stories will never be told.

Naturally, the incident led to many conservative voices claiming that this was mob rule, and that we couldn’t judge the past by modern values. Which is a troubling argument in that Nazi leaders claimed at the Nuremberg trials that the genocide they initiated had legal and government support at the time, and they were being held to outside and later standards. Also, even at its height slavery was always condemned by courageous individuals and movements, and by the time the statue was erected had been criminalized in Britain for 70 years.

There is, of course, plenty of room for compromise and pragmatism. Few are the heroic and famous of the past who are completely spotless in character. Thus the dispute over the graffiti daubed on the statue of Winston Churchill in the centre of London, at the same time as the Bristol incident. As an Englishman born in 1959, I have a visceral attachment to the wartime Prime Minister, less because of who he was than what he symbolized. Here was the personification of a dogged resistance to Nazi atrocities. My dad and grandpa were in the British forces, and I was raised on tales of our brave and besieged island standing up to the foreign bully. Not entirely authentic but not without historical veracity either. But Winston was also an old racist, especially when it came to India, and we need to accept it. The statue should certainly remain, but a bit of scribbling, since mostly removed, is hardly a sin roaring out for vengeance.

Yards away from the Churchill statue is a huge monument to the Puritan soldier and politician Oliver Cromwell, who in the 17th-century defended the rights of parliament, until he himself became dictatorial. He also ravaged Ireland and treated local Catholics appallingly. All over the country in fact, there are reminders of historic and sometimes quite recent brutality, and some of them should and perhaps will disappear. A consensus of common sense often guides us in the more ambiguous examples but sometimes the cases are so ugly as to demand a response. In Canada, for example, debate continues about how and even whether we should remove statues of John A. Macdonald. The former Prime Minister was certainly a vital part of the country’s modern foundation but he also advocated policies towards Indigenous people that bordered on the genocidal.

This all matters, but there is a deeper, greater point. These are inanimate objects, mere lifeless husks. They have some significance in what they recall and because of that they can hurt, but they do not have blood, heart and mind. Unlike the men and women of colour shot, strangled and choked by the police, not like George Floyd whose murder was the final spark that ignited the metaphorical fires raging across the world. If the outrage at the statue bashing would have been evident in years past due to racism and brutality, we wouldn’t be in this situation.

The iconoclasm we’re witnessing is a result and not a cause, a symptom of an inexorable agony and a cry for decency and equality. Nobody will miss Edward Colston, few had even heard of him, and Winston Churchill and his reputation will survive. The question is, will human dignity finally triumph.