Governments are increasingly turning to retired judges for help. Is that a bad thing?

Our editorial: It often looks like an attempt to catch a break from constant, and often richly earned, accusations of mismanagement 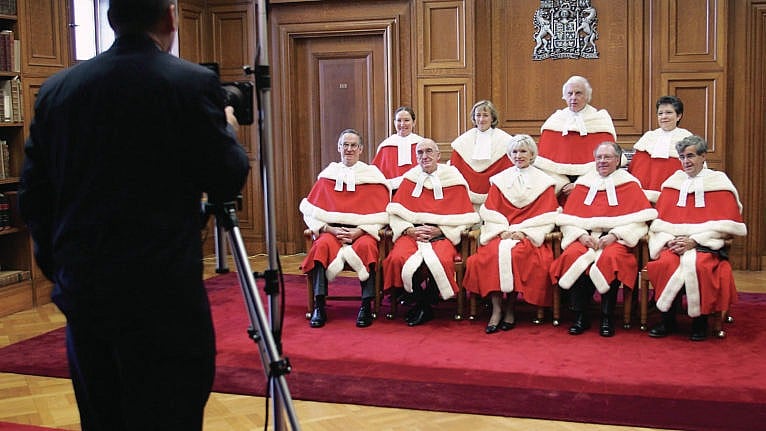 Posing for an official Supreme Court photo (Abella in back row, far left) in 2004 (Jonathan Hayward/CP)

Rosalie Abella didn’t shy away from many hard questions during the extraordinary exit interview she gave Maclean’s this month. The longest-serving justice on the Supreme Court of Canada, who retires July 1, has never been a shrinking violet. But Abella did demur when asked about a trend in governance: governments’ eagerness to turn to retired Supreme Court justices, and retired judges from other courts, to solve what are essentially administrative or political problems. Given her frankness on other issues, she’s earned her reticence on this one. But we have some thoughts.

Post-retirement work for the judicial set is a topic that comes up often these days. Abella has had 18 different colleagues during her nearly 17 years on the top court. Many have been pressed back into service for post-retirement work. Michel Bastarache reported on the RCMP’s toxic culture. An astonishing array of retired Supremes converged on the 2019 SNC-Lavalin affair. Thomas Cromwell advised Jody Wilson-Raybould. Frank Iacobucci worked for the engineering firm. Most damaging, at the height of its dispute with its own Attorney General, the Prime Minister’s Office proposed to seek advice from “someone like Beverley McLachlin” to bolster its opinion about how she should exercise her discretion. As though a freshly retired chief justice were a short-order cook.

And then there is the seemingly endless procession of retired justices who are called in to fix the Department of National Defence and the Canadian Armed Forces. On June 1, Morris Fish released a report on the military justice system, which largely insisted the federal government implement a 2015 report from Fish’s former colleague Marie Deschamps. Louise Arbour’s report is next. Fish’s report mentions a 1997 report on military justice from the late Brian Dickson. Antonio Lamer delivered an independent review of the National Defence Act in 2003. If superannuated former judges were what it took to fix the military, Canada’s would be blinding in its glorious perfection.

What’s the problem? Some people worry that the prospect of work after retirement might colour a judge’s opinions before retirement. Frankly, this does not seem like a big risk. Whatever blemishes there may be on the Supreme Court of Canada’s reputation, they don’t seem to have been caused by anyone’s post-retirement gigs. And since it’s not uncommon for justices to retire well before the age limit of 75, it’s reasonable to expect they’ll do something later in life.

No, the problem seems, increasingly, to be on the demand side. When companies and interest groups hire a retired Supreme, it can look like an attempt to bolster their credibility in a frankly commercial dispute. When governments do it, it often looks like an attempt to catch a break from constant, and often richly earned, accusations of mismanagement.

What a retired judge can’t do, by herself, is solve a problem. Ermine-adjacent consultants have a rich history of analyzing complex decisions, but when they wore the robes they were making those analyses in a specific context. The most important part of that context was that their decisions carried the force of law. Now they really don’t. It falls to governments to act, and bureaucracies to implement. If they don’t, then a quick look-in by a certified Great Canadian won’t have helped. We’ve already seen this most spectacularly with the 2015 Deschamps report, which was barely implemented. Perhaps Arbour’s follow-up report should be limited to two words: “Try again.”

Increasing resort to government-by-retired-justice exacerbates a bunch of things that ail our democracy. A preference for marketing over sustained action. A growing estrangement between partisan political staff and the permanent public service, which leads governments to ask outsiders for advice they could get from experts inside departments. The collapse of attention spans. But back to Abella: her influence over her 45-year judicial career was cumulative, and it was based on sticking to her work. More people everywhere should follow that example.

This editorial appears in print in the July 2021 issue of Maclean’s magazine with the headline, “Ermine adjacency.” Subscribe to the monthly print magazine here.