How far will Trump go against Canada? Just watch him.

Evan Solomon: The Quebec summit was a disaster and the irrational Trump now sees a trade war with Canada as not only a political win but a personal one. 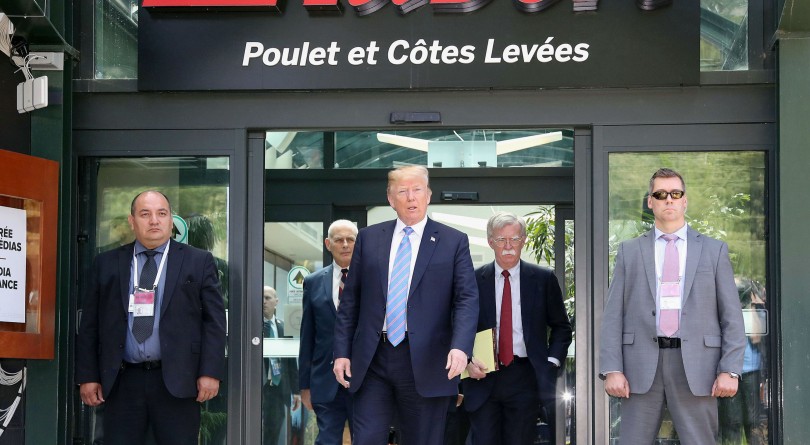 U.S. President Donald Trump leaves the venue of the Group of Seven economies summit in Charlevoix, Que., on June 9, 2018. (Photo by Kyodo News via Getty Images)

These are now the most dangerous days of the Trudeau era. An escalating trade war with the United States has turned into a deeply personal showdown between the leaders, and now Donald Trump is threatening to hit Canada with a 25 per cent tariff on Canadian autos.

“That would be close to an existential threat to our economy,“ a senior Liberal source involved in the trade negotiations told me. How fast could that happen? “The U.S. could push them through as early as July.”

I was stunned by that. While polls show  Canadians support the Prime Minister’s attitude that Canada will not be pushed around—we should not be—just let that sink in. By July the U.S. could send our economy into spasms. How far will Trump go? Just watch him.

If the main mission of the G7 Summit was to de-escalate trade tensions with the U.S., the mission failed spectacularly. The fundamental goal was to get Trump to back off his steel and aluminum tariffs before July 1, when Canada’s retaliatory tariffs kick in. That was the smart buffer zone Canada put in, giving Trump time to change his mind, as he had done on so many other issues like the meeting with North Korean Leader Kim Jong Un. But the G7 ended that hope.

The summit can now only be described as a disaster. When Trump jetted off early to meet with Kim, his Twitter contrails slashed the political sky. “PM Justin Trudeau of Canada acted so meek and mild during our @g7 meetings only to give a news conference after I left saying that, “US Tariffs were kind of insulting” and he “will not be pushed around.” Very dishonest & weak.”  Dishonest. Meek. Mild. Weak. The Trudeau-Trump bromance is dead. But what followed was significantly more ominous.

“Based on Justin’s false statements at his news conference, and the fact that Canada is charging massive Tariffs to our U.S. farmers, workers and companies,” Trump tweeted. “I have instructed our U.S. Reps not to endorse the Communique as we look at Tariffs on automobiles flooding the U.S. Market!”

That is the sound of the economic bomb dropping. And if anyone thought this was just another Trump eruption, he sent out his consiglieres to double down.

Trump’s chief economic advisor Larry Kudlow was on CNN on Sunday calling Trudeau a backstabber and referring to Canada’s threat to retaliate as a “betrayal.” He went on to make the case that Trudeau had made Trump look “weak” before the important meeting with Kim Jong Un, and that was un acceptable. Oh, the shame.

READ MORE: The G7 question: How do we America-proof the West?

That these arguments make no rational sense—Trudeau had literally repeated what he had said about tariffs for weeks—or that the president changed his rationale for the steel and aluminum tariffs from a security threat to a response to Canada’s supply management system that does, it’s true, protect Quebec and Ontario dairy farmers, is beside the point. This is not a rational policy problem anymore, but an emotional psychological one. And Canada has failed to understand what to do about it.

To be fair, this is the not Prime Minister Trudeau’s fault. The U.S. has slapped tariffs on the EU, China and Mexico, so no one has succeeded in the Taming of the Trump. Trudeau has put together an excellent team of advisors, which includes conservatives like Rona Ambrose, Brian Mulroney, Derek Burney and James Moore.

How the now critical conservatives like Andrew Scheer blame Trudeau for this mess is a mystery. What were the options? Scheer may be doing his job as opposition leader, but when people like Jason Kenney are openly supporting Trudeau’s position Scheer suddenly looks wildly off side on this. Unless Scheer has a better plan, what is the upside of his critique outside of scoring a few political points?

This is and has always been about one man: Donald Trump. He is what he always said he was: an American first, protectionist. But that’s like describing a piece of meat before it’s been marinated, spiced and cooked. It misses all the Trump flavours that are infused by pride, ego, and his emotional, impulsive behavior. It misses the non-rational side of him, which is in ascendance.

This may be the mistake that Trudeau—and everyone else—has made with Trump. Trudeau’s team has been deploying game theory with Trump to try to argue the logic that in a trade war both sides lose. If you do that, we do this and then this happens. But you cannot use game theory with a non-rational actor. It doesn’t work.

There may well be other ways to strategically deal with Trump. The theoretical way, following the game theory logic,  is called “backwards induction,” which attempts to assume what the last move in a game a non-rational player would make, on the assumption that the move would try to maximize that player’s benefit. Again, sounds decent, but Trump has proven time and again that even here, maximum benefit doesn’t describe his choices. Who benefits? America?  Him? Someone else?

The whole Russia investigation, whatever you think of it, is predicated on the question of why Trump makes choices and who is the true beneficiary. Why, for example, did he insist that Russia rejoin the G7, and willfully miscast or ignore the annexation of Crimea? No wonder Western leaders are openly contemplating a world order without American leadership, asking if the post war period of trade and security, where the U.S. has been the guarantor and the alliance leader, is ending? What was once the new world is now the old world, but no one knows what the new, new world will look.

The great hope is that America has enough ballast to withstand the current Trump tilt, and will re-assert its conventional role of supporting international security and trade norms, not undermining it. After all, the fundamental Soviet/Russian strategic goal for 70 years has been to drive a wedge between the U.S. and Europe and suddenly, in 2018, that’s working.

As the former FBI director James Comey told me recently when I interviewed him at a Canada 2020 conference, the world has become more dangerous with Donald Trump in charge. Maybe those around the president, like Defense Secretary James Mattis, who is a patriot not an enabler, will act as sober second thought to the impulse behavior on the world stage, but for now, no one can say for sure.

The question for Canada is, what’s next? Foreign Affairs Minister Chrystia Freeland has told me that Canada has a plan C and D if the tariffs escalate, even if they hit the auto sector. That’s smart, but it is also the worst case scenario. The best case is to somehow stop the fight and so far that appears impossible.

How desperate are things? Some sources say that if Trump gets a win on the North Korea file, he will back off on Canada. But hanging our hopes on two nuclear hot heads coming to a quick deal is unicorn territory. Stopping a trade war is now the singular most important policy facing this government and the truth is, there is simply strategy that can do that.

Worse still, Trump has no reason to back down. His economy is roaring. Unemployment is low. And there is no political upside for any politician in the U.S. to campaign on deals like NAFTA, even if privately they believe it is beneficial. Free trade with Canada has no political allies in the U.S. of any consequence. So behind closed doors the Michigan auto industry may push back, as do many governors and Congressional leaders, but Trump doesn’t seem to care. This is now not only a political win for him, it has become a personal vendetta.

For over 500 days Justin Trudeau was praised for his patient Trump strategy. It appeared to be working. Not anymore.

This is phase two and the strategy has to change. Waiting out Trump’s moods hasn’t worked so far. Does the Canadian government have to give up supply management to give Trump a win? That would be politically poisonous in Quebec and Ontario and expensive to boot, but it may happen.

Still, will that assuage the Trump appetite? Is that a form of trade appeasement? First dairy, then autos, then what? Banking? Telecom? The Trump whisperer has got to find a new message fast or Trump will hit again. Just watch him.