'I feel ineffably sad... it's so clear how much they hate Black people'

BLM-Canada co-founder Sandy Hudson on the riots at the U.S. Capitol and how anti-Black hatred has been permitted to grow in political strength without consequence 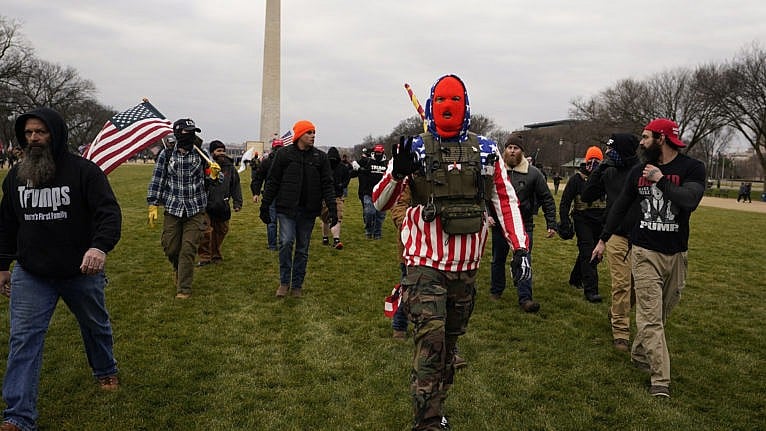 People march with those who claim they are members of the Proud Boys as they attend a rally in Washington, Wednesday, Jan. 6, 2021, in support of President Donald Trump. (AP Photo/Carolyn Kaster)

It’s Mon., Jan. 11. Last week, a violent mob of white supremacists stormed the United States Capitol building. A few days ago, Facebook and Instagram announced that President Donald Trump was banned from using their platforms indefinitely, after initially announcing that he would be banned until after the inauguration of President-Elect Joe Biden. Twitter announced that Trump would be permanently banned from its platform, after initially banning him for a 24-hour period. Yesterday, Amazon kicked Parler, the Twitter-style platform popular amongst the white supremacist right, off its servers, forcing it offline. Today, it was announced that two Capitol police officers were suspended in connection with the storming of the Capitol.

The news is moving so quickly, I feel I need to let you know exactly from when I write. It feels simultaneously like this week has been a month long, and also as though we never truly exited 2020.

And I feel ineffably sad.

The type of advocacy work I’ve chosen to do means that when difficult situations happen that have deep connections to the racism and white supremacy in our society, I get to work. I write, I speak, I prepare others and try to give people tools that will help them critically understand how to think about the event.

I found that very difficult this week.

I want to remind you where we were at the beginning of last week. There was a stunning electoral upset, in which the Democrats won both United States’ senate seats in Georgia for the first time in 20 years. This was an incredibly important runoff election; its results mean that the Democrats have a one-vote senate majority, and will control the legislative and executive branches of government. The result will send the first Black senator from a Southern state and 11th Black senator in the history of the United States to Washington. The victory was due to the incredible organizing work of the Black community in Georgia.

RELATED: Accept it, this is America now

The night following the election in Georgia and before the storming of the Capitol, the white supremacist right gathered on the streets of D.C. They claimed they were there for a rally to “stop the steal”; the lie Trump and his ilk had been propagating that the Democrats won the 2020 election due to voter fraud. That’s why they said they were there, but there is footage of the crowd chanting “f–k BLM!” over and over.

I’m sad because it’s so very clear how much these people hate Black people. And they’ve been permitted to grow in numbers and political strength without consequence.

The day of the violent events in D.C., one of the most disturbing images I saw was of two white men gleefully pantomiming George Floyd’s murder during the storming of the Capitol. Again, these are people who say their actions are related to voter fraud, but they feel the need to recreate this violent act—why? This week in Los Angeles, the city in which I currently reside, a Black woman who was walking downtown was violently attacked by a white supremacist mob. They hurled epithets at her, doused her with pepper spray, tore her wig off her head, and bruised her during the assault. Police were nearby. They did nothing.

RELATED: We must defund the police. It is the only option.

These images hit me to my core. What kind of depravity creates the motivation to do these things? I will never understand the impact that white supremacy and anti-Blackness has on the psyche.

After the election in Georgia, state Republican lawmakers immediately moved to change voting laws (unlike Canada, in the United States, individual states determine specific rules around voting in Federal elections). If they pass, the new rules will limit absentee voting and where electors can vote and impose strict photo identification requirements for those who do meet the new limitations on absentee voting.

The clear implication is that Republicans are attempting to prevent Black people from being able to vote in the same numbers ever again.

RELATED: Canada is not immune to Trumpism

Perhaps a coup is happening. But it isn’t solely being staged in the violent attacks that have occurred at state legislatures and at the Capitol.

As I’ve argued elsewhere this week, Canadians can’t be sanctimonious. Let’s not forget that in the 2018 Toronto City Council election, Ontario Premier Doug Ford, who was once named “Proud Boy of the Month” by the Proud Boys, reduced the size of the Toronto City Council by almost half. In redrawing the ward lines on the final day of the candidate registration period, several would-be councillors of colour were gerrymandered out of the race.

The disenfranchisement of Black people, the violent acts we are frequently subjected to, the resistance from politicians in power to even addressing the way police target and kill us, the substandard education, the targeting for incarceration, the devaluing of our very being—I am so sad, angry, sick and tired of living in a society that hates me.

Too much blood has been shed. It feels as though my brain is betraying me. Surely it cannot be true that so much obvious hate could be spewed towards Black people, and so many would ignore it, say it was harmless, explain it away as something else and simply allow it to continue?

When are we going to face this honestly and earnestly?

I am just so incredibly sad.

Sandy Hudson is co-founder of Black Lives Matter-Canada, co-host of the Sandy and Nora Talk Politics podcast and co-editor of the bestselling book Until We Are Free: Reflections on Black Lives Matter in Canada.