Sydney Loney was diagnosed with breast cancer in January. Due to the coronavirus outbreak, her scheduled mastectomy was cancelled, and she doesn't know how her cancer has progressed. 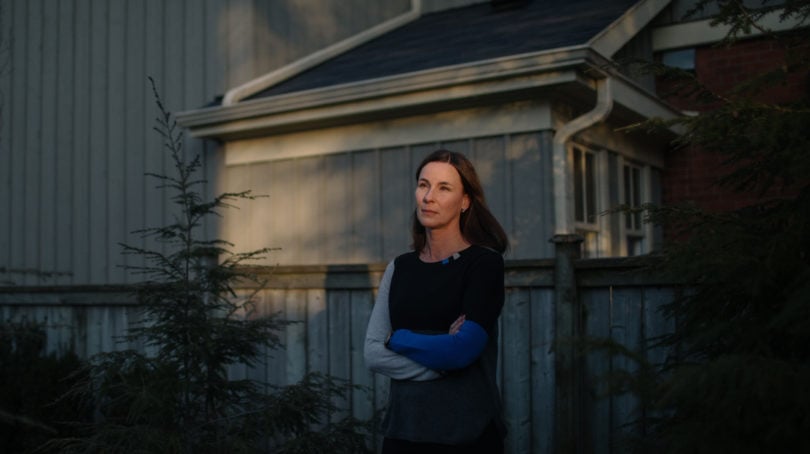 Sydney Loney was scheduled to have a mastectomy by mid-March. Now, due to COVID-19's impact on the medical system, her surgery has been postponed indefinitely. (Photograph by Chloe Ellingson)

Sydney Loney is a Toronto-based writer and editor whose work has appeared in Chatelaine, The Walrus and the Globe and Mail.

Last Wednesday morning I sat across from my surgical oncologist in a Toronto hospital and focused all my attention on not crying as she explained that the potentially life-saving surgery I’d been waiting for was on hold—indefinitely—because of COVID-19. “They’re not booking your procedure at all,” she said. She looked tired, as though she hadn’t slept in weeks.

My “procedure” is a mastectomy, lymph node biopsy and immediate reconstruction. It’s an eight-hour surgery. “We could move four other patients through in that time,” one of my surgeon’s assistants told me bluntly. And, for one brief, terribly selfish moment, I didn’t care. I just wanted to go and bang on someone’s door and insist that I need this surgery. And I’ve waited patiently for it, ever since I was first called back for more tests after a routine mammogram last November.

But the waiting room in the hospital’s breast cancer clinic was busy and I knew I wasn’t the only one grappling with news of a treatment postponed. There are thousands of casualties of COVID-19 outside of those who have actually fallen ill from the virus: small business owners, Olympic athletes, patients waiting to have cancer removed. I’m just one of many.

The true scope of the problem is tough to gauge. Even as I write this, the University Health Network (UHN), which encompasses four of Toronto’s largest hospitals, still reports optimistically on its FAQ page that “Surgeries will continue as planned for now. Surgeries that are needed to save a life will go ahead, but other surgeries may be cancelled in the near future.”

We’ve repeatedly been told in the news that only elective surgeries will be affected. My mother was booked for an out-patient operation on her wrist last week—cancelled. Elective, I get it. But my sister-in-law’s infant daughter was supposed to receive a feeding tube two days ago—also cancelled.

As a patient, I wanted some answers and, as a journalist, I figured I could get them. What exactly is happening in Canadian hospitals right now? And more importantly, what will happen to all of the existing patients who have been left in pandemic purgatory?

Both are questions I posed to Dr. Kevin Smith, president and CEO of the UHN. He informed me that up to 70 per cent of the hospitals’ scheduled activities have been “turned down” so far. That includes everything from hip and knee replacements—elective—to mastectomies and organ transplants—elective? “We have turned down live donors, particularly in kidney transplants, because those patients can be supported on dialysis for a period of time,” Dr. Smith said. I didn’t tell him about my situation.

The “scheduled activity” that has been shut down in hospitals across the country also includes, as I discovered, diagnostic imaging. After my surgeon told me my mastectomy wasn’t happening in the foreseeable future, she handed me a requisition form and sent me to the imaging department to book an ultrasound. The goal was to see just how far my cancer has progressed since my last test in January. Upon arrival, I was immediately told to come back in May—but not for an appointment, just to book one.

When I returned to my surgeon’s office with the blank form in hand, her assistant and I stared at it helplessly for a moment. “Maybe start calling in mid-April?” she suggested. There was nothing I could say that would change anything, and nothing she could say that would make it better. (At that point I popped into a restroom for a quick cry en route to the elevator.)

MORE: The struggle to stay safe from COVID-19 in a refugee camp

I don’t really remember driving home from the hospital (it’s probably a good thing that the highway was eerily empty). But I do remember my husband’s expression when I came in the door. Worse, my children’s. They are 10 and 13, and although I haven’t talked about my cancer much in the past few months, I have reassured them—promised them, even—that the surgery I was going to have in March would make everything okay. Now, I don’t know what to tell them.

During the day, when we’re busy juggling video conferences and work deadlines, or with getting everyone off their screens to go for a walk, or “distractabaking,” or playing a board game, it’s not so bad. At night, it’s terrible. That’s when my daughter starts to cry—and when I have to try hardest not to. My son wants to be tucked in, like when he was little, and I can’t seem to hug him enough. No one is sleeping well.

Wouldn’t it have been better, I asked Dr. Smith, to have moved as many patients through as possible in the weeks before the surge that we’re still all fearfully awaiting? “You know what, it’s a very good discussion,” he replied. “And we did have it. And, in some cases, like in cancer care, we have been proceeding with a number of cases.”

On average, 617 Canadians are diagnosed with cancer every day. Approximately 600,000 suffer from heart failure. And more than 4,500 are waiting for an organ donation. Those are just some of the thousands of critically-ill Canadians whose health now depends on how well-equipped our hospitals are to handle coronavirus.

Smith explained that shutting down hospitals is a way to preserve equipment, like ventilators in operating rooms, for the surge that, he says, most epidemiologists expect to hit around mid-April (although other experts argue that the pandemic may continue until as late as October). About 85 per cent of patients won’t be particularly ill and can recover at home, while 15 per cent are likely to be admitted to hospital (a third of those patients will wind up in the intensive care unit and a fifth of them will need a ventilator). But it hasn’t happened yet.

What we are seeing, says Dr. Brian Goldman, an ER doctor and host of the CBC’s White Coat, Black Art, is a surge of people being tested. As for how many have actually been admitted to Canadian hospitals with coronavirus, not many, he says. “At Mount Sinai in Toronto, we maybe have one patient. We’re still in the calm before the storm.”

I immediately posed the “then why not treat everyone else as quickly as possible” question. Dr. Goldman says it would have been common sense to have performed as many procedures as possible on Canadians who are already sick, instead of cancelling everything in a “hurry up and wait” approach. And, he adds, we’ll only know whether that was right or wrong in retrospect.

“There’s no question there are cancers that, in an ideal world, would not be sat on,” he says. “There will be a blip of increased morbidity and mortality as a direct result of the intentional neglect that’s occurring because of the prioritization in favour of COVID-19.”

Great. That’s small comfort to one of the “intentionally neglected.” I hesitated, then told him I was one of them. “Yikes,” he said. “Oh my god. I’m so sorry to hear that.” He knew that hip replacements were on hold at his hospital, but he didn’t know about mastectomies. “The problem is we’re now living in a world of everybody second guessing themselves,” he says. And it’s almost as bad to be a doctor in this world as it is to be a patient. “How does it make me feel? It makes me feel awful,” he says.

It’s one thing to be told you have cancer, quite another to be told you won’t be treated for it until, well, no one knows. Dr. Smith says there are conversations happening about how to deal with the immense backlog of critically-ill patients sidelined by the virus—resources may be moved around, operating rooms may run on weekends and holidays. But will doctors be able to put in extra hours at that point? And what money will be left to fund any of this? As far as responses go, I’m not convinced that “conversations” are going to be enough. “Just stay in close contact with the care team you’ve been identified with or keep calling the hospital where your surgery’s been scheduled,” he says. (But, he adds, you might want to wait a few weeks.)

Trying to make the best of a bad situation, my surgical oncologist has put me on Tamoxifen (a drug typically used post-surgery to prevent the cancer from coming back) in an attempt to slow the growth of my tumour. The first time I met her, she was calm, reassuring and looked reasonably well rested as she reviewed my breast cancer treatment options with me. She told me “dying isn’t part of the plan.” Now, I’m not entirely sure what the plan is.