I quit Twitter two years ago and never looked back

Calum Marsh: The widespread cheapening of Twitter discourse by attention-seeking politicians and journalists is form of ‘shock advertising,’ and one big waste of everyone’s time 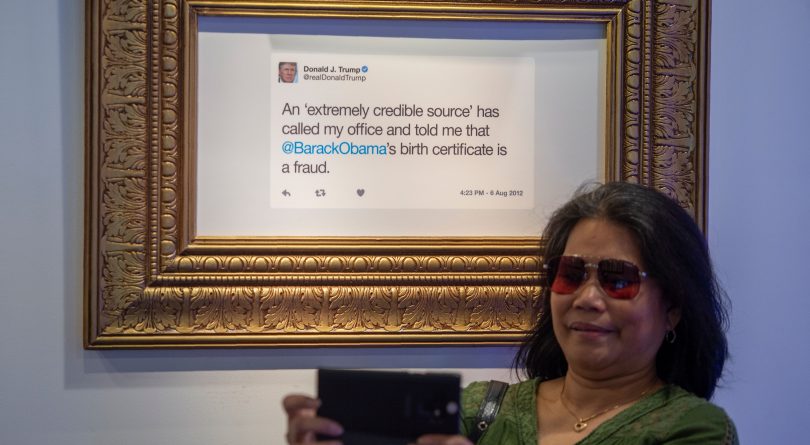 A visitor takes a selfie near a framed tweet by US President Donald Trump at "The Daily Show Presents: The Donald J. Trump Presidential Twitter Library" exhibition in Washington, DC on June 14, 2019. (Andrew Caballero-Reynolds/AFP/Getty)

In his memoirs, Gore Vidal tells of the time when Graham Greene, in a conversation about discretion and privacy, accused him of a disgraceful gaucherie—that the intellectual novelist seemed to actually enjoy appearing on television. “I said I liked to talk publicly about politics,” Vidal writes. “And street corners were no longer desirable venues.”

These days, of course, writers don’t have to appear on television to satisfy their desire for street-corner sermonizing: they can talk about politics, or anything else they like, on Twitter. Though lately this too has seemed a sort of faux pas among serious people.

Over the past few weeks, debate about the value of the micro-blogging platform arose across the internet, as various reporters and critics, as well as pundits and politicians, grappled with the question of whether Twitter was doing them more harm than good. It was a continuation of an argument that’s been dragging on since January, the latest flare-up of a conflict nearly as old as the site.

The most recent round started with a polite call for journalists to quit Twitter. At the beginning of the year, Farhad Manjoo, an opinion columnist with the New York Times, cautioned that “every day the media’s favourite social network tugs journalists deeper into the rip currents of tribal melodrama,” warning that an immersion in a cesspool of “hot takes” and viral assertions was indeed “short-circuiting our better instincts in favour of mob- and bot-driven groupthink.”

He exhorted his colleagues: “It’s time we journalists all considered disengaging from the daily rhythms of Twitter, the world’s most damaging social network.”

A few months later, Yascha Mounk, writing in The Atlantic, called for journalists and politicians to not simply use Twitter less, but stop paying it any mind. While maintaining a Twitter account, she writes, “has become part of the job description for some of the most influential people in the country,” the truth is that it’s “not representative in the slightest” of the real, ordinary people who read newspapers, decide elections, and generally live their lives away from the petty vicissitudes of the timeline.

International politics has been acutely affected by Twitter, of course. Donald Trump’s compulsive tweeting leading up to and during his presidency has been the subject of strenuous global debate. But evidence suggests the average American cares rather little about Trump’s fleeting fixations. As Mounk points out, much tweeted-about affairs such as the Mueller report have “barely left a trace in public opinion,” not modifying his approval rating in the slightest and scarcely mattering to anyone outside of the “bubble” of politico-Twitter.

In Canada, too, Twitter can distort perception, arousing meretricious controversies over the most trifling indiscretions. A reporter recently accused Liberal MP Adam Vaughan of trying to “fearmonger about facts,” “scaring people” with a one-off tweet about “right-wing scapegoating” and the children of refugees that was widely felt to be misleading. (Vaughan deleted the offending tweet, and was obliged to spend several days apologizing and backpedaling.) Last month, Twitter was alight with discussion over the right of politicians to block users, after it was found that Conservative MP Michelle Rempel had blocked dozens.

Such trivial controversies, the fugitive cause célèbre, occasionally feel manufactured, as if the attention-seeking politician is happy to tweet something inflammatory if it means winning eyes and ears. It can be a form of shock advertising (and, naturally, it worked for Donald Trump), even if it contributes to the widespread cheapening of Twitter discourse. This kind of thing, Mounk writes in her piece, is a tremendous waste of everybody’s time; an endless routine of vexing but ultimately irrelevant outrage.

Younger writers, who made their careers online and know only journalism in the age of social media, have meanwhile been airing their own growing concerns.

In Mother Jones, journalists and authors (and frequent Twitter users) Jenny Odell, Jia Tolentino, Mike Isaac, and Ashley Feinberg discussed Twitter the way several struggling addicts might discuss their relationship with drugs: “Like, you guys know the feeling when you end up looking at Twitter too much too early in the day, and then for the rest of the day you’re just totally fucked?” Tolentino asks. “Your brain is like a grasshopper, and it can’t sit still at all?”

Logging on in the morning, Isaac echoes, “is like walking into Mad Max,” as straight away he’s compelled to “spend at least an hour divining who is fighting who about what, and what some subtweets even mean.” They agree it’s a problem. They feel helpless before it.

I quit Twitter two years ago this week, in a rash bid to salvage my disintegrating attention span. I jettisoned a verified account, one I’d maintained carefully since 2008, and abandoned something like 7,000 followers; I didn’t announce my departure, write an essay about why I was quitting, or think very hard about what I might lose. One afternoon in late August, looking at Twitter put me in a foul mood—suddenly I realized it was too often putting me in a foul mood, distracting me from my work, and making me waste a lot of time on inane arguments and ludicrous opinions.

In the beginning, Twitter was a place for me to share my writing and fraternize with like-minded individuals. By the end, it was a riot of hate-reads and bad-faith quarrels, a daily bout of mean-spirited sniping while desperately trying not to say the wrong thing. I’d somehow traded amusement and delight for annoyance and anguish. It was throwing me off-balance. When I hit the deactivate button, I felt my equilibrium restored.

Twitter, like any social network, eats up time. But the ideas it disseminates and the debate it fosters takes up mental real estate, which is even more precious. The last two years, off Twitter, I’ve been happier, healthier, more productive. It’s not because I’m no longer wasting hours opening and closing the app, seeking distraction on the timeline. It’s because I’m no longer thinking about stuff I saw on Twitter.

The reluctance to quit—particularly in journalism and politics—is driven in part by the pernicious fear of missing out on something, whether the news of the day or an opportunity to exert some influence. When I shut down my account, colleagues warned I might fall out of touch with the cultural conversation, or worse, shut myself off from job prospects and stall my career advancement. Even if I’d come to resent Twitter, they told me, I still needed it.

Sarah Manavis, in the New Statesman, wrote last week about her own obsessive relationship with Twitter, and the 10-plus hours she spends on the platform every week. (It’s easy for the habit to get to that stage: seductively infinite, a deluge of new content always spewing forth.) Besieged by Twitter-provoked anxiety attacks and timeline agony, she asked her followers to describe their feelings about the site. “Users told me that it made them feel bad about themselves,” she reports with grim recognition. “It gave them anxiety and depression; and that, even if they’d originally enjoyed it, the app had become too much to bear.”

Interestingly, though, Manavis found a common theme among the platform’s weary and miserable: “No one—bar one single person—felt they could fully quit Twitter for good.”

People unable to quit frequently give the same reasons. Twitter furnishes reporters’ news stories; it locates journalists’ contacts and sources; it provides politicians a direct line to the common voter (or so they believe despite suggestions to the contrary). Writers worry that without a Twitter account, they’ll have a harder time cultivating and selling a personal brand. There is a widespread sense that quitting Twitter is like choosing exile; cut off from one’s peers, the ex-Twitter user is left to wander the offline world, isolated and ostracized.

“Maybe the depression, anxiety, and growing compulsion to self-harm by reading screaming tweets are the price we pay for more opportunities, better jobs, and more meaningful connections,” Manavis reflects.

It’s difficult to know if my life or work would be any different if I’d remained on Twitter. It seems to me that I’ve been fine without it. I suppose it’s possible that a tweet could have led to some propitious success. It’s equally possible that a reckless or imprudent tweet could have driven me to ignominy. After all, you don’t get to choose which you get.

“I never do television,” Graham Greene told Gore Vidal haughtily, after a speech in the late 1980s. He felt the writer who did was demeaning himself, putting himself out there in an obscene way. No doubt he would have felt the same way about the writer who elected to tweet. There are more sensible ways to express an opinion, even in the absence of street-corner monologues. You need the room to concentrate and the freedom to think. And to do that well you need to log off—deactivate.

Real news always makes its way through, and I haven’t had difficulty keeping up with what’s relevant, serious or important. It’s only the raucous noise that I’m no longer hearing. When it comes to Twitter, you need to be offline.