Where might Donald Trump run, in a bid to avoid prison? 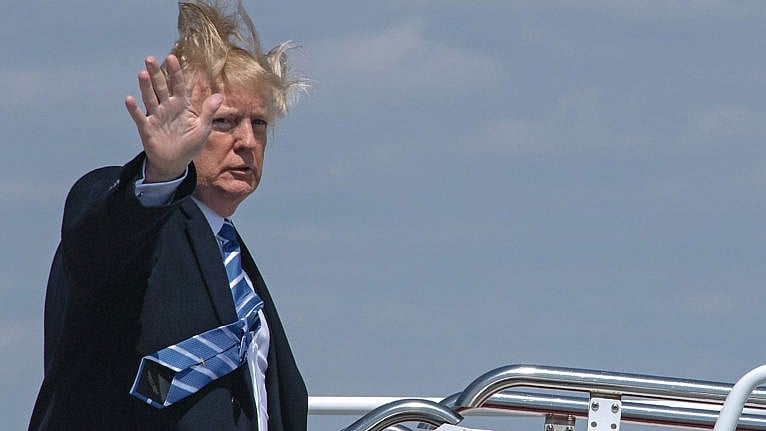 Donald Trump seems particularly ill-suited to prison life. Although self-awareness is not often cited among his greatest attributes, he most likely grasps this singular, essential fact about himself: he would not care for jail and jail would not care for him. He can be expected to do anything to avoid it—anything, that is, but avoid illegal activities of the kind that ordinarily lead to prison time.

It appears he may have done a fair amount of illegal activitizing, in fact, and enough of it appears to fall so far outside the scope of a presidential self-pardon that various New York prosecutors are ready to charge him the moment he vacates that poor Resolute desk. And so, in an era of ceaseless, unremitting firsts, for the first time in history, the president of the United States might soon find himself on the lam.

Although it is difficult to conceive of the leader of the free world joining the ranks of the various aging Nazis, ousted despots, retired mobsters and deadbeat ex-husbands currently circling the globe in search of a hideout, once presidential immunity is lost it is hard to see what alternative he would have. The president has given us one hint, so subtle as to be nearly imperceptible, that he may have to leave the country: at a recent political rally, he said, “Maybe I’ll have to leave the country.”

The country must of course receive Trump in the style to which he has grown accustomed: golf courses are worth five points; very garish, very tall buildings another five. Other attractions would include being Russia-friendly (11 points), hosting Trump-owned pieces of real estate or businesses (five points), and offering a tax environment for billionaires who prefer to pay in the $750 range (five points). A country may earn a maximum of 41 points.

Slovenia: Melania Trump is from Slovenia; however, our methodology does not recognize a connection to Trump’s wife as indicative of a travel preference. This is not a flaw in our methodology. 0/41

Anywhere Whatsoever in Africa: Trump may soon regret referring to nations that may otherwise have harboured him as “s–thole” countries—although many countries in Africa don’t have extradition treaties with the United States and, much like American voters, they may send him back for the sheer joy of it. 10/41

France: The French don’t have particularly low taxes; on the other hand, they have golf courses, and various gilt things. And France (which would never be so gauche as to reliably adhere to the rigidities of an extradition treaty) is currently home to Roman Polanski—like Trump, an entertainment professional who in his spare time likes to relax, eat good food and be accused of rape. It’s a possibility. 15/41

Macau: Gambling institutions have purchased the right to use Trump’s trademark in Macau, doubtless as an attraction for the discerning gambler who likes his casinos serially bankrupt. Macau is a haven for tax dodgers and a hiding spot for fugitives. It’s glitzy, it’s garish, and there’s probably a golf-themed slot machine somewhere on the island. The only thing missing is a nice Russian dictator to share it with. 30/41

Andorra: Andorra is a rare example of a European nation with no extradition treaty with the United States; unfortunately, it is no longer the tax haven it once was. Also, Trump would be bored. No high society he can complain about being excluded from, no skyscrapers, just…churches. 10/41

Montenegro: Also in Europe, also without an extradition treaty. It doesn’t attract golfers on account of it having basically no golf courses, but it does attract real estate investors, particularly those who wish to take advantage of its offer of a residency permit in exchange for property purchases. It also attracts Russian tourists and bots, the latter making a concerted effort to sway this strategically located country more in Putin’s favour. They have an easy task: within Montenegro, Russia is viewed more favourably than any other country, and—like Trump—roughly 40 per cent of Montenegrans say they admire Putin.

Saudi Arabia: When Trump introduced his Muslim ban, a few Muslim countries were omitted from the list. Saudi Arabia was one of them. Trump does business in Saudi Arabia and Saudi Arabia has made it known that it would prefer to continue doing political business with Trump. Trump declared an emergency just so he could veto House opposition to him signing an $8-billion arms deal with the kingdom. Masters play golf there, billionaires put their money there, skyscrapers skyscrape there. Trump, we could easily conclude, might well go there—if only Putin could go, too. Moscow’s relations with Riyadh are fraught, but perhaps not so bad as to rule Trump’s potential relocation plans. 35.5/41

Russia: There are few places in the world more Russia-friendly than Russia itself, and few world leaders more Russia-friendly than Trump. In the 1980s, it built golf courses near Moscow specifically to attract American investors; Trump is one of the American investors who obliged. Russia, in turn, appears to have invested in Trump. Granted, Moscow and St. Petersburg don’t have many of the 58-storey mirrors that are Trump’s preferred building type, but Putin would probably let him build one eventually that the American president could be safely locked up in, so half points for phallic architecture. Moscow has a long tradition of offering its Western assets involuntary sanctuary. As for taxes, Putin associates get a rebate. It’s almost perfect—but not quite. 38.5/41

U.A.E.: Another Muslim country excused from Trump’s Muslim ban; another country with no extradition treaty with the United States; another tax haven. But it is only the U.A.E. with which Trump recently signed a multi-billion-dollar weapons deal, just as he was losing a presidential election. The U.A.E. is also becoming a closer strategic partner of Russia in the Middle East, as both generally share a similar assessment of the region’s popular democratic movements: they don’t like them.

Regarding lifestyle, the U.A.E. is not known for flowing champagne, but Trump doesn’t drink anyway, for fear it would impair his very sound judgment. The U.A.E. has nice golf courses: it built them the way it built its islands—by stacking piles of cash on top of each other. Compared to New York, Dubai may have all the glitz with little of the glamour, but that is extremely on-brand for Trump. And Dubai not only has taller buildings than any country on this list, it has the tallest building in the world. For the first time in his life, Trump could boast about the size of something and be right. For Trump, the U.A.E. earns a perfect score.

Prediction: If the President of the United States becomes an international fugitive, he will seek sanctuary in Dubai, U.A.E. Of course, that assumes he responds to defeat by actually leaving office. Which would require that he follow the law. Which, you know…

This article appears in print in the January 2021 issue of Maclean’s magazine with the headline, “President on the lam.” Subscribe to the monthly print magazine here.