In defence of Canadian shipbuilding

Jeffrey F. Collins: It would be nice if there were an off-the-shelf ship Canada could acquire, but none exist. Nations build ships to meet their own operational demands. 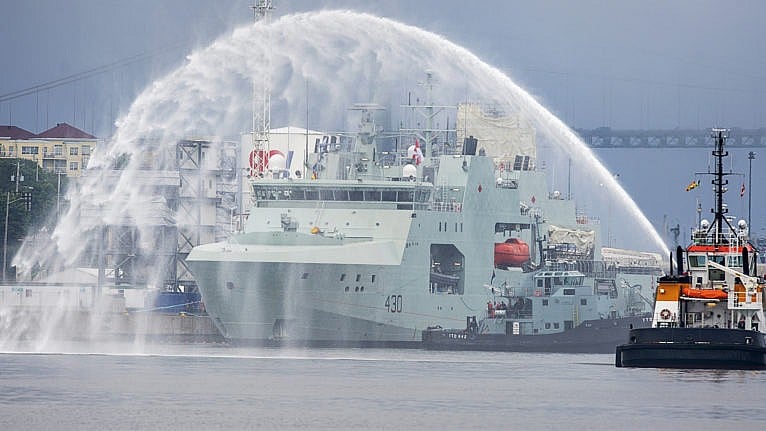 HMCS Harry deWolf heads from the Halifax Shipyard on its way to being delivered to the Royal Canadian Navy dockyard in Halifax on July 31, 2020 (CP/Andrew Vaughan)

Jeffrey F. Collins is a Fellow with the Canadian Global Affairs Institute and a researcher in defence procurement

Budgets, it is said, can sink warships. Reports by the Parliamentary Budget Officer (PBO) and Auditor General (AG) last week into Canada’s National Shipbuilding Strategy (NSS) paint a challenging picture for the multi-decade effort to build 52 large ships for the navy and coast guard. The PBO report estimates that the cost for the yet-to-be-built 15 ship Canadian Surface Combatant (CSC) has jumped from $60 billion to $77 billion. The AG meanwhile pins delays and cost overruns in the NSS on the lack of personnel both within shipyards and in government.

The near consensus response from the national commentariat is to throw in the towel, accept that Canada cannot do defence procurement, launch a Royal Commission, make it “illegal” to build ships in Canada, and bizarrely, considering their own challenges, buy our fleet from the Australians. Abandoning ship (pardon the pun) and opting for an overseas buy may certainly seem tempting, but beware: modern naval shipbuilding is far more complex and expensive than meets the eye. What may seem like a bargain (see: ex-British submarines) rarely ever is. Instead, the decision to build a fleet at home or abroad must be seen within the context of trade-offs, of which cost is just one.

Strategically, Canada is a maritime power. Although often forgotten in central Canada, Ottawa presides over the world’s longest coastline, second largest continental shelf, and fifth largest exclusive economic zone containing vast sea life and petroleum reserves. To the north, the twin impact of melting sea ice, a global resource hunt, and tensions between the U.S., Russia and China are transforming the Canadian Arctic into a ‘geopolitical centre of gravity’. In the north Atlantic, Russian submarine activity is at post-Cold War highs. The Indo-Pacific, the site of growing Canadian trade and political ties, sees a Sino-American rivalry criss-cross the South China Sea and the Taiwan Strait, all amid a regional submarine arms race, and anti-ship missile build-up.

It would be nice if there were an off-the-shelf ship Canada could acquire, ready-made for naval service in such a challenging global operational environment, but this is not the case. To no surprise, foreign countries build ships to meet their own operational demands. German submarines are designed for short range missions in shallow Baltic waters. Likewise, the British Type-26 frigate is one of four warship types being built for protecting the Royal Navy’s aircraft carriers and nuclear ballistic submarines.

Canada’s adoption of the Type-26 design in 2018 for the CSC project envisions a more expansive and ambitious role. Meant to last for 40 to 50 years, the CSC will be the sole true warship for Canada. It adds new capabilities to deal with the global tensions cited above (e.g., Tomahawk cruise missiles) and replicates those found in the now retired Iroquois class destroyers (area air defence) and still-serving Halifax class frigates (anti-submarine warfare). Fitting these Canadian requirements into the British design has consumed time and money but Canada is left with a Type-26 attuned to its needs.

The National Shipbuilding Strategy’s 30-year approach of continuous shipbuilding to avoid ‘boom and bust’ cycles may be new, but building Canadian warships, to Canadian specifications and in Canadian yards, dates to the Second World War. Except for submarines and aircraft carriers, it has been official bi-partisan policy to build Canada’s large naval ships domestically. The impetus to build local is hardly a Canadian preoccupation. All other G7 members have naval shipbuilding programs, as do smaller and mid-size powers like Spain, Italy, the Netherlands, Denmark, Australia and Norway.

Finally, building in Canada has other ancillary benefits too. In a time of economic nationalism (e.g., vaccine production), domestic shipbuilding minimizes both the risk in relying on foreign supply chains and in operational disruptions (and costs) from sending fleets overseas for maintenance. The knowledge gained from building the Halifax frigates paid off when it came to completing the equally technically challenging and costly refits here in Canada.

The NSS is far from perfect (as the PBO and AG reports note) but neither are there easy or cheap options. If we are serious about tackling international security threats, upholding global norms, managing tensions, and defending our own sovereignty we better be prepared to pay up.