Shannon Gormley: Hong Kong authorities withdrew an extradition bill that spurred protests by the millions. But just wait for real change in a couple of short decades. 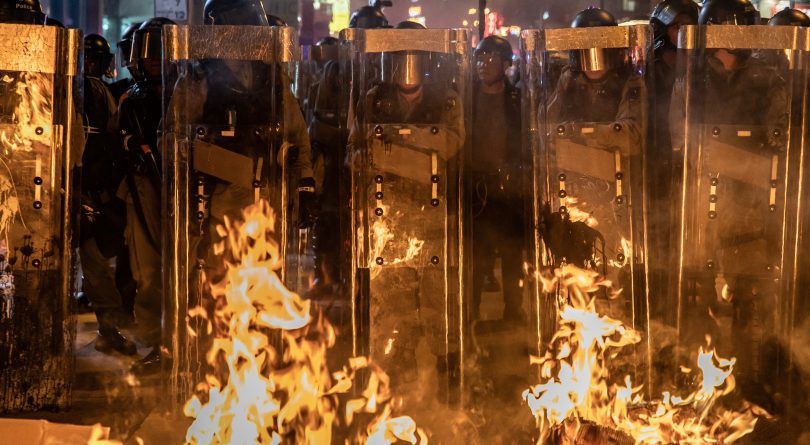 Riot police stand in front a barricade set on fire by protesters after dispersing crowds outside the Mongkok Police Station on September 7, 2019 in Hong Kong, China. (Photo by Anthony Kwan/Getty Images)

So that settles that: all’s well again in Hong Kong. The extradition bill has been withdrawn.

Consider what a generous concession this is. After introducing a bill that would have given Beijing the authority, in effect, to kidnap Hongkongers to the mainland; after ignoring Hongkongers’ demands that the bill be withdrawn, even after 500,000 of them, then one million, then two million, filled the streets in protest; after teargassing them, after clubbing them, after arresting them, after firing live ammunition near them, after unleashing neighbourhood gangsters in white T-shirts upon them; after inspiring some of them to jump off buildings and others to jump off walls; after taking out a girl’s eye with a beanbag round, and a subway full of people with pepper spray; after subjecting the city it governs to a months-long campaign of repression in defence of its brazen attempt to legalize more repression, Hong Kong authorities have graciously offered to withdraw the bill.

That should surely shut the kids up.

Better still: by agreeing to scrap the bill—this singular concession, and no other—the authorities imply not only that no grave offence was committed against Hongkongers in the months following the bill’s introduction, but that none was committed in the several years prior, as Beijing began to tighten its grip on the former British colony. Certainly no offence so grave as to justify the scale of these protests or the continuation of them.

READ MORE: The Water Movement: Inside the fight for Hong Kong

Hongkongers have not, one may suppose, been subject then to creeping encroachments on their rights and freedoms; have not had to watch their media outlets, their elections, their political parties, their territorial jurisdiction, even their school curriculum, buckling under the growing weight of China’s liaison office in Hong Kong. As you were, then—nothing more to see.

Now, a cynic might ask, if all is right in Hong Kong, why have millions of people not only spent months subjecting themselves to beatings, surveillance and economic decline to stop the accelerating erosion of their rights, but seem prepared to prolong their suffering indefinitely?

Well, maybe the bill was awkwardly phrased. Not bad in principle, you understand—just not well expressed. Got people’s backs up. And you know those millennials: sure, they say they want universal suffrage and competent leaders and meaningful inquiries into police brutality and the release of people arrested for defending their democratic rights, but really they’re just mad they can’t find a good apartment. If they insist they want more than a guarantee they won’t be sent across the border to prison in a dictatorship—continue to insist on it even after their well-meaning government was generous enough to withdraw this good-but-badly-communicated bill—then those with any sense can draw but one conclusion. Hong Kong is overrun by radicals.

If Hongkongers see this as more than a mere fight about policy—as, rather, an existential fight for their freedoms, their very lives—well, they must be wrong. After all, to show how reasonable the government is, and how obliging, and how fair-minded, just look! It’s withdrawn the bill. If Hongkongers are reasonable, then, they’ll stop fighting it.

Unless, of course, the Hong Kong government has not suddenly come to its senses. Unless, that is, it granted this one protester demand—kill the bill—with the express purpose of making the protesters look like they have no reasonable cause to fight for any other demands.

Unless, that is to say, the government made only one amend of the many required of it not because it believes for one minute its paltry offer would stop people from protesting, but because it thinks the offer will make all further protests look unreasonable. So unreasonable, perhaps, that further protests may justify the government’s cracking down with unthinkable violence.

Or perhaps, in the fever dreams of Hong Kong’s increasingly desperate authorities, even render a crackdown unnecessary. If the offer to withdraw a bill that never should have been introduced convinces Hong Kong’s moderates that the protests are radical, authorities may imagine, the moderates might thereby be persuaded to kill their own cause, just as the government killed its own legislation.

But no. A government that has behaved so cynically and so stupidly can’t have dreamt up a scheme so cynical and so stupid. And surely the good people of Hong Kong will trust their government to have their best interests at heart now that this unfortunate misunderstanding has all been cleared up. Only an extremist would not wish to return to those halcyon days before the bill—that is, to the very state of affairs that led Hong Kong’s authorities to beat and harass and threaten to export their own people to a dictatorship that is nearly unmatched in its ability to institutionalize beatings and harassment.

Besides, if people are so insistent on a change in leadership, they need only wait a couple of short decades. In 2047, the handover agreement on which Hong Kong’s few remaining freedoms depend will expire, and the dictatorship can swallow it whole.

This article appears in print in the October 2019 issue of Maclean’s magazine with the headline, “Unbelievable Hong Kong.” Subscribe to the monthly print magazine here.