Is Justin Trudeau finally showing some backbone on China?

Andrew MacDougall: What do the surprising comments from Canada's ambassador to China really mean? Let's turn to our Kremlinology textbooks. 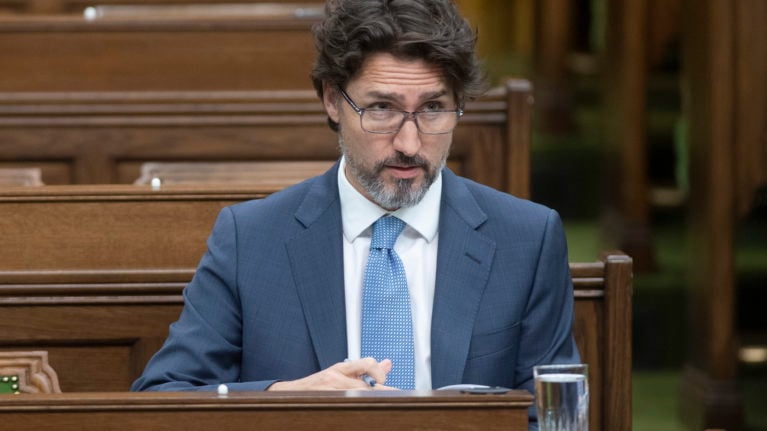 Trudeau waits for a session of the Special Committee on the COVID-19 Pandemic to begin in the House of Commons on May 13, 2020 (Adrian Wyld/CP)

To those convinced Kremlinology is a pursuit best reserved for totalitarian communist regimes, allow me to rebut with two words: Dominic Barton.

Canada’s man in China, Ambassador Barton is in the news for comments delivered in private last week to a (virtual) gathering of the Canadian International Council, in which he opined that China is accumulating “negative” soft power thanks to its prickly response to international criticism over the COVID-19 pandemic. What’s more, Barton also said he would back a “rigorous review” of the World Health Organization’s response to said pandemic.

So far, so ‘dog bites man.’ As in, where’s the news? I mean, who doesn’t think the WHO has room to improve, or that the Chinese regime is being thin-skinned over the criticism it’s been receiving? Have you tracked what the regime’s spokespeople are saying and tweeting these days? They’re so jacked up right now they make Tony Montana look like Joe Clark. One stray word and it’s “say hello to my little bot army friends”, with a side-order of trade sanctions and a ludicrously-worded statement defaming your nation.

China’s rising obstreperousness is partly what makes Barton’s comments news, but it’s the stark contrast to the kissy-kissy usually sent China’s way via the on-the-record sections of the Justin Trudeau government that makes it boffo box office. Just last week, to pick but one example, Foreign Affairs Minister François-Philippe Champagne went to absurd lengths to avoid being tricked into saying the word “Taiwan” after the country-that-shan’t-be-named donated some much-needed COVID-19 kit Canada’s way. If you want to understand Canada’s position on China, I find it helpful to recline on the floor and invite someone to walk over you.

Turning to our Kremlinology textbooks: Is Barton reciting Canada’s actual position, or merely its position in private? Was he freelancing? Or did he get Rex Tillerson-ed? Or maybe he Tillerson-ed himself? I suspect we’ll find out in short order.

Then again, it would be nice if the Trudeau government would just come out and say whether it’ll support allies like Australia who are pushing for a probe into China’s early handling of the virus. Or describe exactly how much of a review they’d like into the WHO’s actions vis-a-vis the outbreak. We shouldn’t have to bust out our magic decoder rings to understand the government’s position.

Adding to the intrigue is the way in which Barton’s comments came into the public light. The CIC event was held under “Chatham House” rules—i.e. what happens at Chatham House stays at Chatham House—but three (three!) separate sources got into the ears of reporters at the Globe and Mail to brief the story that eventually splashed across the paper’s front page. Who were these rogues? Tories? Loyal Liberals, disgusted at Barton’s comments? Dissident Liberals, unhappy with their government’s toadying? One leak could be anybody, three sounds like a plan. Anyway, as I was saying, Kremlinology is hard work.

One thing is clear: Barton isn’t the most likely candidate to speak truth to China’s power. For one, it’s literally his job to convey Canada’s obsequiousness to China. And lest we forget, it was his previous firm McKinsey—where Barton was a managing director—that apparently missed the entire surveillance state being erected in Xinjiang Province despite advising several Chinese state-owned enterprises and holding a corporate retreat in Kashgar, four miles down the road from one of the camps. Barton has done well in China because he knows how the game is played: speak no evil and reap the profits. It’s this past that makes his comments now all the more interesting.

If the lack of government clarity on China policy seems familiar, it’s because we’ve been here before. Precisely here, in fact.

Cast your mind back, way back, back to the Before Times, when the biggest irritant with China wasn’t the coronavirus, rather the arbitrary detention of Canadians Michael Spavor and Michael Kovrig in response to Canada’s arrest—at U.S. request—of Huawei CFO Meng Wanzhou.

Trudeau’s ambassador at the time—former minister John McCallum—stuck his foot in it by suggesting in private that Meng had a good case to make against the U.S., a line that wasn’t all that helpful in full view of the public with the unpredictable Trump regime. McCallum then recanted, only to later canter onward with his original position, forcing Trudeau into firing him when the mess became too big to ignore. Barton would eventually replace McCallum eight months later.

Has Barton tipped over an even bigger mess with the Chinese? Or has he merely been sent out to float a change in approach? If it’s the latter, the government should put it on the record so we can stop reading our tea leaves.

And if it’s the former, our man in China will soon be looking for his “next opportunity.”