'It’s like developing feelings for a video of someone instead of the real person': Dating during the coronavirus

Shawn Rozen: The pandemic is almost like a perpetual third wheel, hindering dates in moving from platonic to romantic 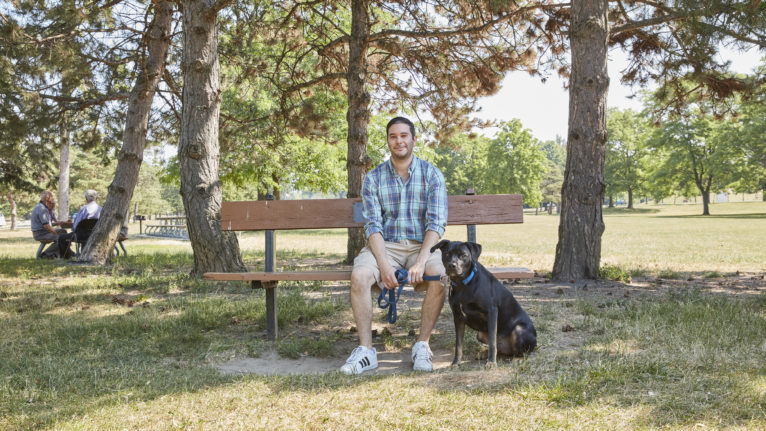 I’m 29 and the only single person in my group of friends. That means I’m always the third wheel, or the fifth or the ninth. When Toronto went into lockdown, my friends quarantined with their partners while I was on my own in my one-bedroom condo in North York, Ont. If it wasn’t for my dog, Bear, who I adopted at the beginning of March, it would be a lot worse. Even so, quarantine was lonely: I wished that there was someone on the couch next to me watching movies; cooking meals were less exciting when I was the only one enjoying them; and honestly, I wish I had someone to do puzzles or play boardgames with.

I’m a quiet, laid back person so even before we were ordered to stay home, I dated online instead of asking people out in person. My last relationship ended in June 2019 because I wanted to get married and start a family, but my partner did not. In the months that followed, I was on Hinge, Bumble, JSwipe and Tinder nearly every day.

I knew what I wanted out of dating before the pandemic—I’m not looking for something casual. I’m looking for a relationship, someone who I can build a life and a family with. At the same time, it’s harder to meet people and then to try and build a relationship, while staying safe. If anything, COVID-19 is delaying my search for love.

MORE: A neighbour regrets a pandemic-era scolding: ‘I looked for you, but you’d vanished’

I remember feeling hopeful after a first date in early March. I connected with a 29-year-old brunette named *Alex on Hinge. She was really pretty and her profile made her seem down to earth and relatable. We agreed to meet up for a drink the same day we matched, but when I got to the restaurant, a server informed me that it was closed due to coronavirus. Our date had barely started and already things were not going according to plan. I was embarrassed, but Alex didn’t seem to mind and we switched locations to a dessert spot nearby.

After we ordered a couple slices of cake, we chatted about our travel adventures, compared online dating stories and shared personal career aspirations. I was surprised to learn that she had only been single for a couple months after ending a long-term relationship. It took me much longer to recover after my last breakup. When I eventually start dating again, first dates often fell flat. Sometimes I just wasn’t into it—it was like my body was there but my mind was somewhere else. Other times, it felt like an interview. Even though I was going on lots of first dates, they rarely led to a second date.

With Alex, it felt different. By the time her mom called to check in, it was nearly 1 a.m. and we had been sitting and talking for four hours. The time had just flown by.

I left that date with a huge smile on my face, feeling like this might actually lead somewhere. For our second date, we went on a one-hour hike in Newmarket, and got beyond the typical first-date questions. I learned more about her family and we talked about silly things, like what we would do if we won the lottery (she’d help support her mom). Even though COVID-19 was all over the headlines, I don’t remember discussing it.

At the end of our date, we were sitting in my car, and I blabbed—I told Alex wanted to kiss her. She smiled, but told me she wanted to take things slow, which was fine with me. I figured we had plenty of time.

But by the end of March, the pandemic restrictions tightened and the possibility of a third date became more complicated, if not impossible. As a health care worker, Alex wasn’t comfortable meeting up for socially-distanced dates and I ruined things by pressing the issue. The second, and last time I asked her out, I instantly regretted it.

So I returned to online dating, mainly Hinge and JSwipe, the two apps where I found people put the most effort into their profiles. Near the beginning of the pandemic, I went on a socially-distanced date to a park, where we shared some drinks in a gazebo. As lockdown got more strict, I switched to phone calls or video chats.

In theory, having a drink with someone in a bar can be similar to having a drink with someone while video chatting. You’re still facing each other, asking questions about the person and getting to know them. At the same time, it’s an entirely different atmosphere. Instead of being at a restaurant, surrounded by other people but focused on each other, video dates often have your home as a background, you wear casual clothes, and it feels more like an interview.

My first date with Alex in March had flirty touches, like a hand on the shoulder or a lingering hug. It affirmed that we were both into it, that there was a mutual attraction. That energy is harder to read through a screen. Now it’s like developing feelings for a video of someone, instead of the real person.

Restrictions have started to ease and I’ve gone on a few dates socially-distanced dates—often to dog parks. Each time, we didn’t wear masks, but we stayed far apart. It’s better than video dates, but still not the same as before.

The pandemic is almost like a perpetual third wheel, hindering dates in moving from platonic to romantic. I’ve recently had a few dates where I wanted to go in for a hug or even a kiss, but I know that’s not safe. Still, the pandemic is fuelling my motivation to find a partner. At the same time, it now feels like I have to commit to being in a relationship with someone before our first kiss.

–As told to Ishani Nath