Stephen Maher: If the momentum shifts, the NDP will suddenly be competitive in urban seats, while Tories can hope for the splits they need in the suburbs 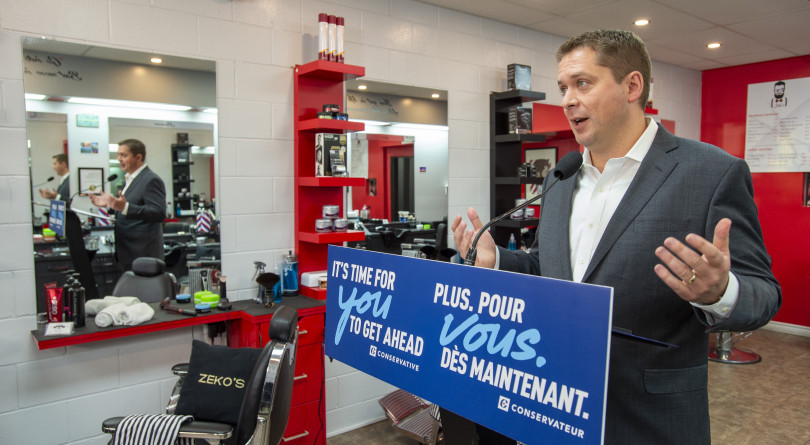 Scheer speaks at a campaign event in Hamilton, Ont., on Sept. 18, 2019 (THE CANADIAN PRESS/Frank Gunn)

Until Wednesday, Canadian Conservatives were privately anything but upbeat about Andrew Scheer’s chances of winning power in the election this fall. Historically speaking, Tories would point out, majority governments don’t collapse overnight. Canadians typically edge away from parties gradually, not suddenly.

And Scheer seemed to be playing defence. He had selected policies seemingly designed to keep the party strong in the Prairies rather than competitive in urban suburbs, as if his team had decided to focus on maintaining its strongholds rather than winning power, partly because at all costs they had to prevent Maxime Bernier from establishing a permanent base to their right.

And when the NDP is weak, as it was until Wednesday, the Tories couldn’t hope to squeeze the Liberals in ridings across the country where the election day choices of NDP-Liberal switchers decide the outcome.

In the first week of the election, the Liberal war room rolled out damaging material about Conservative candidates, aimed at scaring those switchers, not potential Conservative voters.

You could sense the traditional Liberal end-of-campaign argument coming: Don’t vote NDP or you will get an anti-choice, racist Conservative government.

READ MORE: 2019 federal election platform guide: Where the parties stand on everything

Jaghmeet Singh looked ill-equipped to parry those attacks. Although he performed well in the campaign’s first week, New Democrats, broke and demoralized, were bracing for a total wipeout.

Then, in a few hours on Wednesday night, everything changed, and now the Liberals are facing disaster.

Time magazine found a yearbook image of Trudeau in brownface, from 2001, when he was a teacher in a posh Vancouver private school. On the tarmac in Halifax, Trudeau told reporters that he was sorry. “It was something that I didn’t think was racist at the time. It was a dumb thing to do. I’m pissed off at myself.”

He also said that there was another image coming. “The fact of the matter is that I’ve always — and you’ll know this — been more enthusiastic about costumes than is sometimes appropriate.”

By the time the sun rose, two similar pictures and a short video had surfaced. This was something Trudeau did several times, well past the time when anyone thought this kind of thing was OK. When he was a teacher, someone setting an example for students, he had behaved in a way that he ought to have known was insensitive and hurtful.

In the Liberal war room, where they had been feeling great about the first week, they must have watched with horror when Jagmeet Singh appeared on their TVs to make a powerful short statement.

“When I was growing up, I fought racists. I dealt with them myself and I fought back. But I got a message from a friend and it reminded me that there were a lot of people who couldn’t do that, that couldn’t fight back, who didn’t have the ability to do that.”

Singh paused, looked down, trying to control his emotion.

This election will be the first where millennial voters outnumber baby boomers. The electorate is younger, and more diverse than it was in the last election. According to the 2016 census, 22 per cent of Canadians are visible minority, with a median age of just 33. This is the future of Canada, not just in the country’s multicultural heart, downtown Toronto, but just about everywhere.

Trudeau has put diversity at the heart of his government, making a strong argument to those voters. His argument got much weaker on Wednesday night, and Singh’s argument—that he can be their champion—got a hundred times stronger.

If this shifts the momentum in the way that I expect, the NDP will suddenly be competitive in urban seats that looked like safe Liberal holds, and Conservatives can hope for the splits they need in the suburbs.

And Trudeau looks so embarrassing, so hypocritical and shallow, that he will surely struggle to lead his increasingly disheartened team to the finish line, desperately warning voters that they have no choice but to vote Liberal because of the racists in the Conservative party.

And this time, he can’t promise that this will be the last election under first past the post.