Jody Wilson-Raybould has Trudeau in checkmate

Andrew MacDougall: If the former AG adds credible colour to the story being told by anonymous sources this week, it will be a devastating day for Trudeau 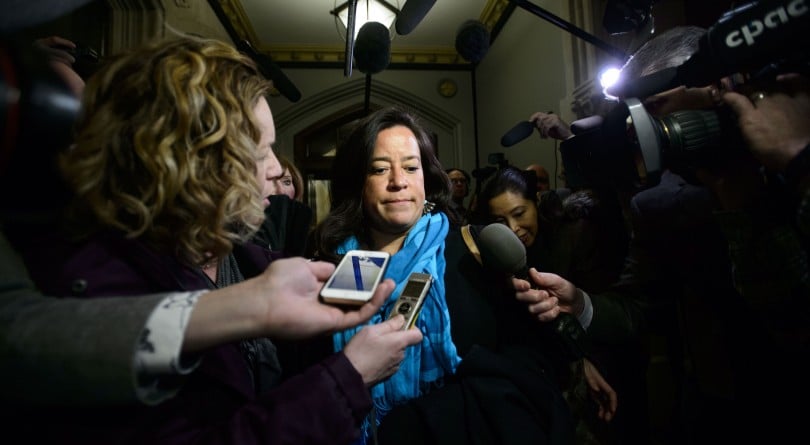 Wilson-Raybould arrives to a caucus meeting on Parliament Hill in Ottawa on Wednesday, Feb. 20, 2019. (THE CANADIAN PRESS/Sean Kilpatrick)

“Is Jody Wilson-Raybould going to burn my government to the ground?”

It’s the question Justin Trudeau must surely be asking as his former attorney general and justice minister prepares to “speak her truth” this week at the justice committee on the question of SNC-Lavalin.

If the dribs and drabs of information appearing on the front pages of The Globe and Mail over recent weeks turns out to be accurate foreshadowing, Trudeau might not be able to survive Wilson-Raybould’s truth, let alone handle it.

As “did not direct” Wilson-Raybould has morphed into a “vigorous debate” on the question, and then to an admission of “pressure” from the Clerk of the Privy Council, but of the “lawful advocacy” kind, not the ‘do as you’re told’ vintage, Team Trudeau has, to date, succeeded only in lighting itself on fire when it comes to SNC-Lavalin. Now it’s time to see if Wilson-Raybould rocks up to committee with the final keg of kerosene.

If you’re Trudeau, it’s hard to envision an appearance in which Wilson-Raybould doesn’t burn everything—Trudeau included—to the ground.  There has been some serious red-on-red action on the nation’s front pages in the past few days, and only one side can survive.

READ MORE: A way out of this mess, maybe

Wilson-Raybould and the forces aligned with her have been putting out a narrative of undue pressure on the non-partisan attorney general over the criminal prosecution of SNC, a Liberal-loving Quebec behemoth. And they’re making a compelling case.

Despite the independent director of public prosecutions saying ‘no’ to SNC on Sept. 4 of last year, Trudeau, his office, and the clerk—we now know, after initial denials—continued to revisit the issue with Wilson-Raybould and her office until Dec. 19, i.e. a few short weeks before she was shifted out of the attorney general role. It turns out ‘no means no’ meant nothing in Trudeaupia, at least when it came to SNC.

Meanwhile, the Liberal government and its surrogates—which now include Michael Wernick, the Clerk of the Privy Council—are pushing a narrative of internal discord over Indigenous issues as the reason for the January change in Trudeau’s ministry, in the hope Wilson-Raybould’s shift to Veterans can be seen in a light other than her strict and repeated refusal to play ball on SNC.

It’s the same narrative the PMO has been pushing since the original Feb. 7 bombshell from the Globe. Only instead of pursuing it through crude and anonymous comments about everything being “Jody-centric”, it’s now coming out in more substantive terms.

Wernick was careful to place the Prime Minister’s Sept. 17 conversation with Wilson-Raybould on SNC within a broader cabinet conversation between the PM, Wilson-Raybould, and Carolyn Bennett—the minister of crown-Indigenous relations—on Indigenous rights. Word is now going around Ottawa that the Dec. 4 meeting between (the now-departed) Gerry Butts and Wilson-Raybould was principally about Indigenous files, with a little SNC on the side. Wernick also said Indigenous files were on the agenda of his Dec. 19 call with Wilson-Raybould, albeit the one where he also confessed to letting her know many of her cabinet colleagues were (still) worried about the economic impact of the SNC prosecution (as if she didn’t already know).

The one meeting we still don’t know much about is the one that might hold the key—and produce the most fireworks at Wilson-Raybould’s testimony: the Dec. 18 meeting between the PMO’s Gerry Butts and Katie Telford and Jessica Prince, Wilson-Raybould’s Chief of Staff. Wernick mentioned it briefly, but the PMO didn’t offer up any information on the substance of their conversation when media outlets started asking questions about it. But if their chat wasn’t about SNC, it stands to reason the PMO would have said so in order to shut down another unwanted avenue of inquiry.

Which isn’t to say we’re all out of shut down in this town.

Despite asking his current attorney general weeks ago for advice on whether he can waive solicitor-client privilege or cabinet confidentiality, Trudeau still has yet to signal which version of Wilson-Raybould we’ll see at committee Monday: the one who is free to speak her truth, or the one still bound by the ties of her former roles.

At this point it might not even matter. So much of what was apparently subject to both claims has now been aired either on or off the record by either side. For his part, Wernick didn’t think Wilson-Raybould was bound. It will be interesting to see what Thomas Cromwell, Wilson-Raybould’s counsel, has advised his client. One reckons it will be apparent the minute Wilson-Raybould opens her mouth at committee.

We’re now—hopefully, anyway—at the precipice of knowing those reasons. If Wilson-Raybould adds credible colour to the skeleton version of events outlined by the anonymous sources in the Globe it’s going to be a brutal day for Trudeau.

And if Wilson-Raybould backs up her claims up with physical evidence (she is reputed to be a copious note-taker), or offers up a witness or two who can offer supportive contemporaneous accounts (hello, Jessica Prince!), it’s going to be cataclysmic. Who knows, if the Dec. 18 meeting is indeed the one in which Butts told Wilson-Raybould to take matters up with the Clerk, it would mean Wilson-Raybould was prepared to be leaned on by Wernick over SNC in their call the following day. A penny for a tape of that conversation, anyone?

If it does prove to be the darkest day for Team Trudeau, the Liberals will be forced to contemplate what—and who—comes next. After all, if Gerry Butts, Katie Telford, and Michael Wernick are all telling an independent attorney general to go one way on an open criminal prosecution like SNC, it’s hard to paint the picture that it wasn’t with Trudeau’s knowledge, or at Trudeau’s request. Trudeau would find it very hard, if not impossible, to recover.

At best, Trudeau would be hanging by a very thin thread. If Butts had to walk over “pressure” on SNC, what does that mean for Telford should Wilson-Raybould credibly accuse her of the same? And what of Wernick, who told the committee he was sure Wilson-Raybould was feeling the pressure to “get it right” before implying to her that her caucus colleagues were still worried she had it wrong.

The level of nervousness in the PMO right now cannot be overstated, as evidenced by a series of leaks over the weekend designed to evacuate damaging disclosures (disputes over judicial appointments & the admission that Telford met with Justice on SNC). The ground is being prepared for everyone but Trudeau to have to go.

Even then, Trudeau’s continued presence in the Prime Minister’s Office would be a stretch. People might buy that Trudeau’s aides and his deputy minister were a little overzealous in making SNC’s case. But they won’t buy that anyone other than Trudeau agreed to tuck SNC’s preferred legislation into the Liberal budget, or forced Wilson-Raybould out of her post as attorney general, because only the Prime Minister has those powers.

It makes you wonder about the Wilson-Raybould end game. Is it simply a matter of principle, as she said in her letter on the day of her departure from the ministry of justice? Is it about shifting the Indigenous settlement to her satisfaction, with Trudeau the necessary collateral damage? Or is it about grabbing the brass ring?

If so, it’s hard to see how that could work.

Could the cloud cover over sunny ways make for a viable alternative for Liberals, most of whom were elected because of Trudeau’s coattails? Or would they shudder at the thought of serving for Canada’s version of Frank Underwood?

It remains to be seen. At this point, Trudeau would like an ending as far away from House of Cards as possible. Right now, he’d much rather prefer a Newhart, one where he wakes up and none of this ever happened.