'Let’s have medical personnel in charge and not bureaucrats'

Letters to the editor, April 28, 2021: Readers weigh in on 'Year One,' the most comprehensive reporting of Canada's COVID-19 response, the social ills caused by capitalism, the portrayal of Jordan Peterson, and more 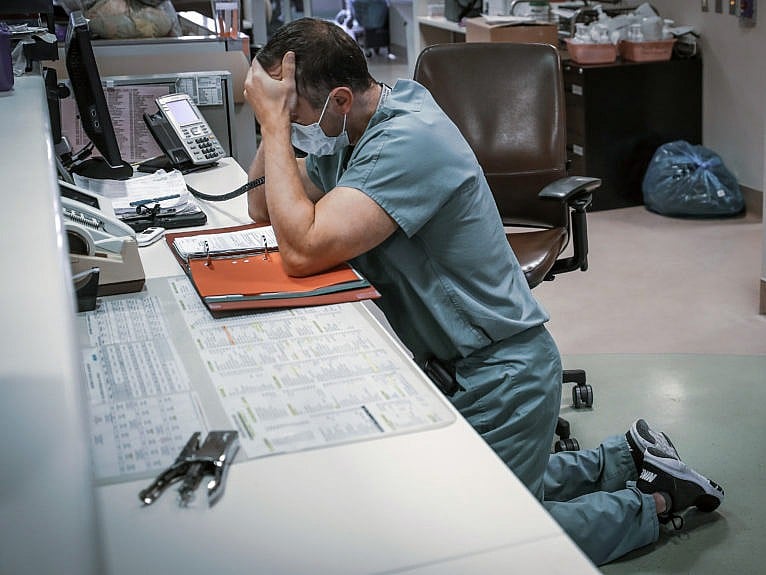 Dr. Simon Demers-Marcil, an ICU physician in Calgary, calls a family to tell them a loved one has died of COVID-19 (Leah Hennel/AHS)

Our April issue featured a 22,000-word story by Stephen Maher detailing what went wrong and what went right with Canada’s handling of COVID-19

Thank you for the wonderfully comprehensive coverage of the COVID-19 pandemic (“Year one: An unprecedented report on Canada’s mishandling of the crisis of the century,” Cover, April 2021). This edition of your magazine should be required reading for all Canadians.
—Rick DesBrisay, Moncton, N.B.

Your cover for this issue was enough to make me immediately send the magazine to recycling. However, I leafed through it and found several positive articles among the negative ones. It’s a little late now, but your cover title should have eliminated the three-letter “mis” and emphasized how Canada handled the crisis.
—Antony Merry, Sidney, B.C.

The only way to make amends for the abominable treatment of people in many long-term care homes is to make the changes that have been recommended so often in the past. If we must, we should take the homes into provincial ownership and provide good air and good care. But let’s have medical personnel in charge and not bureaucrats. Soon baby boomers will be overcrowding those same homes. Let the elders’ deaths not be in vain.
—Ruth MacBean, Burlington, Ont.

I have to thank Maclean’s for putting together “Year One.” The more I read, the angrier I got with the politicking and half-measures and the complete incompetence from all our federal agencies. And let’s not forget the ineptitude of Justin Trudeau and of our own incompetent Jason Kenney here in Alberta. But my anger really roiled when I read about the total failure perpetrated on our seniors living in long-term care facilities, and the lack of any morals of the operators of those facilities. The only care they gave was to their shareholders and lobbyists.
—Wayne Cornish, Calgary

I am appalled at the incompetence of the Trudeau government on vaccine procurement. While other countries got their acts together last year, either by negotiating strong and early contracts with manufacturers (e.g., the U.S. or Israel) or by setting up domestic manufacturing capability (Australia), the Trudeau government wasted precious months chasing a UN Security Council seat and, astonishingly, pursuing a Chinese vaccine. We are months behind the U.S. The health, social and economic costs of that gap are incalculable. Our federal government has badly failed us.
—D.R. Thomson, Howe Island, Ont.

I am still reading the amazing COVID-19 issue of Maclean’s—excellent reporting, and the photos moved me beyond words. The only thing missing is the story about how the pandemic has highlighted some important issues in our public education system. Teachers are frontline workers who, for some reason, are not given the same consideration as “experts in their field” that doctors and nurses receive in health care. The voice of teachers has had limited press this past year. We have missed out on the incredible stories of teachers finding creative ways to engage and teach our children within ever-changing restrictions and guidelines.
—Lana Durst, Toronto

Every issue of Maclean’s features tributes to those who have died of COVID-19 in Canada. Read them online here.

I recently subscribed to your mag­a­zine and was moved by your efforts to publish the obituaries of those who were victims of the pandemic (“They were loved,” Coronavirus, March 2021). I felt this was a thoughtful and respectful endeavour. Kudos to Maclean’s for handling a deeply sensitive and personal matter. Memorializing them, I hope, will provide some solace to the bereaved. It was moving to read some of the profiles. No one could have envisioned this calamity, which only manifests how vulnerable we all are. When there are so many other threats to our health as we age, who could ever have anticipated this outcome. It seems so unfair.
—Andy Birch, Stettler, Alta.

Will we have the mettle?

In January, Shannon Proudfoot delved into the fight to bring back the two Michaels detained in China.

With neither country willing to budge from their entrenched prisoner-based hissy fits, it seems that Michael Kovrig and Michael Spavor are stuck in China for a long time yet (“A promise to Michael,” Diplomacy, February 2021). Why then are Canadians not yet considering a boycott of the Beijing Olympic Games? Are we really going to send our best athletes to help bolster China’s self-image when they’ve effectively kidnapped two of our citizens? With the lack of outrage here in Canada among regular people, I hope that one or more of the athletes decides the risk, and the implied acceptance of Chinese tactics, is unacceptable, and that a unified pushback starts from there.
—Chris Winters, Kitchener, Ont.

Science to the rescue

In March, Christina Frangou explored the backstory of mRNA, the biotechnology that made COVID-19 vaccines possible, and the dogged scientists who defied the odds.

I would like to congratulate Christina Frangou on a great article about mRNA and COVID-19 vaccines (“Shooting the messenger,” Science, March 2021). She has done a fantastic job describing the mRNA vaccines, capturing all the pieces that came together to make a new style of vaccine, and along the way giving a gripping account of the challenges faced by scientists around the world to support and advance their work, and the science behind so many complex biological systems.
—Penny Moody-Corbett, Ottawa

In March, Andray Domise took a look at the connection between capitalism and society’s current ills in a column.

Andray Domise’s column about social conditions under capitalism resonated within me (“The death of better things,” Sociology, March 2021). As a member of Generation Z, I am acutely aware of my future in unaffordable housing and working unfulfilling jobs for a corporation that couldn’t care less about its employees. Youth represent the future of Canada, but our hopes for this future are dimmed by the bleak reality of capitalism. I currently attend a high school specializing in the arts, but hardly any of my peers are actually considering a pursuit of their dreams involving the arts. What’s the point? Under capitalism, profound artistic expression has been distorted into meaningless, commodified products manufactured to appeal to as many consumers as possible. Additionally, an independent artist lacks the financial means to sustain themself in a society where human rights must be purchased. This need for money has barred us from doing anything fulfilling with our lives, and instead forces us to be cogs in the capitalist machine. The status quo must change. We must imagine and manifest a better alternative in order to put an end to this perpetuating cycle of exploitation and oppression.
—Isabelle Li, Markham, Ont.

Domise has written the most miserable piece I have ever read! My parents went through two world wars and the Depression, none of which was any fault of their own. But they didn’t give up; they made the best of what they had. The saddest thing about today is that people have lost control of their lives. They’ve been so manipulated by this techno age they have lost their individuality, and in the herd society they have become pawns of politicians, social media and the economy. They don’t realize that it’s the ordinary Joe who makes the world go round, and none of these other entities could survive without them, their labour and their paycheques. I may be 83 years old but I can still see the wonders of this great country we live in and I am forever thankful to be here.
—Marcheta Leoppky, Dawson Creek, B.C.

In March, Brian Bethune wrote about the clash between publishers and their employees in wake of controversial academic Jordan Peterson’s latest book release.

In Brian Bethune’s article, certain among your fearsome readers are courted while book purchasers by the millions are worthy of no respect (“12 rules for publishing Jordan Peterson,” Society, March 2021). Bethune’s understanding and portrayal of Peterson—in parallel with the vacuous objections of some Penguin Random House Canada employees—is informed by his chattering circle, and is insulting. I am likely representative of the majority of Peterson’s readers/listeners. My education includes seven years of university, three degrees and a professional career among academics. I am well-read, discerning and able to defend my thoughts. Using his cartoon-journalism training to label us “fans” and diminish serious research, deep understanding and sincere debate among many thousands of students, Bethune presents a condescending and superficial rendition of an astute, respected and heroic thinker.
—Steve Swenson, White Rock, B.C.

I have to question what “diversity” and “inclusion” mean if people are protesting the publishing of Peterson’s book. I thought diversity meant divergent political ideas? Or does it mean strictly racial diversity? And to what end? Are we to assume that Peterson, as a white male, does not qualify as a diverse opinion? And why not? If we want to be a nation of diversity and inclusion, we ought to put our money where our mouth is and actually encourage opposing opinions. Not to mention our Charter rights under Section 2(b) that protect freedom of expression, thought and belief.
—Allison Grande, Toronto

In March, Terry Glavin wrote about how the rescue of the orphan ‘Amira’ has raised pressure on Ottawa to take back other children of Canadians who fought in Syria for ISIS.

I was shocked, disappointed, but not really surprised when I read Terry Glavin’s article about ISIS-affiliated Canadians citizens in Kurdish custody, which some are calling “Canada’s Guantánamo” (“Bring them home,” Analysis, March 2021). I was shocked at Trudeau’s casual abandonment of these people and particularly the children, and disappointed because he is officially speaking for all Canadians and showing a disturbing lack of compassion. Again, I am not surprised because for 150 years most of our churches, our justice system and our politicians have followed a similar policy dealing with First Nations by means of residential schools. I agree with Erin O’Toole that we should bring the children and their surviving parents home and prosecute the appropriate parents under Canada’s terrorism laws. After all, they are innocent until proven guilty.
—Mike Kroecher, Charlie Lake, B.C.

In March, Michael Fraiman told the tale of giant paw-prints found in Northwest Territories and the debate that ensued.

In your story on the giant paw print left by a wolf in the Northwest Territories, you quote wolf expert Dean Cluff as saying, in effect, that if wolves knew how weak we are, they would attack us more often (“My, what big paws you have,” Northwest Territories, March 2021). I for one am convinced that half the reason the human species has survived for so long is because we’re probably not very good eating in the first place.
—Mark Nielsen, Prince George, B.C. 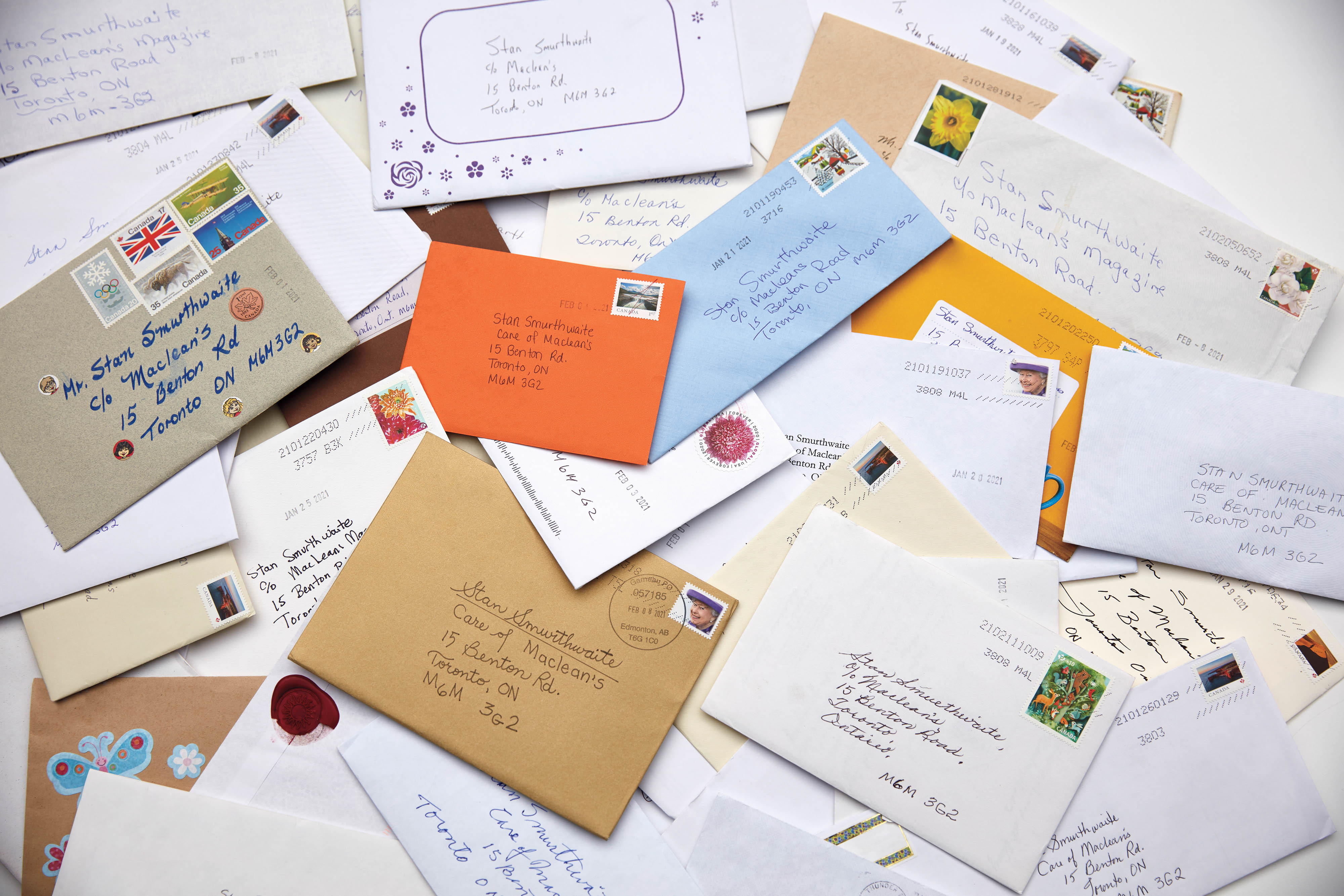 Last spring, reader Stan Smurthwaite wrote a letter to the editor, responding to a Maclean’s column about mail. His point: the loneliness of an empty mailbox.

Readers wrote to him in droves; he wrote them back. Maclean’s associate editor Marie-Danielle Smith wrote a story about the deluge: more readers, more letters. Here’s an image from our mailroom, taken before the most recent avalanche of Stan-bound mail. It will surprise no one to learn that Mr. Smurthwaite, gracious as ever, has written to thank us for the story.