Local restaurants are closing for good. Here's what we'll miss.

Corey Mintz: The closure of local, neighbourhood-focused, independently owned restaurants is going to leave a hole in our lives 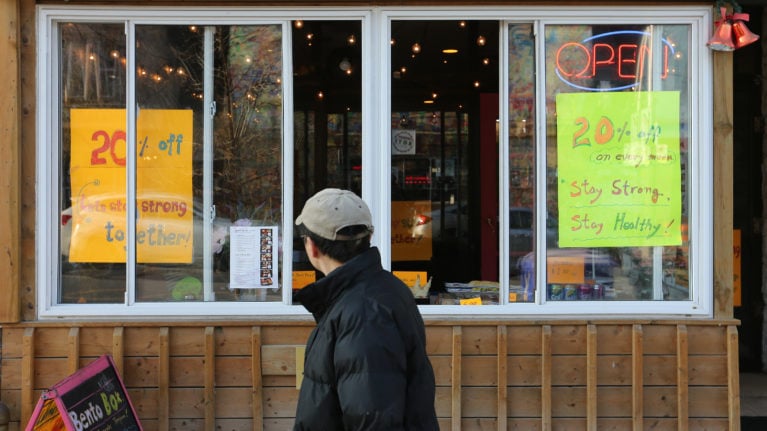 Restaurants are offering take out and delivery only as only essential industries are open as the province tried to slow the spread of COVID-19 in Toronto. From Mar. 24, 2020. (Steve Russell/Toronto Star/Getty)

Every day I speak to restaurateurs who have closed their businesses. From Toronto to Montreal, San Francisco to Baltimore, the COVID narrative of restaurants is similarly grim: employers are not positioned to pivot to takeout, unable to stay afloat on the fraction of revenue that delivery sales bring in, minus the 20-to-30 per cent commissions of predatory tech/delivery companies, or unwilling to risk their workers’ health for any of this. They’re left with no choice but to lay off their entire staff and walk away from their lives’ work. It’s heartbreaking.

And while Canada is acting quicker to leave restaurants in a better position than their U.S. counterparts—rolling out the CERB ($2,000 a month for workers) on Mar. 25 and CECRA (75 per cent support for commercial rent) on Apr. 24—these actions will only mitigate the carnage. Jobs will be lost, businesses shuttered and dreams ended. And much of this is permanent.

According to a recent survey from industry lobbying association Restaurants Canada, 10 per cent of closed restaurants will not reopen, and an additional 18 per cent of their respondents say that if the current conditions persist another month, they will also close for good.

MORE: How food supply disruptions from COVID-19 are leading to higher prices for consumers

In a post-isolation, pre-vaccine economy, restaurants will continue to face a mercilessly uphill environment. Continued social distancing will likely force dine-in restaurants to operate at limited capacity, making it all but impossible for the narrow-margin industry to maintain profitability without diversifying their offerings. And they’ll be competing for customers during an inevitable recession.

“It’s going to be hyper-competitive over the next year to two,” says food industry advisor Robert Carter of StratonHunter Group.

He predicts a future with fewer independent restaurants, their empty real estate snapped up at discount rates by chains with sufficient capital. And those that survive will not be able to keep operating the same way.

“We’ll definitely see less bricks and mortar locations. Even the ones we do see will have smaller footprints,” Carter adds. “The days of the 10,000-square-foot Boston Pizzas—those days are done.”

Businesses that survive off breakfast or dinner alone will have to redefine themselves and develop multiple revenue streams. For a lot of chefs and owners, who have focused on doing one thing well their whole adult lives, that won’t be possible. For some independent restaurateurs, retirement was already around the corner. But that doesn’t make the loss hurt less.

“How are you gonna rebuild this?” asks Ettore Pugliese, owner of Vesuvio Pizzeria & Spaghetti House in Toronto, which opened in 1957 and is now permanently closed. “I’m 81 years old. I don’t want to start again. I’ve been at it for 63 years—I’ve had enough.”

Pugliese, who started the business with his father and brothers, was hoping to leave some part of it to his daughter. Now there is nothing left other than the cases of wine, kegs of beer and frozen foods that suppliers won’t take back.

And their memories. Like the most loyal customer ever, who ordered the same exact pizza—a 14-inch medium deluxe, with pepperoni, mushrooms and green peppers—every day for 25 years. Or David Miller, a regular, first as city councillor and then as mayor.

“He would come in once a week with his family,” remembers Piera Pugliese, Ettore’s wife. That is until Miller gave up carbs. “All of a sudden there was a dropoff,” she recalls.

The closure of restaurants like this—local, neighbourhood-focused, independently owned (often by immigrants)—are going to leave a hole in our lives. These are our gathering spaces, our rest stops.

While Starbucks has so smartly marketed their identical storefronts under the concept of a “third place,” a default hangout location between home and work, these restaurants were just that. Not by design or guile, but because that was their reason for existence. The owners needed to make a living and the neighbourhood needed a place to get together and eat.

What we’ll miss more than the thickness of their pizza crust or some mysterious ingredient in their chili oil, is how they made us feel. Because restaurants aren’t just a place to get food. You can buy food from a grocery store, the farmers’ market or by delivery from the many restaurants, which are currently being hollowed out into ghost kitchens, their dining rooms and fancy menus collecting dust as the businesses shift to pumping out endless ramen kits and breakfast burritos. What you can’t buy is community.

“Locally owned small businesses often have a different and deeper relationship to their community,” says David Miller. “The best help build community; implicitly recognizing that the economic and social success of a neighbourhood is their success too.”

Yes, we will miss someone remembering our name, welcoming us back, knowing our regular order. But what will really hurt is the loss of that feeling that our fates are all tied together—that we belong. That spark you get when you see that a family has opened up a little restaurant in your area, the rooting-for-the-underdog joy that the neighbourhood just got a little better, the actual feeling that you are in a place that feels safe, around people who care for each other.

Those moments, feelings and places are irreplaceable.