Max Fawcett: The only place where the environment isn't a higher priority than the economy is—you guessed it—the Prairies 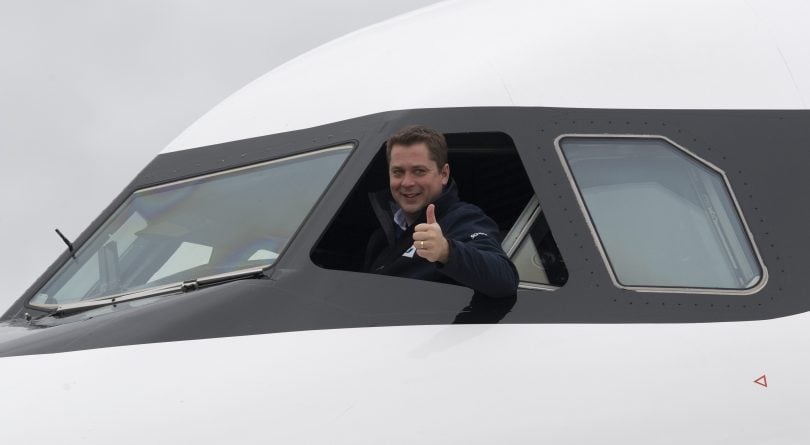 Conservative leader Andrew Scheer gives the thumbs up from the cockpit of his campaign plane in Fredericton, Oct. 18, 2019. (Adrian Wyld/CP)

This summer, federal Conservatives will gather in Toronto during Pride Week to pick the next leader of their party. And while the timing might seem to be an unforced error, given the previous leader’s unwillingness to march in the annual parade, it could actually be a form of insurance. After all, the party appears to have gotten the message about the importance of finding a leader who isn’t conspicuously uncomfortable with ideas like same-sex marriage and abortion rights for women, and the date of the leadership vote should serve as a useful reminder for anyone who didn’t.

But it’s less clear that the party’s leaders understand how out of step its position on climate change is with the general public.

In the 2019 election, more than six in 10 Canadians cast a ballot for parties that support the idea of a carbon tax. That proportion is unlikely to decrease in the next election as more young people—inspired perhaps by Greta Thunberg’s activism or images of the damage caused by Australia’s bushfires—become eligible to vote for the first time. And according to a recent Nanos Research poll published in the Globe and Mail, more Canadians ranked the environment as their top issue (35 per cent) than the economy (25 per cent). The only place where the environment wasn’t a higher priority than the economy was—you guessed it—the Prairies.

And yet it appears that Andrew Scheer and his team of advisers still believe that they can sell Canadians on a climate plan they already rejected. Scheer and his online proxies continue to trade in the idea that the best way for Canada to reach its Paris Accord targets is by supporting technology and innovation. In an interview on David Herle’s podcast, former campaign manager Hamish Marshall said that “If we’re going to do anything to reduce the amount of carbon dioxide going into the atmosphere, I believe fundamentally it will come from better technology and finding ways to encourage that better technology to be developed.”

Never mind, for the moment, that carbon pricing is a highly effective way to encourage that development—precisely the kind of “innovative, market-based policies” that Scheer himself said would “make a real impact on global emissions.” The bigger problem is that this sort of thinking places a degree of faith in as-yet-undeveloped technologies that cannot be justified by the available evidence.

In fact, it’s reminiscent of an early episode of “South Park” that aired in 1998, when it was in its second season. In it, a group of so-called “underpants gnomes” set out to collect underpants from local townspeople as part of a plan to make money. Their business plan, they said, is simple: “Phase one, collect underpants. Phase two…Phase three, profit!”

MORE: Who wants to be Conservative leader?

At the time, it was intended as a mockery of the non-existent business plans behind so many tech companies during the first boom in the late ’90s and early 2000s, when they had little more than an idea and no sense of how to actually commercialize it. Right now, it also does an awfully good job of representing the Conservative approach to dealing with climate change. They claim to want to address climate change, and believe that technology is the way to do it. But forget the math on how they get there not adding up; there’s almost no math at all.

The math they do have has already been proven incorrect. Conservatives have latched onto the idea (one that the Liberal government has also pushed) that Canada can get emissions credits for its exports of liquefied natural gas, on the premise that said exports would displace higher emitting coal-fired electricity. Article 6 of the Paris Agreement does allow for voluntary international cooperation that would help countries meet their targets, although the parties have yet to agree on how this would actually work.

But as the Ecofiscal Commission’s Jason Dion wrote in Policy Options back in June, anyone who thinks Canada will be able to get credit for emissions reductions associated with LNG exports is engaged in wishful thinking: “Canada would be asking for a benefit (in the form of a credit toward its GHG reduction target) in exchange for something that the foreign business is already paying the market rate for.”

In the last election, Conservatives made a bet that Canadians wouldn’t care about the fact that their climate plan didn’t take the issue seriously. Now, as they begin the conversation about who and what they want in a new leader, they’ll need to decide if they’re going to double down on that bet. That seems like a virtual certainty based on the results of a recent Abacus poll, which showed that only 18 per cent of core CPC supporters say a serious climate plan is a “must have” for a new leader. It also seems risky, given that nearly half of those who lean Liberal—and who might be inclined to vote Conservative in the right circumstances—said that credible climate policy is table stakes for them.

That’s why it might be time to cut the losses they already have rather than risking even bigger ones in the next election. They could embrace carbon pricing, a market-oriented solution to climate change that Conservatives used to like, and use the proceeds to reduce personal and corporate income taxes. They could support regulations that, while more expensive, would spare them the indignity of having to backtrack on years of anti-tax rhetoric. Or they can continue to behave like “South Park’s” underpants gnomes and pretend that technologies that don’t exist today will somehow save us from tomorrow.

The choice they make on June 27 will go a long way towards deciding what the next election will be about—and who ends up winning it.