Andrew MacDougall: While the world is shutting down to fight a pandemic, why is Peter MacKay plowing ahead with his Conservative leadership bid? 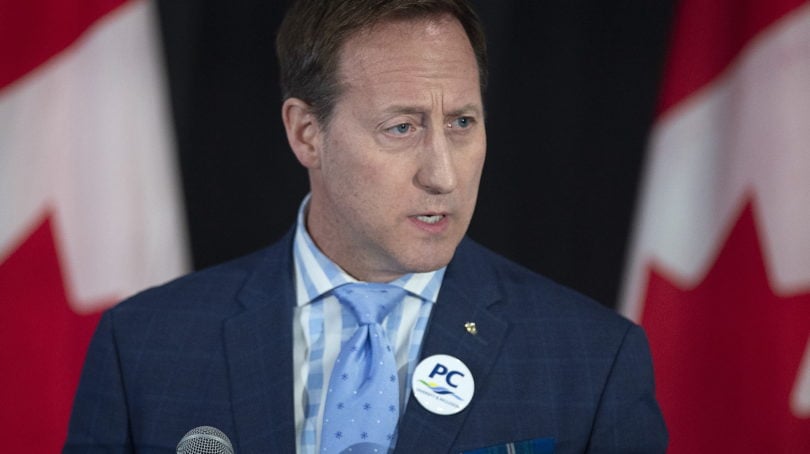 MacKay addresses the crowd at a federal Conservative leadership forum during the annual general meeting of the Nova Scotia Progressive Conservative party in Halifax on Feb. 8, 2020 (CP/Andrew Vaughan)

Has Peter MacKay lost his mind?

To be fair, lots of people are losing it over the coronavirus. But only Peter MacKay is losing it by losing sight of the virus itself. MacKay is literally the only Canadian pretending the virus isn’t upending absolutely everything. “Elections Canada is preparing for an election. We should be too. The leadership race cannot be delayed,” MacKay tweeted last night.

Where to begin? To call it tone deaf would be to insult every failed Canadian Idol contestant, even the guy who didn’t make it out of the parking lot in that audition in Whitehorse in 2005. To call it stupid would be to elevate Donald Trump to Mensa heights. It would be the single most ratioed tweet ever on Twitter if only people could be arsed to ratio Peter MacKay.

“Cannot be delayed.” Really? Because everything else is. Entire countries are on lockdown. Sports leagues the world over have halted their games. Even the extraordinarily bent IOC have straightened out, seen the light, and postponed this summer’s Olympic games in Tokyo. And we’re meant to believe the Conservative Party leadership is the one thing this world cannot do without in this time of extreme stress? What does MacKay think he is? Booze? Netflix?

Meanwhile, out here in the real world, just short of a million Canadians applied for EI last week as entire industries shut down. Emergency rooms are seizing and vital supplies are running out because we’ve given some of our stores away to China (without getting a Spavor and Kovrig in return). The Trudeau government, supported by the opposition, has just rushed an $82 billion relief package through the House and Senate. The Health Minister is even mandating isolation under the Quarantine Act for people returning from abroad. Things could not be more real.

And into this tornado of serious blows MacKay’s tweet. Memo to Peter: the only thing people should be preparing for now is the long, tough road ahead. You know, the one people have been stripping Costco shelves to provision for. That’s right, this is an eight litre ketchup emergency.

Could it be that MacKay actually thinks Elections Canada and Justin Trudeau are secretly plotting a trip to the polls? If so, to do what? Capitalize on their immense and entirely unseen polling lead? Use the worst economic shock since the Great Depression to cynically try for a majority government? You might think poorly of Trudeau and his team but they’re not suicidal. Well, other than Pablo Rodriguez, who thinks now is the time to cry for Bombardier while posting heroic pictures of himself on Twitter. And, sure, Team Trudeau did go a bit crazy with their ill-thought out grab for emergency powers, but the strong opposition to that overreach forced a quick climbdown.

And you know who did that? Some people named Andrew Scheer, Candice Bergen and Pierre Poilievre, among others. That’s right, despite Peter MacKay’s insistence there is some immediate must-fill void, there are actually people in Ottawa minding the store. And those people will continue to work no matter how long the Conservative leadership race ends up taking.

To which MacKay might rebut: yeah, but Ryan Leef thinks I’m really hot sh*t. Oh wait, he actually did say that. That’s right, as a selection of Parliamentarians stayed up all night debating an epic relief package (while staying 2m apart at all times), somebody in Team MacKay looked at the rollout calendar and thought yesterday was the day to finally wheel out the coveted Leef endorsement. And no, Googling ‘Ryan Leef’ won’t make you care any more than you already don’t.

The new pedal-to-the-metal approach from Team MacKay says one of two things (and maybe both): they’re worried about Erin O’Toole over the longer haul (O’Toole has asked for a pause); or 2) they think the entire Conservative Party membership is made up of those dolts who were still out partying on Florida’s beaches for Spring Break.

Either way, pushing for a speedier conclusion no matter the circumstances gives MacKay the appearance of putting himself before both his party and his country. Which doesn’t ring true to the Peter MacKay that I worked with over a few years in Ottawa. And while it’s fair to say our PMO didn’t always see eye-to-eye with MacKay and his team, we at least spoke the same language. The 2020 version is now speaking in lunacy, if not outright tongues.

So what’s going on?

I reckon MacKay is now doing and saying what he thinks the party membership wants to hear, not what he thinks actually should be done. Either he or his advisors have been spooked into this new course after spending the first half of the leadership campaign appealing to the broader Canadian population and watching O’Toole gain momentum with the voting membership.

The new MacKay reminds me of Michael Ignatieff during his time as Liberal leader. ‘Iggy’ never looked comfortable as a politician. It always appeared he was playing a role, doing what he thought a politician would say or do at any one moment, not what actually needed to be done. And so it is with Mackay 2.020.

And while the party also appears content to keep partying like it’s 2019, both it and MacKay need to be mindful of chasing a Pyrrhic victory. A new leader does no good if he’s burnt like toast. Right now, Canadians are concerned about making it through a global pandemic. Moreover, they will remember the people, businesses and organizations who tried to continue on as if nothing happened. They will remember the people who lost their minds.