Peter MacKay vs @PeterMacKay: A showdown for the Tory leadership 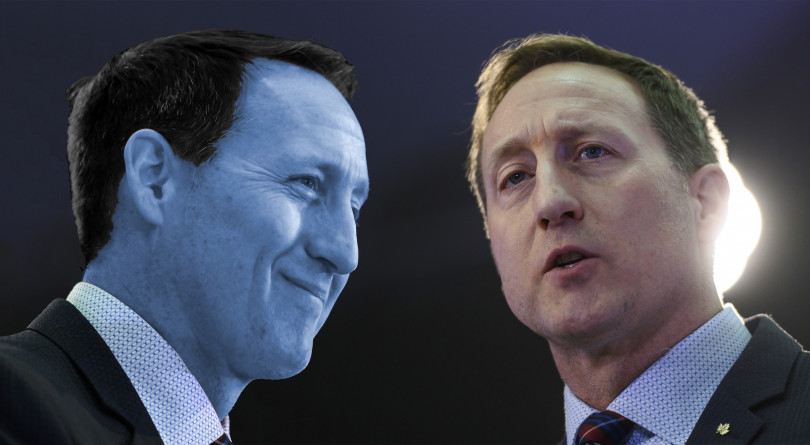 Even as he slouches towards Conservative leadership Bethlehem, Peter MacKay is fighting a war most of us cannot see and none of us could ever hope to understand. I am here to tell the story of MacKay’s battle against a nemesis of his own creation. I seek to preserve some record of the terrible and historic struggle being waged in our very midst between Almost Certain For Reasons Nobody Can Quite Put Their Finger On Conservative Leader Peter MacKay and his nemesis, @PeterMacKay, his apparently sentient and rogue Twitter account.

On Feb. 1, @PeterMacKay up and sent out a tweet that included images of Prime Minister Justin Trudeau in different yoga poses. The caption complained that “while running for leader of the Liberal Party, Trudeau’s campaign expensed $876.95 in yoga sessions and spa bills for Justin Trudeau. Liberals can’t be trusted.”

It is (it’s still up) a very silly tweet, as many were quick to point out. It’s hard to pass off $876.95 for some yoga classes and perhaps the odd massage or health club visit, seven years ago, as political dynamite. In fact, it would be charitable to believe that @PeterMacKay sincerely thought the sum itself would whip Canadians into a frenzy, but the sum itself wasn’t the point, of course.

The subtext of the tweet was painfully obvious: Trudeau’s not butch enough for what is essentially an only slightly glorified office job. Unlike Peter MacKay, who recently boasted to the National Post that he’d “rather fight” Trudeau, who famously boxes, “UFC rules. Or on the ice—no headgear, no gloves.”

Why not just scrap this whole democracy thing and go beer pong, Peter? The most obvious explanation for the anti-yoga tweet is that some social media person messed up, and keeps messing up, and I’ve always thought of the famously ineffectual, universally wrong Peter MacKay less as a “TOUGH-ON-CRIME ARCHITECT” and more of a Disappointed-in-Malfeasance Interior Designer. It would be easy to write @PeterMacKay off as a very modern “trouble with the help” problem.

It is, after all, the great, universal social media hire dilemma. From the moment you post the social media manager job listing, you are Odysseus, MP for Ithaca West navigating between Scylla and Charybdis. By its nature, a job in social media requires the services of someone who is often online, but give the job to someone who is Very Online, if you’ll excuse the Very Online expression, and all will be lost.

Fail to thread the Internet needle one way, and your campaign (or brand or cause, as the account may be) will be sucked down to drown in a reply vortex of confusing memes, deft dunks and “OK Boomer”s. Fail in the other direction and you end up with an online presence run by someone convinced by far too much time on Twitter that over 80 per cent of potential Canadian Conservative voters are men between the ages of 35 and 135 who think that calling Justin Trudeau Justine Trudeau is the height of wit because he is so bad he is practically a woman! Do you get it? Justine!

“Get the ‘Book me a room and hold onto your hats, I have a bit where I call Justin Justine that’s going to kill!’ crowd onside and your victory is assured!” a very online CPC social media manager might tell you. “My tweet where I photoshopped Trudeau to be fronting Josie and the Pussycats and tagged it #TrueDOPEandtheLIEberals got 43 retweets and there can’t be more than what, 75 people in Canada, right? We can’t lose!” But I and now you, reader, know that mere miss-hire is not what happened to our Peter MacKay.

RELATED: For the Tories, Peter MacKay is more than just a face in the crowd

When asked, Peter McKay has said he was “not happy” with the yoga tweet. “That was something that happened that I’m not proud of,” he told CTV News reporter Heather Wright. “I don’t have the opportunity always to vet every single thing that goes on that social media account and so we’re going to do better.”

Most people would chalk this example of the I Think It Was the Wrong Thing to Do, but I Certainly Do Not Apologize Or Take Responsibility And, No, I Won’t Even Pretend I Will Hold Anyone Else Responsible Either, Look, Bad Tweets Just “Happen,” Kinda Like Rain school of political messaging down to mealy-mouthedness or to Peter MacKay having lost control of his staff.

Understandably, most would quickly settle on the second option when, as happened, his staff abruptly, and seemingly without his agreement, ended the CTV interview, cutting short Wright’s line of questioning. But either way, they would be chalking up the wrong tree.

Peter MacKay does not control his team, a team that seemed prepared to bodily drag him out of an interview, even as he protested that his interviewer was just doing her job, but that does not mean he has lost control of his staff or that they are uncontrolled. The truth is, Peter MacKay has never controlled them. He knows this, just like he knows “his” staff will never let him speak out against @PeterMacKay.

It’s @PeterMacKay’s campaign now. Put yourself in Peter MacKay’s shoes. That is, if you can tear your eyes away from @PeterMacKay’s strange grade-school graphic that only sort of implies that playing hockey and invading countries in the Middle East fall into the same general category—and are possibly both Canada’s national pastimes—long enough to tie the laces. Here is a man committed, he says, to keeping the tone of his campaign “civilized,” aiming for a “better discourse” thwarted by @PeterMacKay at every Tweet.

According to sources familiar with Peter MacKay’s struggle with his insidious digital doppelgänger, the conflict is spilling over into the analog world. Picture the scene: after a long day’s work, Peter MacKay returns home after dark and makes himself a bowl of Alphaghettis. He takes the bowl from the microwave and sets it down on the table. Distracted by a notification on his phone, he looks away. When he looks back to the bowl, 280 characters are missing.

Often @PeterMacKay tweets in French. Peter MacKay does not understand those tweets but worries @PeterMacKay is hitting on his wife.

Peter MacKay comes home from walking his neighbour’s dog along a strip of the park he insists is the border between British Columbia and California. There it is on the door, a door upon which an eager staffer has painted with an enormous rainbow flag to indicate that Peter MacKay (who was one of 12 Conservatives who voted against a motion to reopen the same-sex marriage debate in 2006) is nothing at all like Andrew Scheer. It is an electronic lock that Peter MacKay did not order and certainly did not install. He presses the doorbell. There is no answer. What there is is a notification on his phone. He has a DM. “Sup?” it says. It is from @PeterMacKay.

“Let me in!” Peter MacKay replies.

The only response is silence.

Nothing. Not even an oddly proportioned block of text about the variety of surfaces upon which Canadians are warriors.

“Open the odd gay doors, Hal!” Peter MacKay DMs back, trying a third time. “There, that was a meme. A ‘sick reference, bro.’ I am speaking your language, will you listen to me now?”

“Damn you, @PeterMacKay, I said, ‘Open the odd gay door’ not ‘Open the door to people bringing up my $16,000 helicopter ride thing again!’ he cries to the heavens and then whispers, “I wish I could remember your password.”