Michael Coren: How ironic that the most homophobic organization in the world should be the greatest employer of gay men 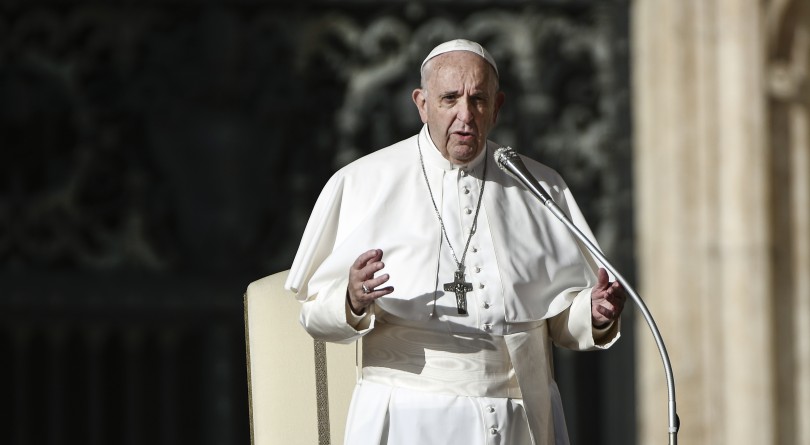 Pope Francis delivers his message to the faithful during the weekly general audience at St. Peter's square in the Vatican on November 21, 2018. (FILIPPO MONTEFORTE/AFP/Getty Images)

Pope Francis has the most extraordinary ability to say and write things that his supporters and staff then have to explain away, justify, obfuscate, or even downright deny. In a new book, The Strength of a Vocation, based on an extended interview with Spanish priest Fr. Fernando Prado, he has said that homosexuality in the priesthood is “something that worries me” and a “very serious” question. He also insists that gay priests who cannot maintain their vows of celibacy should leave the priesthood rather than live “double lives,” and recommends that gay men not be allowed to enter seminaries if their homosexuality is “deep seated.” He goes on to describe homosexuality as being “fashionable,” and that this notion has now entered the Roman Catholic culture.

It is genuinely difficult to know where to begin. The most obvious point is that all Roman Catholic priests are supposed to be celibate, whatever their sexuality, and at first glance it’s bewildering that the pontiff would single out only gay men. The reality, however, is that while the church states in its catechism that “homosexual acts as acts of grave depravity” are “contrary to natural law,” and that “homosexual acts are intrinsically disordered,” most credible studies of the subject have concluded that between a quarter and half of all Roman Catholic clergy are gay. In the 2000 book The Changing Face of the Priesthood, for example, Father Donald Cozzens estimates that as many as 58% of priests are gay, and that percentages are even higher for younger priests. It’s impossible to be certain of course, but the caring professions have long attracted gay men, and the priesthood also enables them to avoid questions about why they are not married. Many of them are celibate, many not. How ironic that the most homophobic organization in the world should be the greatest employer of gay men!

RELATED: Pope Francis has condemned capital punishment. But can his legacy endure?

This has all been a fairly open secret for a long time, but with the hideous revelations in the last few years about the depth and nature of the sexual abuse crisis, the church has looked for scapegoats. In August, Bishop Robert Morlino wrote to Catholics in the Diocese of Madison, Wisconsin that, “It is time to admit that there is a homosexual subculture within the hierarchy of the Catholic Church that is wreaking great devastation in the vineyard of the Lord,” and spoke of “deviant sexual — almost exclusively homosexual — acts by clerics.” He received criticism but also enormous support in the church.

In fact the 2011 John Jay College of Criminal Justice study, commissioned by the U.S. Conference of Catholic Bishops, investigated church abuse and concluded that there was no connection between homosexuality and paedophilia, which is precisely what every other credible study has found. Francis himself has vacillated on the subject, as he has on several others. Sometimes he appears to be progressive, on other occasions, reactionary. Under this Pope, for example, it’s been more difficult for a celibate gay man to enter a seminary than it was under his more conservative predecessors. The reason is that he has reissued and re-emphasized an earlier document, one that was often ignored, demanding that potential seminarians declare their sexuality, and admit if they’d had any form of same-sex attraction in recent years.

Now come these statements. The idea that homosexuality is “fashionable” is in some ways flippant, in others positively grotesque. Brazil has just elected as president a man with violently homophobic views, gay men and women are beaten and even murdered in parts of Africa, the Caribbean, and Russia and Eastern Europe. In 2016, 49 people were killed and 53 wounded others in a terrorist attack inside Pulse, a gay nightclub in Orlando, Florida, and anti-gay hatred is still alive and well in North America and Europe.

Yet the leader of more than a billion Catholics thinks otherwise, and that men with “deep seated” homosexuality, even if they are sworn to celibacy, should be banned from Catholic seminaries. What Francis means by “deep seated” is unclear and one can only assume that he thinks that people can pick and choose their orientation, or be gay or straight on a part-time basis. Either way, it’s shockingly banal. I was a Roman Catholic for many years, and wrote three internationally best-selling books about the church – I can assure His Holiness that there are numerous men with “deep seated” homosexuality closer to him than he might think.

Nearer to home, I know a young gay man in Canada who sacrificed a great deal by leaving his partner and embracing celibacy. He feels called to the Roman Catholic priesthood, but has already been rejected by one seminary because they asked him several times if he was gay, and whether he had experienced same-sex attraction within the last few years. He couldn’t lie. He’s now looking around the world for seminaries that will simply not ask such questions, even though Rome has told them to do so. He thinks he has found one. Thus is the absurd cat-and-mouse game that is being played.

It’s also a crass, gross misunderstanding of sexuality and a colossal double standard. Our sexuality is not defined and confined by our genitalia and what we do or do not do physically. It’s all so much more complex and profound than that. Many husband and wife couples have an extremely limited and even non-existent sex life as they age, but they’re still straight. And here’s the point: potential seminarians who are heterosexual and who admit, quite naturally, to sexual or romantic temptation are never turned away for such a reason.

So the nonsense continues, but this time with a more sinister and discriminatory edge. If Francis seriously wants to address abuse, he needs to ordain women, remove the need for compulsory celibacy, dismantle clericalism, and democratize the church, not single out some very fine men for disapproval. That’s an incredibly tall order, and if it does happen will take time, prayer, and enormous effort – but then Rome wasn’t built in a day, and Roman Catholicism won’t be rebuilt in one either.