Putin is the new Stalin. Here's why his poisonous gangland oligarchy will prevail

Vladimir Putin has been in power for 18 years now — sneering at international institutions and getting away with murder. Sunday's election will only serve to extend his reach to 2024. 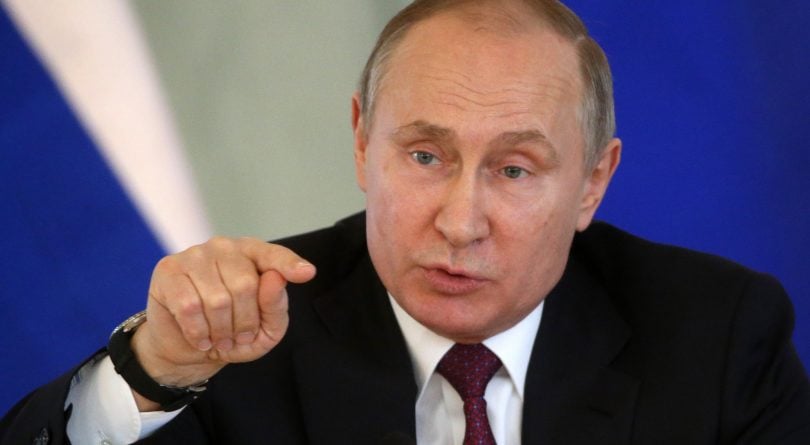 Among the many reasons you can be confident that the 65-year-old former KGB lieutenant-colonel Vladimir Vladimirovich Putin will win re-election as Russia’s president this coming Sunday, the most persuasive is that last December, Putin’s primary challenger was conveniently disqualified from running for office.

Alexei Navalny, the popular 42-year-old anti-corruption crusader and leader of the Progress Party, had his name struck from the Central Electoral Commission’s list of approved candidates owing to convictions on embezzlement charges that the European Court of Human Rights has declared to be political frame-ups.

READ: Russia is a mess but it’s still playing the West

Three years ago, the outspoken activist and anti-Putin protest organizer Boris Nemtsov was assassinated a short walk from the Kremlin. The hitman and four of his accomplices were sentenced to varying jail terms after a trial last July that Nemtsov’s family called a cover-up: the court failed to determine who shelled out $250,000 for the killing. Last March, the prominent Putin critic Denis Voronenkov was shot and killed in broad daylight in the Ukrainian capital of Kiev in what Ukrainian President Petro Poroshenko called an “act of state terrorism by Russia.”

Vladimir Putin’s fingerprints are also all over the poisoning by nerve agent of former Russian spy Sergei Skripal, 66, and his daughter Yulia, 33, who were found unconscious on a park bench in Salisbury, Wiltshire March 4. British security services say the deadly nerve agent Novichock was the weapon, and it may have been planted in Yulia’s luggage before she left Moscow to visit her father in Britain. Sergei Skripal was exchanged in a UK-Russia “spy swap” in 2010. Both Sergei and Yulia remain in critical condition.

The incident has triggered a deep diplomatic crisis, with the United States, Germany, France and Canada backing British Prime Minister Theresa May in her conclusion that there is “no plausible alternative explanation” except Russian culpability in what is the first use of a nerve agent in Europe since the Second World War. Novichick was developed in a Cold War Russian laboratory during the 1970s. The Kremlin’s hand in the Skripals’ poisoning would certainly fit a pattern.

At least ten Russian diplomats, activists, and defected spies have died in suspicious circumstances over the past dozen years or so. The most notorious case was the murder of Alexander Litvinenko, a former Russian secret service officer who was granted asylum in Britain in 2001. Litvinenko died in November, 2006 after being admitted to hospital, suffering acute radiation poisoning from minute traces of Polonium-210.

The Organization for the Prohibition of Chemical Weapons has been brought to help the British investigation in the Skripal incident and Prime Minister May has announced a series of measures in response – mainly the expulsion of diplomats. The Kremlin’s response has been mockery. “The temperature of Russia-UK relations drops to minus 23,” a Russian embassy official in London quipped, “but we are not afraid of cold weather.”

There’s no reason to imagine that the diplomatic crisis will cause Putin any fallout at the polls on Sunday, reckons Mark Galeotti, senior researcher with the Institute of International Relations in Prague. “While it is possible that much more is being done behind the scenes, or that further measures will follow, for the moment the Kremlin is likely quietly satisfied with the outcome.”

After Putin invaded the Republic of Georgia in 2008, his approval ratings went up. After invading Eastern Ukraine and annexing Crimea in 2014, Putin’s ratings skyrocketed. According to the Russian Public Opinion Centre, 80 per cent of Russians supported the Crimean annexation. The Syrian Observatory for Human Rights reckons at least 6,600 civilians have been killed by Russian bombers since the Barack Obama White House invited Putin’s intervention in Syria after President Bashar al-Assad slaughtered hundreds of civilians with bombs filled with sarin gas in 2013. Putin’s intervention on behalf of the Assad regime has cost him nothing, at home or abroad.

Journalists are frequently found among Putin’s domestic critics who end up dead under mysterious and not-so mysterious circumstances. The investigative journalist Nikolay Andrushchenko, founding editor of the independent newspaper Novy Peterburg and the survivor of several assaults and bogus legal proceedings over the years, was beaten unconscious and left lying in the street near his house last March. He died several weeks later. A few days after Andrushchenko’s death, Dimitry Popov, editor of the investigative journal Tom M, was found dead behind his home in Minusinsk with five bullets in his back. The Committee to Protect Journalists counts 38 journalists murdered in Russia since the 1990s.

Only a month before Alexander Litvinenko’s 2006 death by Polonium-210 in London, the journalist Anna Politkovskaya was murdered in the elevator of her Moscow apartment building. The assassination was widely believed to have been carried out on Putin’s direct orders. As in the case of Boris Nemtsov’s 2015 assassination on a bridge near the Kremlin, five men were eventually convicted and sentenced for Politkovskaya’s murder, but no one was charged for ordering and bankrolling the operation.

With Navalny off the ballot in Sunday’s election, no serious vote-getter remains among the field of seven candidates opposing Putin. If by some strange wrinkle Putin fails to win an absolute majority, Russians will go back to the polls for a run-off vote April 8. Putin will win no matter what happens. He could simply put the fix in to clinch his own re-election if he wanted to. After all, Washington is still in upheaval after last year’s findings by the CIA, the FBI, the National Security Agency and the Office of the Director of National Intelligence that the Kremlin had seriously monkeyed with the 2016 U.S. presidential election by cyberhacking and the cunning circulation of disinformation.

Putin has been in power for 18 years now, ever since the doddering and shambolic Boris Yelstin resigned in 1999. Over the following decade, rules governing succession obliged Putin to swap the presidency for the prime minister’s office a couple of times with Dmitry Medvedev, but Putin settled comfortably back into the presidency again in 2012. A constitutional amendment extending the presidency’s term to six years allows Putin to stay on until 2024.

The FIDH report sets out in exhausting detail the way Russia’s entire political and legal infrastructure has been rigged in Putin’s favour and placed at the service of the ruling billionaires in Putin’s United Russia party. The report is a rare, in-depth look into how a 21st century tyranny actually works.

The 50 new laws enacted since 2012, the first year of Putin’s current term, outlaw any “questioning of the integrity of the Russian nation,” effectively banning criticism of the Kremlin’s conduct in Crimea, Eastern Ukraine, or Syria. The Kremlin’s new powers severely curtail religious freedoms, hamstring international observers, restrict communication among and between civil society organizations, censor the news media and harass and criminalize gay people. New laws tightly control the way Russian history is taught to the point of abolishing criticism of the conduct of the Red Army during the Second World War.

“The Putin regime’s increasing aggression and authoritarianism at home is a precondition of its foreign aggressive policy,” the FIDH observes.

Vladimir Vladimirovich Putin is the new Joseph Vissarionovich Stalin. He’s as a powerful as a pre-Soviet tsar. He’s obscenely rich. He kills troublesome opponents. He sneers at NATO, the G7, and the United Nations, he gets away with murder in London, Donbass, Sevastopol, Ghouta and Aleppo.

And he should be expected to win re-election quite handily at the polls this Sunday.