Quebec puts the heat back on Trudeau

Tom Mulcair: With the Legault government pushing the language law debate again, the federal Liberals will be put to the test—and can't afford to fail 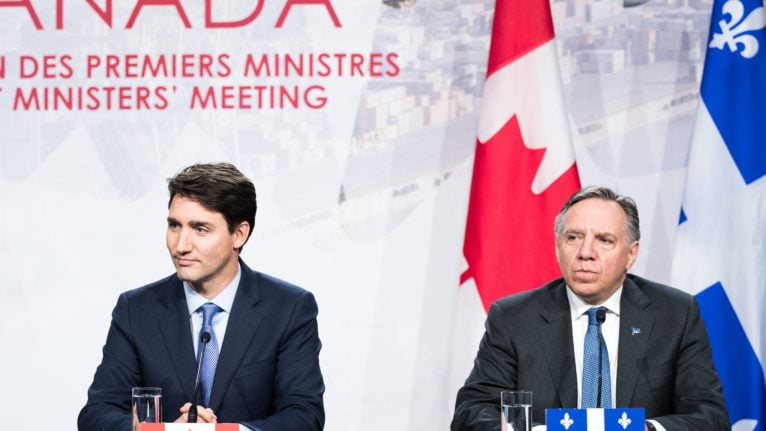 Trudeau sits with Legault during a meeting in Montreal on Dec. 7, 2018 (MARTIN OUELLET-DIOTTE/AFP via Getty Images)

The Legault government has pushed the language file onto the front burner and it’s Justin Trudeau’s Liberals who have to be careful not to get singed.

Any port in a storm. The abject incompetence of the Quebec government in dealing with the COVID-19 pandemic has seen it search for any distraction and debating language laws is always great sport in La Belle Province.

Legault has some outstanding ministers in his cabinet, most of whom have gone about their business with skill and competence. Then there’s Simon Jolin-Barrette.

One of the younger members of Legault’s team, he has distinguished himself as an opponent of minority rights. He is the author of Bill 21 that openly discriminates against religious minorities in Quebec, targeting Muslim women in particular. His missteps as immigration minister, where he stirred up a firestorm of opposition, forced Legault to pull him from that job. As Justice minister, it was hoped he could stay out of trouble. Not for long, as it turned out, because he’s also responsible for the language file. Never one to shy away from publicity he sees this as a chance to get back into the limelight, claiming that language laws needed to be reinforced in particular by doubling the number of language inspectors and expanding Bill 101 to include federally regulated companies.

A fiscal conservative, Legault is in no hurry to push more language bureaucrats onto the private sector but he needed to change the channel.

That’s where the opening on the federal front can be a lifesaving political win-win for Legault putting the heat on Trudeau instead.

During the 2019 election, not a single federal leader was willing to oppose Quebec’s law banning the wearing of religious symbols for many public sector jobs, including teaching. Trudeau said he might back a Court challenge but so far has failed to intervene to  help the women who are battling it in court. At the time, Andrew Scheer came out four-square in favour of Quebec’s right to discriminate, a position shamefully parroted by Erin O’Toole during his recent meeting with Legault who boasted that the new Conservative leader’s position was a “victory for Quebec!”

Quebec newspapers clarioned that O’Toole was backing the province in everything from its opposition to the Muslim headscarves, to extending its language laws to the federal government. The same O’Toole who’d been part of a Conservative government that had created an office to protect religious minorities…in other countries!

The French have a lovely word for “pandering”: clientélisme, as in, the customer is always right. It’s one thing to tell people what they want to hear. Quite another to convince people you believe anything.

Protection of minority rights in general, and linguistic rights in particular, have long been seen by Liberals as part of their identity. That Trudeau was able to get squeezed into silence and inaction on religious minority rights came as a surprise to many. On the issue of language rights, things could quickly get complicated for Trudeau and he cannot afford to get caught wrong-footed on a defining issue again.

It’s easy to agree with the basic premise that Quebec workers should have the right to receive their communications from their employer in French. They’ve had that right with provincially regulated companies since 1977 and most federally regulated private employers, though not obliged to, actually follow that basic rule.

Chartered banks, for example, have respected that right for years and federal civil servants have similar protection under the Official Languages Act. There are tens of thousands of employees (ports, railroads etc.) who work for federally regulated companies that have never had that right. If this were the only issue, it may be easy to fix. It’s not.

That’s where the gamesmanship will begin on both sides.

When I was NDP leader I backed expanding those language rights to workers in federally regulated companies in Quebec. I still believe it’s a good idea but our version was judged as diluted by the Bloc back then. They will be pushing for full implementation of all aspects of  Bill 101, which can be highly bureaucratic.

The federal Liberals, on the other hand, will have another problem. They will be arguing for symmetry of language rights across the country even though there’s never been a demand for workers outside Quebec to have that right in the private sector. It will be a nettlesome problem for Trudeau whose reflexes in the language file have sometimes been lacking. He once famously questioned the very existence of separate French schools in New Brunswick and was quickly forced to apologize.

The issue on the table now is extremely complex and will require Trudeau to accept the principle of asymmetric language rights, something he’ll be loath to do.

Meanwhile, with the Conservatives, the Bloc, the NDP and the Greens supporting the extension of Bill 101 to federally regulated private businesses, Trudeau cannot block the legislation even if he wanted to. Just voting against the principle, however, could cost him heavily in Quebec.

I spent a good chunk of my career working on the language file both at the advisory Conseil de la langue française in the Quebec government and at the language rights group Alliance Québec. These issues are indeed complex legally, administratively and socially. The opposition parties will have it easy. They will be playing pétanque with Trudeau’s head as the target.

The Official Languages Act has just celebrated its 50th birthday. It is a defining characteristic of modern Canada. Along with multiculturalism, minority language rights are inscribed in the Constitution. There was an opportunity on that anniversary to reopen the federal language law to modernize, adapt and expand. It’s still not too late but it can’t be an exercise seen as a stalling tactic.

When it came time to replace Graham Fraser as official languages commissioner, the Liberal reflex of steering an old guard partisan to the job turned into a disaster for Trudeau and his minister, Mélanie Joly, who retreated in disorder. They cannot afford to show that type of ill-preparedness again.

If handled properly, this could turn into a shining moment for the Liberals. They can go back to their playbook, and tackle the minority religious and minority language rights issues head-on. There is a lack of seasoned experience around Trudeau, who has been clobbered on issues of integrity for months now. He’s going to have to be his own guide on this one. Showing strength and resolve on core Canadian rights issues could be a game-changer for Trudeau.