Questions for Erin O'Toole the Frontrunner

Stephen Maher: If O'Toole hopes to keep his 'freight train' on the tracks, he'll need to address a lot of tough issues about the economy, climate, race and gun control 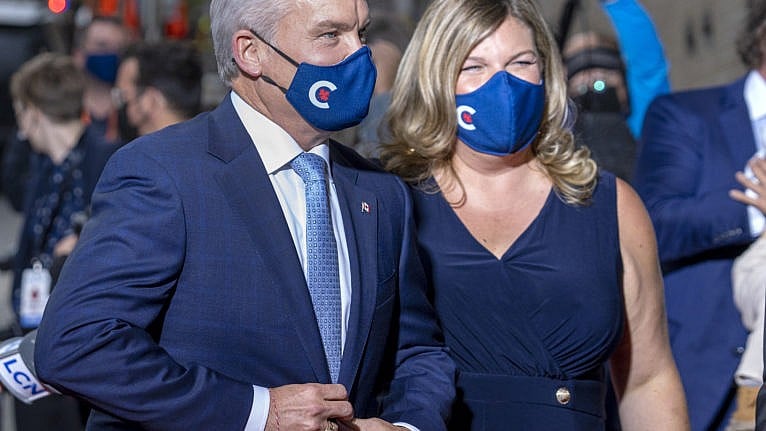 O'Toole and his wife Rebecca arrive for the TVA French language debate in Montreal on Sept. 2, 2021 (Frank Gunn/CP)

Erin O’Toole’s “is shaping up to be a political freight train,” pollster Nik Nano said Friday after looking at the latest numbers in his rolling poll: CPC 36, LPC 31, NDP 20.

Canadians, back from the cottage and the campground, are finally tuning into this election, and they seem to have decided that they like O’Toole and might have had enough of Justin Trudeau.

It is too early to say what the outcome will be, but not too early to conclude that Trudeau made a colossal blunder when he called an election that nobody but him wanted, for the purpose of winning a majority, which he will not now get.

He seems to have overestimated his own appeal and the firmness of the support he picked up during the pandemic, and dramatically underestimated the political skills of O’Toole, a disciplined and blandly cheerful guy with lots of plans.

The shift mimics the change we saw in Nova Scotia in August, where voters cheerfully ejected a popular government that did a better job managing COVID-19 than Trudeau did. Voters typically are not very interested in what you have done for them in the past, and why should they be?

There is still a fair bit of track ahead of us before the O’Toole Express pulls into the station, and it is not quite certain that he will win, but it seems sure that Trudeau will lose. His best hope now seems to be to hang on with a weaker minority, after which he would likely be forced to arrange a hurried succession plan to give his party a champion with a better chance of keeping the Conservatives out.

But there is a holiday weekend happening—in which families are chatting about politics—and two debates at the end of the week. The real campaign has just started.

Polls show that Canadians have not yet realized that they are likely to have a new prime minister, and once they realize that, there may be some settling, some reassessments, and the Liberals may be able to harvest some votes from the left with a desperate last-minute appeal to wavering New Democrats afraid of O’Toole. The problem this time is that O’Toole is not as scary as the opponents Liberal leaders have faced for decades. He is a more centrist figure than Preston Manning, Stockwell Day, Stephen Harper or Andrew Scheer. He appears to be a progressive Conservative.

In a way, this election takes us back to 1989, when Deborah Grey was elected as the first Reform Party MP, before which Canada had a stable three-party system, and there were always Red Tories in the Conservative party.

To get to this point, O’Toole has been patient, disciplined and somewhat conniving. Trudeau appears to have believed his own propaganda and misjudged the mood of the country, so a Revenge-of-the-Nerds narrative is coalescing that the Liberals will find hard to disrupt.

But I’m glad we are not going to vote tomorrow, because O’Toole is surprisingly slippery, and he needs to answer a number of nasty questions before we get to the station. Trudeau has no choice but to set aside his sunny ways and throw himself on the tracks.

He got started in the TVA debate Thursday night, pressing O’Toole effectively on whether the Conservatives would reverse a ban on assault weapons, which O’Toole denied.

O’Toole, demonstrating poise and a professional level of disingenuousness, declined to be pinned down, insisting that he would not reverse the ban, which he will.

The question hinges on how you define an assault rifle. After the mass shooting in Nova Scotia last year, the Liberals added a number of semi-automatic rifles to the prohibited list, and that ban is what Trudeau was referring to. O’Toole was referring to a ban on automatic weapons, which was brought in by Trudeau pere in 1977.

He refused the next day to be pinned down on what ban he was referring to. This is typical clever-politician-slithering-off-the-hook behaviour, which I think we will see is characteristic of O’Toole. He already has the kind of “message discipline” that Trudeau took years to learn. On one hand, I admire his professionalism. On the other hand, I want him to have to answer the question.

To pin him down will require persistent, bloody-minded questioning by journalists. The Globe reporters, bless their hearts, did so by the end of Friday, by which point the headline on their site was: Conservatives Would Repeal Ban on Guns Used in École Polytechnique, Nova Scotia Mass Shootings. I don’t think that is the headline O’Toole wanted Ontario soccer moms in the 905 to read with their coffee on the Saturday of the long weekend.

Now that he is the front runner, O’Toole has a lot of questions to answer, about the economy, climate, race, gun control, private health care, what powers he is willing to surrender to Francois Legault, and, ultimately, whether he will govern in a way that will be acceptable to soccer moms and also to the cowboys, gun nuts, climate skeptics and bible pounders who consider his party their property.

It doesn’t look like it will be easy for him to keep that freight train on the tracks until Sept. 20, but it is not supposed to be easy to become Prime Minister of Canada.