Recreating the Tim Hortons menu, for the better

Corey Mintz: So long Dream doughnuts, Oreo iced capps and specialty teas (this isn't Buckingham Palace). My version of the Tim Hortons menu, which currently features over 90 items, is going down to 18. 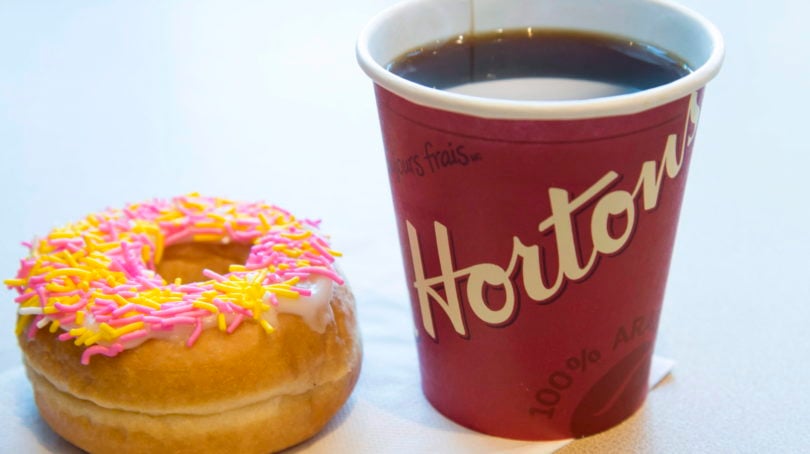 A coffee and donut from Tim Hortons is shown at a Coquitlam B.C., location on Thursday, April 26, 2018. THE CANADIAN PRESS/Jonathan Hayward

It shouldn’t have to be stated, but I am not a customer service representative for Tim Hortons. I have, however, written about the formerly Canadian chain of quick service franchised cafés now owned by Restaurant Brands International (RBI), a subsidiary of investment firm 3G Capital, often enough that people come to me with their Tim Hortons problems.

And more than any other recurring issues—mistreatment of employees, over-expansion of locations, et cetera—people complain about the menu. Some tell me how they were done with Tim Hortons when the chain introduced bagels or Beyond burgers. Others tell me that Tim Hortons lost their business when they discontinued the sugar twist or some other preferred item.

Everyone seems to know what should be on the Tim Hortons menu, except Tim Hortons. After recently experimenting with faux meat and then removing it, they are now featuring fancified versions of their doughnuts that cost twice as much but taste just as bad. So it doesn’t seem like the company has much of a hold on their core competency.

More tellingly, same-store sales dropped 1.4 per cent in the third quarter of 2019, as opposed to RBI’s other assets, Burger King and Popeyes, which saw major sales increases during the same period. That means the suggestion box should be in use.

Having listened to readers, and having recently eaten through the entire menu in one sitting (after which, racoons tore open my garbage to lick cheese residue off the wrappers), I feel qualified to weigh in on what they should be serving.

Let’s say we were starting from scratch, and we had 4,300 locations in Canada with a dedicated clientele, loyal to at least some portion of the Tim Hortons experience. What would we serve?

We have to begin with doughnuts.

The often class-based debate over doughnuts (dollar doughnuts versus fancy five-dollar doughnuts) overshadows the real conflict surrounding this confection—yeast style versus cake style. While I love a good, fresh, yeast-risen doughnut, Tim Hortons doesn’t make these. Not in my memory. I’ve never had one that didn’t remind me of a droopy-jowled senator who should have retired three-elections ago. And if they can’t be served fresh, they shouldn’t be served at all. Cake doughnuts, whatever else you think of them, have a longer shelf life. If we absolutely had to serve a yeast doughnut, I’d make a proper glaze for it, one that lightly coats and clings to the top, rather than whatever they use now, which has the snap and sheen of the enamel you use to cover a crack in the bathtub.

The Dream doughnuts, the faux-gourmet line of strawberry, chocolate and dulce de leche recently introduced, have to go. In fact, most of the doughnuts are cancelled.

Here are the good ones: sour-cream glazed, chocolate glazed, toasted coconut and old-fashioned plain. Keep those and trash the rest. Goodbye Boston cream, Canadian maple, blueberry, strawberry, double chocolate and flaccid apple fritter. And I’d redirect the R&D department, which is undoubtedly wasting their time developing a cronut, to instead focus on improving our existing baked products. We would keep the fan-favourite Timbits.

While there are about 17 hot beverages on the menu right now, from caramel macchiato to apple cinnamon fog, and the most essential, the one you can’t imagine the company without, is coffee. So let’s at least serve that.

People have strong opinions on the quality of Tim Hortons coffee. I don’t have any dog in that fight. But I’d like to switch to Fair Trade beans to know for certain that the company’s main product wasn’t taking advantage of the brutal conditions and poor pay that is endemic throughout the agricultural industry. Tim Hortons has a web page devoted to an initiative called the Tim Hortons Coffee Partnership, which states: “In 2005, we undertook a comprehensive analysis of mainstream coffee certification models including Fairtrade, Rainforest Alliance, UTZ Certified, 4C Association, and others. As a result of this study, the partnership was established to address sustainability issues we felt could work in conjunction with their important work.”

From Red Lobster to The Cheesecake Factory, I’ve read a lot of chain restaurant sustainability web pages. So let me translate: this means they looked at the requirements from trusted NGOs, made up of people who have devoted their expertise toward creating guidelines for ethically purchasing of coffee beans, and decided to forgo certification by these NGOs in favour of asking customers to trust that the company is doing its best. The problem with self-regulation is that it doesn’t work. That’s what regulations and regulating bodies are for. Tim Hortons says their program is monitored by a third-party verification organization called Control Union Certifications. But if you’re truly supporting farmers in developing countries, and paying them what they deserve for their product, how can you sell coffee for $1.59 a cup?

French vanilla stays for my wife, who has multiple sweet teeth and hates coffee. Every other hot beverage on the menu, except for steeped tea, is gone. That includes specialty teas like honey lemon and chamomile—this isn’t Buckingham Palace.

In the interest of salvaging something from the menu, I’d like to keep one of the breakfast sandwiches and the chili. So long hashbrown doorstops and various ingredients congealed inside a wrap.

But let’s eliminate the sugar in the chili. And as long as we’re offering chili, let’s have a few other options of soups and stews, hot items that can be mass produced in a central commissary, kept warm and ladled out within a quick-service model. As a compromise, how about pre-made sandwiches with fresh bread? If the staff of an Autogrill between Naples and Bologna can toss a pre-assembled prosciutto sandwich in the panini press, so can our employees. The trick is to have a menu of no more than six soups and six sandwiches, rather than confounding low-paid workers with the tasks of executing cinnamon sausage French toast breakfast sandwiches, chipotle cheddar chicken wraps, or dishing out nightmare versions of croissants, chicken fingers and potato wedges. If you own Popeyes but can’t produce an edible chicken finger, don’t serve chicken fingers. Or, take advantage of the RBI family and develop a Tim Hortons variation of the fried chicken sandwich that’s been such a hit for Popeyes. Maybe a smaller portion of Popeye’s chicken folded into a breakfast sandwich with eggs and cheese? That way we’re using a trusted resource, but making the sandwich different enough so there’s no threat of cannibalizing sales at Popeyes.

Cold beverages, like the Oreo iced capps that were dragging down sales, those are gone before I’m back from lunch. My version of their menu, which currently features over 90 items, is down to 18. That seems manageable.

And here’s what would happen with Uncle Cornelius’s Old-Timey, New-Timey, Tim Hortonarium. We’d go out of business. And fast. Because the Tim Hortons brand, for all its faults and mismanagement, is not built on a consumer base willing to pay more for quality food. It’s based on poor-quality food, sold at discount prices, ginned up with a hint of nostalgia and patriotism. My version of Tim Hortons’ menu is shorter, but demands better ingredients and more effort preparing them. It would increase food costs and labour costs, necessitating an increase in menu prices. And there’s little-to-no possibility of generating the kind of increased revenue to justify the new additions to operational costs. I wouldn’t be able to attract quality-minded consumers to a brand known for cheap prices. And I wouldn’t be able to convince the existing price-minded consumers to pay more for products they were already happy with.

That’s why I should not be running a restaurant, never mind a multinational chain of restaurants operated by franchisees who have little say over what is on their menus.

While it’s hard to ignore my biases, the idea of what I would put on the menu at Tim Hortons is a fun thought experiment. And similar to the age-old brain teaser we all ask ourselves: What if Fantastic Four co-creator Jack Kirby switched projects with Spider-Man co-creator Steve Ditko? Would Spidey have fought increasingly bizarre aliens every other issue? Would the Fantastic Four have become brooding martyrs, unable to find love?

It’s hard to say. Because the classic versions of those characters are so familiar and because they are indelibly linked to their creators. Food, unlike comic books, movies or music, only exists in the present. We can save a recipe or a photo. But we can’t actually experience what a Tim Hortons meal was like in 1964. So I’ll have to take people’s word that it used to be better. And the version that exists today was not formed by a chef, tinkering around in the kitchen, but by a committee, based on sales charts and market trends.

And at a certain point, like Spider-Man or the Fantastic Four, which came to be owned by Disney, a chain restaurant cannot be managed like an independent operation, where a chef or owner can decide to rewrite the entire menu.

RBI and its parent company, 3G Capital, have clearly overextended the Tim Hortons menu. And they’ve failed to get ahead of the inevitable bad press stemming from the company’s contemptible employment practices, like eliminating paid breaks or locking out workers for striking over 10 cents. But ultimately, RBI understands the brand’s core competency—selling junk food at junk prices. They’ve just got to trim the fat off the menu, occasionally reintroduce discontinued items (for a limited time only), like eclairs or bread bowls, and have a crisis communications strategy ready for the next time a franchisee gets busted for being awful to employees.

Because if you can’t raise prices and you can’t pay people a living wage, strawberry doughnuts are just a silk hat on a pig, and customers aren’t going to fall for it.