Opinion: The response to an explosive revelation late in the 2011 federal campaign suggests that the lawsuit against Doug Ford might not harm his chances 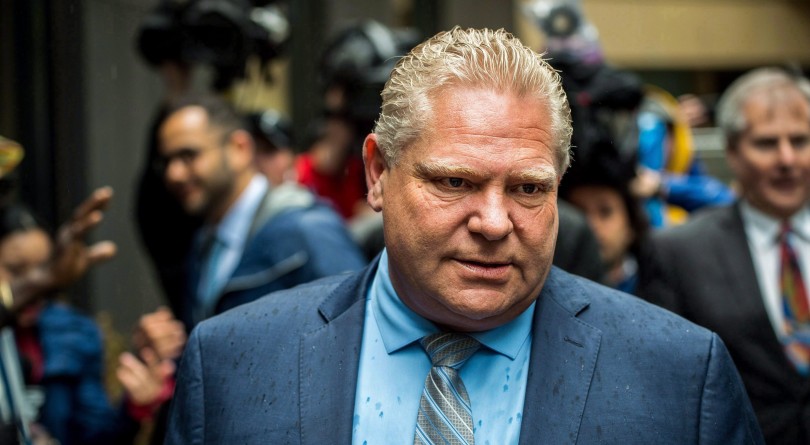 Ontario Progressive Conservative leader Doug Ford holds a rally to speak about Hydro One in Toronto on Tuesday, May 15, 2018. THE CANADIAN PRESS/Aaron Vincent Elkaim

“We’re about to publish something, and I think you’ll like it.”

Those words, or something to their effect, were spoken to me by a then reporter for Sun Media minutes in advance of a pivotal rally on Apr. 29, 2011, in which then-Toronto mayor Rob Ford endorsed then-Prime Minister Stephen Harper (my then-boss) for another term in office.

Minutes later, the story broke. It recounted how the late Jack Layton, whose NDP was surging going into the final week of the campaign, had been allegedly found naked by police in 1996 in a downtown Toronto massage parlour whose employees were known practitioners of the frotte et tire. Well, then. Layton quickly admitted he was there—and found naked—but denied any impropriety, while his wife, the former MP Olivia Chow, angrily decried the smear.

In the movies, this is the point where the shady political operatives high-five themselves as their opponent succumbs to scandal. In real life, however, the response was the polar opposite.

Three days away from the election, we Tories were worried we’d be blamed for the leak, and that sympathy for Layton over the obvious smear, true or not, would push him over the top. We frantically denied involvement and were relieved when other journalists revealed a Liberal fixer had been trying to ship the same story in the run-up to the 2008 federal election. The source of the story, widely believed to be a former Toronto police officer, has never been confirmed.

I have no idea if similar words were spoken to members of the NDP or Liberal press teams minutes before the Toronto Star published their pre-election bombshell outlining the particulars of a $16.5-million suit in Ontario Superior Court, in which Renata Ford, the widow of Rob Ford, accuses Rob’s brothers Doug and Randy of impropriety in the handling of the Ford estate and Deco Labels, the Ford family business, days before the 2018 provincial vote.

The similarities between the late-campaign revelations for Layton in 2011 and Ford in 2018 aren’t fulsome. For one thing, the Star’s reporting is based on a suit filed in open court. We also know the identity of the actor trying to bring Doug Ford to heel, even if we don’t have a clear picture yet of the evidence for the claims in the suit, which are yet to be proven in court. The claim is full of allegation, if largely absent on evidence.

But that explosive story still does provide something of a guide in answering an important question as the election enters its final days: what impact will the report ultimately have on the election? The reality is: not much.

The blessing and the curse for the Ford campaign is that voters won’t have a chance to have the full set of facts presented to them before they mark their ballots on June 7. It’s a blessing because the campaign can, as it did yesterday, downplay the report without producing its own evidence (citing court as the appropriate venue), while expressing sympathy for Rob Ford’s children (i.e. the real victims). The curse—the unproven allegations—now hang over an already-Marmite candidate who doesn’t need any help pushing up his negatives ahead of the vote.

Advance voting has also been brisk so far, with 768,895 Ontarians having already cast their ballot, according to Elections Ontario. That’s about 7.5 per cent of Ontario’s eligible voters whose decisions are already locked in.

And Ontarians who haven’t voted yet might not have the time—or the inclination—to wade through the particulars of the suit, but they will instinctively know the timing stinks and that the extortion motive is plausible. Why now, they may think, other than to smear the PC leader? This smear heuristic should help to insulate Ford from any fallout.

Indeed, Ford has moved quickly to raise that spectre, calling Renata Ford’s late declaration an act of extortion. “I have also stood by my brother and his family through so many of their challenging times, and will always be there for (Rob and Renata’s children),” Ford said in a statement. “Renata’s lawyers have been clear to us throughout this campaign, that either we hand over money, or they would go public with these false claims, and that is exactly what they have done, with three days to go until the election.”

And the Ford family hasn’t held back in defending Doug. To add a layer of tragedy to the mix, the Ford campaign released a statement from the candidate’s mother, Diane, calling the allegations “baseless” and referencing Renata Ford’s “serious struggles with addiction.” Oof.

Despite making it a messy family affair themselves, the dual statements also place handcuffs on the NDP and Liberals should they be tempted to try and capitalize on the revelations in the suit. True or not, who will disagree that court is the appropriate venue for the determination of truth, and who will dare traffick in innuendo over what is clearly a delicate family situation? So far the Liberals and NDP have kept quiet.

For their part, media will now be working overtime to source additional information about the financial health of Deco Labels, or the personal finances of the members of the Ford family.

In the meantime, Doug Ford has no choice but to soldier on promoting his team and their “modest, responsible plan,” while hammering the “radical” and expensive NDP—and hoping that no one publishes any more stories he won’t like.